Marwari (Mārwāṛī; also rendered Marwadi, Marvadi) is a Rajasthani language spoken in the Indian state of Rajasthan. Marwari is also found in the neighbouring state of Gujarat and Haryana, Eastern Pakistan and some migrant communities in himalayan country Nepal. With some 7.9 million or so speakers (ce. 2001), it is one of the largest varieties of Rajasthani. Most speakers live in Rajasthan, with a quarter million in Sindh and a tenth that number in Nepal. There are two dozen dialects of Marwari.

Marwari is popularly written in Devanagari script, as is Hindi, Marathi, Nepali and Sanskrit; although it was historically written in Mahajani, it is still written in the Perso-Arabic script by the Marwari minority in Eastern Pakistan (the standard/western Naskh script variant is used in Sindh Province, and the eastern Nastalik variant is used in Punjab Province), where it has educational status but where it is rapidly shifting to Urdu.[4]

Indian Marwari has no official status in the government in India and is not used as a language of education. Marwari is still spoken widely in and around Bikaner and Jodhpur.

It is said that Marwari and Gujarati evolved from Gujjar Bhakha or Maru-Gurjar, language of the Gurjars.[5] Formal grammar of Gurjar Apabhraṃśa was written by Jain monk and eminent Gujarati scholar Hemachandra Suri. 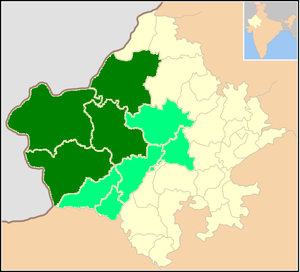 Marwari is primarily spoken in the Indian state of Rajasthan. Marwari speakers have dispersed widely throughout India and other countries but are found most notably in the neighbouring state of Gujarat and in Eastern Pakistan. Speakers are also found in Bhopal. With around 7.9 million speakers in India according to the 2001 census.[6] There are several dialects: Thaḷī (spoken in eastern Jaisalmer district and northwestern Jodhpur district), Bāgṛī (near Haryana), Bhitrauti, Sirohī, Godwārī.[7]

Indian Marwari [rwr] in Rajhastan shares a 50%–65% lexical similarity with Hindi (this is based on a Swadesh 210 word list comparison). It has many cognate words with Hindi. Notable phonetic correspondences include /s/ in Hindi with /h/ in Marwari. For example, /sona/ 'gold' (Hindi) and /hono/ 'gold' (Marwari).

Pakistani Marwari [mve] shares 87% lexical similarity between its Southern subdialects in Sindh (Utradi, Jaxorati, and Larecha) and Northern subdialects in Punjab (Uganyo, Bhattipo, and Khadali), 79%–83% with Dhakti [mki], and 78% with Meghwar and Bhat Marwari dialects. Mutual intelligibility of Pakistani Marwari [mve] with Indian Marwari [rwr] is decreasing due to the rapid shift of active Pakistanese speakers to Urdu, their use of the Arabic script and very different sources of support medias, and their separation from Indian Marwaris, even if there are some educational efforts to keep it active (but absence of official recognition by Pakistani or provincial government level). Lots of words are being borrowed from other major Pakistani languages.[4]

/h/ sometimes elides. There are also a variety of vowel changes. Most of the pronouns and interrogatives are, however, distinct from those of Hindi.[citation needed]

Marwari languages have a structure that is quite similar to Hindustani (Hindi or Urdu).[citation needed] Their primary word order is subject–object–verb[9][10][11][12][13] Most of the pronouns and interrogatives used in Marwari are distinct from those used in Hindi; at least Marwari proper and Harauti have a clusivity distinction in their plural pronouns.[citation needed]

Marwari vocabulary is somewhat similar to other Western Indo-Aryan languages, especially Rajasthani and Gujarati, however, elements of grammar and basic terminology differ enough to significantly impede mutual intelligibility. In addition, Marwari uses many words found in Sanskrit (the ancestor of most North Indian languages) which are not found in Hindi.

Retrieved from "https://en.wikipedia.org/w/index.php?title=Marwari_language&oldid=937695085"
Categories:
Hidden categories:
The article is a derivative under the Creative Commons Attribution-ShareAlike License. A link to the original article can be found here and attribution parties here. By using this site, you agree to the Terms of Use. Gpedia Ⓡ is a registered trademark of the Cyberajah Pty Ltd.