Massachusetts Hall is the oldest surviving building at Harvard College, the first institution of higher learning in the British colonies in America, and second oldest academic building in the United States after the Wren Building at the College of William & Mary.[2][3] As such, it possesses great significance not only in the history of American education but also in the story of the developing English Colonies of the 18th century. Massachusetts Hall was designed by Harvard Presidents John Leverett and his successor Benjamin Wadsworth. It was erected between 1718 and 1720 in Harvard Yard. It was originally a dormitory containing 32 chambers and 64 small private studies for the 64 students it was designed to house. During the siege of Boston, 640 American soldiers took quarters in the hall. Much of the interior woodwork and hardware, including brass doorknobs, disappeared at this time.

While designed as a residence for students, the building has served many purposes through the years. After Thomas Hollis donated a quadrant and a 24-foot telescope in 1722, for example, the building housed an informal observatory. 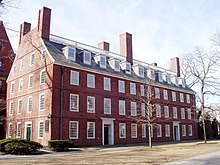 Massachusetts Hall is the oldest surviving building at Harvard College.

Currently, the President of the University, Provost, Treasurer, and Vice Presidents have offices that occupy the first two floors and half of the third. Freshmen reside in the fourth floor.

Retrieved from "https://en.wikipedia.org/w/index.php?title=Massachusetts_Hall_(Harvard_University)&oldid=947758142"
Categories:
Hidden categories:
The article is a derivative under the Creative Commons Attribution-ShareAlike License. A link to the original article can be found here and attribution parties here. By using this site, you agree to the Terms of Use. Gpedia Ⓡ is a registered trademark of the Cyberajah Pty Ltd.