This is the latest accepted revision, reviewed on 18 February 2020.
Jump to navigation Jump to search
United States Supreme Court case

McCulloch v. Maryland, 17 U.S. (4 Wheat.) 316 (1819), was a U.S. Supreme Court decision that defined the scope of the U.S. Congress's legislative power and how it relates to the powers of American state legislatures. The dispute in McCulloch involved the legality of the national bank and a tax that the state of Maryland imposed on it. In its ruling, the Supreme Court established firstly that the "Necessary and Proper" Clause of the U.S. Constitution gives the U.S. federal government certain implied powers that are not explicitly enumerated in the Constitution, and secondly that the American federal government is supreme over the states, and so states' ability to interfere with the federal government is limited.[3][4]

McCulloch has been described as "the most important Supreme Court decision in American history defining the scope of Congress's powers and delineating the relationship between the federal government and the states."[5] The case established two important principles in constitutional law. First, the Constitution grants to Congress implied powers to implement the Constitution's express powers to create a functional national government. Prior to the Supreme Court's decision in McCulloch, the scope of the U.S. government's authority was unclear.[3] Second, state action may not impede valid constitutional exercises of power by the federal government.

A handwritten bank draft from the Second Bank of the United States, dated July 24, 1824, from Daniel Webster, who argued on behalf of McCulloch and the U.S. government in McCulloch v. Maryland.

The establishment of a national bank for the United States was a source of great public controversy from the moment of the U.S. Constitution's ratification in 1788.[6] Soon after George Washington's inauguration as the first President of the United States in 1789, his Secretary of the Treasury, Alexander Hamilton, proposed creating a national bank to regulate American currency and deal with national economic problems.[6] However, Washington's Secretary of State, Thomas Jefferson, strongly opposed the bank's creation, fearing that it would usurp the power of the various states and concentrate it to a dangerous degree in the central federal government.[6] Congress created the First Bank of the United States in 1791 with a 20-year charter, but the issue continued to provoke controversy. Those who supported Hamilton's vision of a stronger central government eventually formed the Federalist Party, while those who opposed him and supported Jefferson's vision of a decentralized government that focused on states' rights formed the Democratic-Republican Party.

The First Bank's charter expired in 1811 and was not renewed. However, national economic problems in the aftermath of the War of 1812 prompted Congress to pass similar legislation in 1816 to create the Second Bank of the United States.[7] The U.S. government only owned 20 percent of the bank's equity, and many state governments resented the bank for calling in loans it had made to them.[8] Consequently, some states passed laws designed to hinder the bank's operation, while others simply tried to tax it.[8] In 1818, the Maryland General Assembly—Maryland's state legislature—passed a law levying a $15,000 annual tax on any bank operating in Maryland that was not chartered by the state of Maryland; the only bank fitting that description was the Second Bank of the United States.

James William McCulloch, the head of the Baltimore Branch of the Second Bank of the United States, refused to pay the tax. The Bank was represented by Daniel Webster. The lawsuit was filed by John James, an informer who sought to collect half of the fine, as provided for by the statute. The case was appealed to the Maryland Court of Appeals, where the state of Maryland argued that "the Constitution is silent on the subject of banks." It was Maryland's contention that without specific constitutional authorization for the federal government to create a bank, any such creation would be rendered unconstitutional.

The court upheld Maryland. The case was then appealed to the Supreme Court. 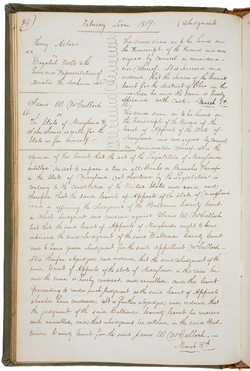 The text of the McCulloch v. Maryland decision, as recorded in the minutes of the Supreme Court.

The Court determined that Congress had the power to create the Bank. Chief Justice Marshall supported his conclusion with four main arguments:[9]

Firstly, he argued that historical practice established Congress's power to create the bank. Marshall invoked the first Bank of the United States history as authority for the constitutionality of the second bank.[9] The first Congress had enacted the bank after great debate, and it was approved by an executive "with as much persevering talent as any measure has ever experienced, and being supported by arguments which convinced minds as pure and as intelligent as this country can boast."[10]

Thirdly, Marshall addressed the scope of congressional powers under Article I. The Court broadly described Congress's authority before it addressed the Necessary and Proper Clause.[9] Marshall admitted that the Constitution does not enumerate a power to create a central Bank but said that is not dispositive as to Congress's power to establish such an institution:[9] "In considering this question, then, we must never forget, that it is a constitution we are expounding."[12]

Fourthly, Marshall supported his opinion textually by invoking the Necessary and Proper Clause, which permits Congress to seek an objective while it exercised its enumerated powers as long as that objective is not forbidden by the Constitution. In liberally interpreting the Necessary and Proper Clause, the Court rejected Maryland's narrow interpretation of the clause that the word "necessary" in the clause meant that Congress could pass only laws that were absolutely essential in the execution of its enumerated powers. The Court rejected that argument, on the grounds that many of the enumerated powers of Congress under the Constitution would be useless if only laws deemed essential to a power's execution could be passed. Marshall also noted that the Necessary and Proper Clause is listed within the powers of Congress, not its limitations.

That principle had been established many years earlier by Alexander Hamilton:[13]

[A] criterion of what is constitutional, and of what is not so ... is the end, to which the measure relates as a mean. If the end be clearly comprehended within any of the specified powers, and if the measure have an obvious relation to that end, and is not forbidden by any particular provision of the Constitution, it may safely be deemed to come within the compass of the national authority. There is also this further criterion which may materially assist the decision: Does the proposed measure abridge a pre-existing right of any State, or of any individual? If it does not, there is a strong presumption in favour of its constitutionality. ...

Chief Marshall also determined that Maryland could not tax the bank without violating the constitution since, as Marshall commented, "the power to tax involves the power to destroy". The Court thus struck down the tax as an unconstitutional attempt by a state to interfere with a federal institution, in violation of the Supremacy Clause.[14]

The opinion stated that Congress has implied powers, which must be related to the text of the Constitution but do not need to be enumerated within the text.

The case was a seminal moment in federalism: the formation of a balance between federal powers and state powers. Marshall also explained in the case that the Necessary and Proper Clause does not require all federal laws to be necessary and proper and that federal laws that are enacted directly pursuant to one of the expressed, enumerated powers granted by the Constitution does not need to comply with the Necessary and Proper Clause, which "purport[s] to enlarge, not to diminish the powers vested in the government. It purports to be an additional power, not a restriction on those already granted."

Though Marshall rejected the Tenth Amendment's provision of states' rights arguing that it did not include the word "expressly," unlike the Articles of Confederation, which the Constitution replaced,[15] controversy over the authority of the amendment being violated by the decision has existed. Compact theory also argues that the federal government is a creation of the states and that the states maintain superiority. Unlike Marshall, his successor, Roger B. Taney, established dual federalism by which separate-but-equal branches of government are believed to be a better option.[16]

McCulloch v. Maryland was cited in the first substantial constitutional case presented before the High Court of Australia in D'Emden v Pedder (1904), which dealt with similar issues in the Australian Federation. While recognizing American law as not binding on them, the Australian Court nevertheless determined that the McCulloch decision provided the best guideline for the relationship between the Commonwealth federal government, and the Australian States, owing in large part to strong similarities between the American and Australian constitutions.

Retrieved from "https://en.wikipedia.org/w/index.php?title=McCulloch_v._Maryland&oldid=941474380"
Categories:
Hidden categories:
The article is a derivative under the Creative Commons Attribution-ShareAlike License. A link to the original article can be found here and attribution parties here. By using this site, you agree to the Terms of Use. Gpedia Ⓡ is a registered trademark of the Cyberajah Pty Ltd.