Middle Eastern Americans are Americans with ancestry, origins, or citizenship from the Middle East.

According to the U.S. Census Bureau, the term "Middle Eastern American" applies to anyone of Western Asian and North African extraction. This definition includes both indigenous Middle Eastern groups in diaspora (e.g. the Jewish diaspora, Kurdish Americans, Assyrian Americans, etc.) and current immigrants from modern-day countries of the Arab League, Azerbaijan, Cyprus, Iran, Israel and Turkey.[1][2][3][4] Middle Eastern communities have been settling in America since at least the Dutch colonial period of New Amsterdam, when Sephardic Jews fleeing persecution in Brazil found refuge there in 1654.

As of 2013, an estimated 1.02 million immigrants from the Middle East and North Africa (MENA) lived in the United States, making up 2.5 percent of the country's 41.3 million immigrants.[9] Middle Eastern and North African immigrants have primarily settled in California (20%), Michigan (11%), and New York (10%). U.S. Census Bureau data shows that from 2009 to 2013, the four counties with the most MENA immigrants were Los Angeles County, California; Wayne County, Michigan (Detroit), Cook County, Illinois (Chicago), and Kings County, New York (Brooklyn); these four counties collectively "accounted for about 19 percent of the total MENA immigrant population in the United States."[10]

Although the U.S. Census has recorded race and ethnicity since the first census in 1790, this information has been voluntary since the end of the Civil War (non-whites were counted differently from 1787 to 1868 for the purpose of determining congressional representation).[11] As such, these statistics do not include those who did not volunteer this optional information, and so the census underestimates the total populations of each ethnicity actually present. [12] 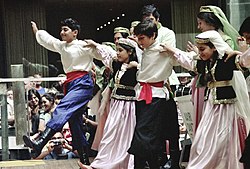 Although tabulated, "religious responses" were reported as a single total and not differentiated, despite totaling 1,089,597 in 2000.[13]

Independent organizations provide improved estimates of the total populations of races and ethnicities in the US using the raw data from the US Census and other surveys.

The most famous ones include

Retrieved from "https://en.wikipedia.org/w/index.php?title=Middle_Eastern_Americans&oldid=941708026"
Categories:
Hidden categories:
The article is a derivative under the Creative Commons Attribution-ShareAlike License. A link to the original article can be found here and attribution parties here. By using this site, you agree to the Terms of Use. Gpedia Ⓡ is a registered trademark of the Cyberajah Pty Ltd.