The Military Auxiliary Radio System (MARS) is a United States Department of Defense sponsored program, established as a separately managed and operated program by the United States Army, and the United States Air Force. The United States Navy-Marine Corps program closed in 2015. The program is a civilian auxiliary consisting primarily of licensed amateur radio operators who are interested in assisting the military with communications on a regional and national level when access to traditional forms of communication may no longer be available. The MARS programs also include active duty, reserve, and National Guard units; and Navy, Marine Corps units.[1]

MARS has a long history of providing worldwide auxiliary emergency communications during times of need. The combined two-service MARS programs (Army, and Air Force), volunteer force of over 3,000 dedicated and skilled amateur radio operators provide the backbone of the MARS program. The main benefit of MARS membership is enjoying the amateur radio hobby through an ever-expanding horizon of MARS service to the nation. MARS members work by the slogans "Proudly Serving Those Who Serve" and "Proud, Professional, and Ready."

The organization that led to the Military Auxiliary Radio System was called the Auxiliary Amateur Radio System (AARS). AARS was created in November 1925 by a few dedicated pioneers in the United States Army Signal Corps led by Captain Thomas C. Rives. The United States recognized radio as a critical mode of communication during World War I. The integration of radio to support Army operations generated a significant manpower and skill requirement that was not easily met. The Army Amateur Radio System was formed in 1925 to provide a pool of trained radio operators to augment the Signal Corps during mobilization in time of war and provide an extension of the Signal Corps' radio network to support civil authority with natural disaster relief efforts. While supporting military goals, the organization was composed of volunteer civilians who were accomplished radio amateurs. These civilians applied their specialty skills in radio communication while supporting the Signal Corps across the continental United States, the Philippines, Panama, and Hawaii.[2]

The organization ultimately experienced both success and failure. The Army Amateur Radio System succeeded in developing the proficiency of its radio operators as demonstrated by the support provided to local, state, and federal authorities during natural disaster relief efforts. However, on the eve of the United States' entry into World War II, the Army Amateur Radio System's membership was significantly underdeveloped in numbers to provide significant manpower to augment the Signal Corps' mobilization for war.[3] The AARS organization continued to operate until the United States entry into World War II on 7 December 1941, at which time radio amateurs were denied the use of the airwaves, and the amateur service and the Army Amateur Radio System were deactivated. Following WWII, the US Army recognized the importance of reactivating the AARS to train vitally needed communications personnel at a relatively low direct cost to the government, and in 1946 the AARS was reactivated. 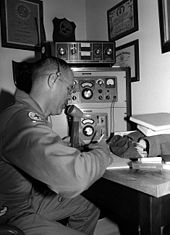 The AARS functioned as such until the creation of the Military Affiliate Radio System in November 1948 with the establishment of separate Army and Air Force MARS programs, reflecting the creation of the Air Force as a separate service. In 1948 Captain Robert L. Gabardy (K4TJ[4], SK) selected the use of the acronym MARS, the Roman god of war, as a fitting name for the post-World War II rebirth of the AARS as the Military Amateur Radio System.[5] The program's name was changed to the Military Affiliate Radio System on 2 September 1952, in recognition of the organization's changing nature with the growing number of civilian volunteer members. Eventually, the Navy-Marine Corps MARS program was established officially on 17 August 1962, and began operations on 1 January 1963. This followed the Cuban Missile Crisis and President Kennedy's concern for viable and extended communications capabilities.

During the Korean War, Vietnam War, Cold War and Gulf War, MARS was most known for its handling of "Marsgram" written messages and providing "phone patches" to allow overseas servicemen to contact their families at home.

The program's name was changed again to the current Military Auxiliary Radio System on 23 December 2009.

Department of Defense Instruction 4650.02, dated 23 December 2009 changed the status of MARS from an affiliate to an auxiliary (equal in status to the Coast Guard Auxiliary and Civil Air Patrol). This change in status saved the Navy-Marine Corps MARS program from being shut down[citation needed] and put it back in line with the Emergency Communications mission of its sister services (Army and Air Force MARS).

Every year, MARS conducts an appropriate military and amateur radio cross-band exercise as an integral part of the annual Armed Forces Day. They provide a reserve of personnel trained in military radio communications, techniques, and procedures as well as to initiate efforts to improve radio-operating techniques. MARS members test state-of-the-art technology through experimentation and testing. 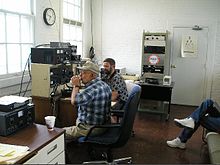 MARS celebrates Armed Forces Day annually with a traditional military to amateur crossband communications test and a message-receiving test. These tests give amateur radio operators and shortwave listeners an opportunity to demonstrate their individual technical skills and receive recognition from the Secretary of Defense or the appropriate military radio station for their proven expertise. A QSL card is provided to those making contact with one of the military stations. Special commemorative certificates are awarded to anyone who receives and accurately copies the digital Armed Forces Day message from the Secretary of Defense. 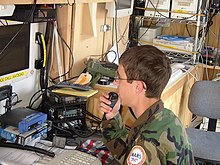 MARS Operator, AAT3OT, using a radio to communicate with the U.S. Army Reserve in the MARS Emergency Communications Unit trailer.

On a day-to-day basis MARS members are available to handle messages to and from service men and women: active duty, reserve, guard, or retired and certain employees of the federal government who are stationed outside the US.

Morale and welfare messages are no longer the largest activity in MARS due to the increased use of the Internet and e-mail by deployed military personnel. MARS had an increased role in providing interoperability communications between Army National Guard and Air National Guard forces and civilian state agencies. However, this service providing interoperability communications was terminated as of May 2015 based on a decision by USAF and ARMY MARS. MARS also provides testing of Military Standard communication modes for use by MARS members.

MARS participates in exercises such as Grecian Firebolt to help support military communications. MARS members from all around the world played a role in Grecian Firebolt 2005 by sending exercise Essential Elements of Information (EEI) reports through the MARS radio network. The EEI's consisted of scenario disaster information. When the EEI's were received, they were sorted and sent to Army Military Intelligence centers. MARS played a large part in reporting up-to-date information on disasters and requesting military assistance using a dispersed and redundant radio network.

MARS also supports government agencies such as the Federal Emergency Management Agency, and participates in programs such as the Department of Homeland Security Office of Emergency Communications SHAred RESources (SHARES).

Members of the then Military Affiliate Radio System (MARS) prep an antenna on 10 May 2007 as they respond to a simulated nuclear incident during Operation Vigilant Guard, a joint military and civilian training exercise under way at Camp Atterbury, near Edinburgh, Indiana

Effective 30 September 2015, Navy MARS will no longer operate. The US Navy, after completing a study, found that NAVY MARS provided no useful purpose to their missions.[8] [9]

Retrieved from "https://en.wikipedia.org/w/index.php?title=Military_Auxiliary_Radio_System&oldid=962881782"
Categories:
Hidden categories:
The article is a derivative under the Creative Commons Attribution-ShareAlike License. A link to the original article can be found here and attribution parties here. By using this site, you agree to the Terms of Use. Gpedia Ⓡ is a registered trademark of the Cyberajah Pty Ltd.