Military districts (also called military regions) are formations of a state's armed forces (often of the Army) which are responsible for a certain area of territory. They are often more responsible for administrative than operational matters, and in countries with conscript forces, often handle parts of the conscription cycle.

Navies have also used a similar model, with organizations such as the United States Naval Districts. A number of navies in South America used naval districts at various points in time. 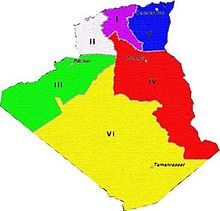 Algeria is divided into six numbered military regions, each with headquarters located in a principal city or town (see People's National Army (Algeria)#Military regions). This system of territorial organization, adopted shortly after independence, grew out of the wartime wilaya structure and the postwar necessity of subduing antigovernment insurgencies that were based in the various regions. Regional commanders control and administer bases, logistics, and housing, as well as conscript training. Commanders of army divisions and brigades, air force installations, and naval forces report directly to the Ministry of National Defence and service chiefs of staff on operational matters. Previously Algeria had formed France's tenth military region.

There were 76 northern military districts or military regions (軍區), or war areas, which were the largest formations of the National Revolutionary Army, under the Military Affairs Commission, chaired by Chiang Kai-shek during the Second Sino-Japanese War and World War II. During the Second Sino-Japanese War the National Revolutionary Army eventually organized itself into twelve Military Regions.

The military regions (originally eleven, then seven) of the People's Liberation Army were divided into military districts (usually contiguous with provinces) and military sub-districts, under the command of the Central Military Commission.

In February 2016, the 7 military regions were changed to 5 theater commands:[3]

Under the Third Republic, a military region comprised several departments which supported an army corps. For many years up to 21 military regions were active.

During World War II, Germany used the system of military districts (German: Wehrkreis) to relieve field commanders of as much administrative work as possible and to provide a regular flow of trained recruits and supplies to the Field Army. The method they adopted was to separate the Field Army (Oberbefehlshaber des Heeres) from the Home Command (Heimatkriegsgebiet) and to entrust the responsibilities of training, conscription, supply and equipment to that command.

The Commander of the Infantry Corps with the identical number also commanded the Wehrkreis in peacetime, but command of the Wehrkreis passed to his second-in command at the outbreak of war.

In peacetime, the Wehrkreis was the home to the Infantry Corps of the same number and all subordinate units of that Corps.

Until 2013 the German Armed Forces (Bundeswehr) had four military districts – Wehrbereichskommando (WBK) as part of the Streitkräftebasis or Joint Service Support Command. Each WBK controlled several Landeskommandos (State Commands) due to the federal structure of Germany who have taken over functions carried out by the Verteidigungsbezirkskommandos (VBKs) or Military Region Commands (Defence District Commands) as. These command authorities are in charge of all military facilities. Now the Landeskommmandos are led by the National Territorial Command called Kommando Territoriale Aufgaben der Bundeswehr (KdoTerrAufgBw).

Kodam districts as of 2007 in Indonesia

Military regional commands functioned as a means of circles of defense, or regional defense, to defend the designated islands/provinces under Indonesian territory. Each MRC commander had full authority to begin operations with assets available in the district. MRC commanders have command and autonomy over its military structures and organizations.

Main article: Armed Forces of the Republic of Kazakhstan

The Kazakh Ground Forces are divided into four regional commands:[4]

In 1921, due to reorganization, the military districts were replaced with Dowództwo Okręgu Korpusu (DOK – Corps District Command). In the Second Polish Republic there were ten DOKs:

Russia and the Soviet Union 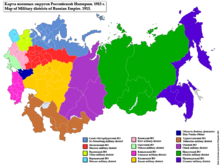 Military districts of the Russian Empire in 1913

The Russian Empire's military district (Russian: вое́нный о́круг, voyenny okrug) was a territorial association of military units, formations, military schools, and various local military establishments. This territorial division type was utilized in Imperial Russia, USSR and is currently in use in Russian Federation.

Such territorial division provided convenient management of army units, their training and other activities regarding the country's readiness to defend itself.

This increased to 17 military districts of the USSR at the beginning of July 1940 shortly before the USSR was invaded by Germany and entered the Second World War, and were used to create combat Fronts after commencement of the German invasion of the USSR.

During the war the districts were further divided into geographic regions for logistic reasons, these being:[citation needed]

After the war, the number was increased to 33 to aid in demobilisation of forces, but by October 1946, they had been reduced to 21.[5]

By the end of the 1980s, immediately before the dissolution of the Soviet Union, there were sixteen military districts, within three to five main strategic Theatre groupings.

A military district (Russian: вое́нный о́круг, voyenny okrug) in the Russian Federation operates under the command of the district headquarters, headed by the district commander, and is subordinated to the General Staff of the Armed Forces of the Russian Federation.[citation needed] (Previously under Commander-in-Chief of the Ground Forces General Nikolai Kormiltsev, the military districts reported to the General Staff via the Russian Ground Forces staff.) It is a territorial association of military units, formations, military schools, and various local military establishments. This territorial division type was historically adopted, originally by Imperial Russia, to provide a more efficient management of army units, their training and other operations activities related to combat readiness.

Military districts of Russia as of 2016

British Army regional districts have evolved slowly over the previous 150 years or so. For many years there were regional commands in the UK, including Aldershot Command (from 1880), Eastern Command, Northern Command, Scottish Command, Southern Command and Western Command (from 1905). By 1985 these were superseded by districts, and until the spring of 1991 there were nine of them. Antony Beevor wrote in his revised edition of Inside the British Army in 1991 that '..the first of the minor districts to be amalgamated were North West District, Western District, and Wales, to form a new Western District.' HQ Northern Ireland remained separate and reported to HQ UK Land Forces only on non-operational matters.[7]

From 1995, UK commands and later districts were replaced by regenerative divisions. 2nd Division, 4th Division, 5th Division and London District acted as regional commands within the UK reporting to Commander Regional Forces. Scotland District was absorbed by 2nd Division in 2000. The divisions were responsible for training subordinate formations and units under their command for operations in the UK, such as Military Aid to the Civil Community, as well as training units for overseas deployments. 2nd, 4th and 5th Divisions were replaced by Support Command on 1 November 2011.[8]

The military department was a military and administrative command of the US Army.

The Army of the Republic of Vietnam originally had four corps, for example I Corps (South Vietnam). Later they were redesignated Military Regions 1-4.

Retrieved from "https://en.wikipedia.org/w/index.php?title=Military_district&oldid=958642069"
Categories:
Hidden categories:
The article is a derivative under the Creative Commons Attribution-ShareAlike License. A link to the original article can be found here and attribution parties here. By using this site, you agree to the Terms of Use. Gpedia Ⓡ is a registered trademark of the Cyberajah Pty Ltd.