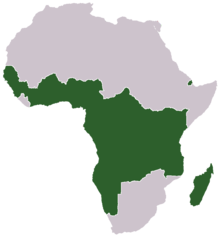 Alternative planning in 1918, including the takeover of French colonies in Western and Central Africa

Mittelafrika (German: [ˈmɪtl̩ˌʔaːfʁika], "Middle Africa") is the name created for a geostrategic region in central and east Africa. Much like Mitteleuropa, it articulated Germany's foreign policy aim, prior to World War I, of bringing the region under German domination. The difference being that Mittelafrika would presumably be an agglomeration of German colonies in Africa, while Mitteleuropa was conceptualised as a geostrategic buffer zone between Germany and Russia to be filled with puppet states.

German strategic thinking was that if the region between the colonies of German East Africa (Rwanda, Burundi, and Tanganyika (Tanzania minus the island of Zanzibar)), German South-West Africa (Namibia minus Walvis Bay), and Cameroon could be annexed, a contiguous entity could be created covering the breadth of the African continent from the Atlantic to the Indian Ocean. Given the richness in natural resources of the Congo Basin alone, this region would accrue considerable wealth to the colonising power through the exploitation of natural resources, as well as contributing to another German aim of economic self-sufficiency.

The concept dates back to the 1890s, when then Chancellor of Germany, Leo von Caprivi, gained the Caprivi Strip in the Heligoland–Zanzibar Treaty. This addition to German South-West Africa attached the colony to the Zambezi River. British and German imperialists competed over the region which now comprises Zimbabwe, Zambia, and Malawi. Cecil Rhodes, on behalf of the British, successfully colonised the latter region (named Rhodesia, after Rhodes). Germany also discussed with Britain for them to press their ally, Portugal, to cede the colonies of Angola and Mozambique to them. The British however, had preferential trade agreements with Portugal, who was a trusted ally, and though plans for an eventual partition of the Portuguese colonies were drawn, Britain would thus see its colonial position in Africa severely weakened in case they were applied, since the Germans could then effectively threaten their Cairo to Cape lines of communication. These plans were arguably made only to be used only as a last resort to appease Germany in case she threatened to disrupt the balance of power in Europe. However, since German foreign policy interests were in subsequent years mainly directed at gaining mastery in Europe itself, and not in Africa, they were eventually shelved. Indeed, as it is likely that German concepts of a "Mittelafrika" were designed to put pressure on Britain to tolerate growing German dominance in the European continent, and not the other way around, colonial concessions would never placate the German Empire, as surely British politicians came to realise at the time.

Germany's aspirations in Mittelafrika were incorporated into Germany's aims in World War I insofar as Germany expected to be able to gain the Belgian Congo if it were to defeat Belgium in Europe. The full realisation of Mittelafrika depended on a German victory in World War I in the European theatre, where Britain would be forced to negotiate and cede its colonies in Rhodesia to Germany when faced with a German-dominated Europe across the English Channel. In the course of the actual war, German aspirations in Mittelafrika were never matched by events in the African theatre. The German colonies were at very different levels of defence and troop strength when the war began in Europe, and were not in a position to fight a war due to a lack of materiel.

Retrieved from "https://en.wikipedia.org/w/index.php?title=Mittelafrika&oldid=931819209"
Categories:
Hidden categories:
The article is a derivative under the Creative Commons Attribution-ShareAlike License. A link to the original article can be found here and attribution parties here. By using this site, you agree to the Terms of Use. Gpedia Ⓡ is a registered trademark of the Cyberajah Pty Ltd.