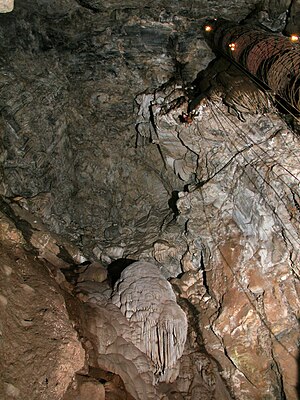 Moaning Cave from the bottom of the shaft

Moaning Caverns is a solutional cave located in the Calaveras County, California, near Vallecito, California in the heart of the state's Gold Country. It is developed in marble of the Calaveras Formation. It was discovered in modern times by gold miners in 1851, but it has long been known as an interesting geological feature by prehistoric peoples. It gets its name from the moaning sound that echoed out of the cave luring people to the entrance, however expansion of the opening to allow access for the public disrupted the sounds. The portion of the cave developed for tourists consists of a spacious vertical shaft 165 feet tall, which is descended by a combination of stairs and a unique 100-foot-high (30 m) spiral staircase built in the early 1900s. It is open to the public for walking tours and spelunking. Including the off-trail areas, the cave reaches a depth of 410 feet (124 m).

Moaning Caverns is also an archaeological site, where some of the oldest human remains known in America were discovered. According to archaeologist Phil C. Orr, these human deposits were about 12,000 years old, for they were under 420 mm. of speleothem mineral deposits.[1] Nevertheless, there are also many other human bones in these caves, some of them from the more recent periods.

There was a lot of controversy about these and other remains in the caves. For example, the Calaveras Skull, found in the same area was deemed to be a hoax.

The cave has long been the resting spot for the bodies of prehistoric people who fell into its opening.

Moaning Caverns is home to the largest single cave chamber in California. The massive room reaches over 180 feet before funneling into smaller passageways. With a 20–30 foot thick ceiling, the open area inside the chamber is, in fact, tall enough to hold the Statue of Liberty (pedestal excluded). There is only one natural entrance into the chamber in the form of a 30-foot vertical chimney dropping into the center of the room. This does make commercial entry a little difficult so dynamite was used in the mid 1800s to expand a natural crack in the ground wide enough for stairs to be built down. The narrow wooden staircase ends at a flat platform 65 feet underground. From there, a ten-story spiral staircase leads down to a second platform at the base of the chamber.

Tourism in the cavern

The large chamber of Moaning Caverns draws large numbers of guests every year to see the beauty of the cave. As of today, there are two ways to enter the main chamber. The most typical mean of entry is the Spiral Tour. The Spiral Tour takes the stairs all the way to the floor of the chamber, 165 feet below the visitors center, on a 45-minute informative trip. There is also a more adventurous way into the cave. The natural entrance was converted into a rappelling route in the mid 80's. Now guests are welcome to rappel down a vertical cavern sixteen and half stories to the floor of the chamber. This adventure does seem like a manageable task but it is not for the faint of heart. After the first 30 feet down the chimney, you pop into the ceiling of the cavern nearly 15 stories above the floor.

After seeing the impressive size of the main cavern chamber, if there is some desire remaining to go further underground, there is the option of the Expedition Tour. The main chamber only extends the first one-third of the cave's total depth. Beyond that, the cave continues down more narrow passageways to a total depth of 410 feet. The Expedition Tour takes some of the adventurous visitors down through a portion of the passageways below. While nobody travels down to the very bottom anymore, the Expedition Tour is still enough to keep people crawling underground on their hands and knees for a period of several hours. The crawling tour takes you roughly 70 feet below the floor of the main chamber through several narrow passageways named the Meat Grinder, Pancake Squeeze, Birth Canal, and finally climb up and out of Santa's Worst Nightmare (a 30 ft chimney).

Retrieved from "https://en.wikipedia.org/w/index.php?title=Moaning_Cavern&oldid=935944564"
Categories:
Hidden categories:
The article is a derivative under the Creative Commons Attribution-ShareAlike License. A link to the original article can be found here and attribution parties here. By using this site, you agree to the Terms of Use. Gpedia Ⓡ is a registered trademark of the Cyberajah Pty Ltd.