Jump to navigation Jump to search
This article is about the North Carolina mountain. For other uses, see Mount Mitchell (disambiguation).

The peak is the highest mountain in the United States east of the Mississippi River,[3][4] and the highest in all of eastern North America south of the Arctic Cordillera. The nearest higher peaks are in the Black Hills of South Dakota and the highland foothills of Colorado. The mountain's topographic isolation is calculated from the nearest discernible single higher point: Lone Butte, which is 1,189 miles (1,913 km) away in southeastern Colorado.[5]

The mountain, previously known as Black Dome for its rounded shape, was named after Elisha Mitchell, a professor at the University of North Carolina, who first explored the Black Mountain region in 1835, and determined that the height of the range exceeded by several hundred feet that of Mount Washington in New Hampshire, commonly thought at the time to be the highest point east of the Rocky Mountains. Mitchell fell to his death at nearby Mitchell Falls in 1857, having returned to verify his earlier measurements.

A 4.6-mile (7.4 km) road (NC 128) connects the scenic Blue Ridge Parkway to a parking lot where a steep paved 980-foot (300 m) trail leads through a conifer forest to the summit. The 40-foot (12 m) stone observation tower on the summit was torn down in late 2006. A new observation deck was constructed and opened to visitors in January 2009.[6] Also on the summit is the tomb of Elisha Mitchell.

Mount Mitchell was formed during the Precambrian when marine deposits were metamorphosed into gneiss and schist. These metasedimentary rocks were later uplifted during the Alleghenian orogeny.[7] The soils are well drained, dark brown and stony with fine-earth material ranging in texture from sandy clay loam to loam or sandy loam; Burton and Craggey are the most common series around the summit.[8]

The mountain's summit is coated in a dense stand of Southern Appalachian spruce-fir forest, which consists primarily of two evergreen species— the red spruce and the Fraser fir. Most of the mature Fraser firs, however, were killed off by the non-native Balsam woolly adelgid in the latter half of the 20th century. The high elevations also expose plant life to high levels of pollution, including acid precipitation in the form of rain, snow, and fog. These acids damage the red spruce trees in part by releasing natural metals from the soil like aluminum, and by leaching important minerals. To what extent this pollution harms the high-altitude ecosystem is debatable.[10]

While the mountain is still mostly lush and green in the summer, many dead Fraser fir trunks can be seen due to these serious problems. Reducing air pollution is a difficult issue, as the pollutants are often carried in from long distances. Sources can be local or hundreds of miles or kilometers away, requiring cooperation from as far away as the Midwest.

Wildflowers are abundant all summer long. Young fir and spruce trees do well in the subalpine climate, and their cones feed the birds along with wild blueberry and blackberry shrubs.

The second highest point in eastern North America, Mount Craig at 6,647 feet (2,026 m), is roughly a mile to the north of Mount Mitchell. 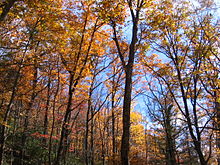 The summit area of Mount Mitchell is marked by a warm-summer humid continental climate (Köppen Dfb) bordering extremely close to a subalpine climate (köppen climate classification Dfc), with mild summers and long, moderately cold winters, being more similar to southeastern Canada than the southeastern U.S. The monthly daily average temperature ranges from 25.2 °F (−3.8 °C) in January to 59.1 °F (15.1 °C) in July. The coldest temperature ever recorded in the state occurred there on January 21, 1985 when it fell to −34 °F (−37 °C), during a severe cold spell that brought freezing temperatures as far south as Miami. It is also the coldest average reporting station in the state at 43.8 °F (6.6 °C) (based on data collected from 1971 to 2000) which is well below any other station.[11] Unlike the lower elevations in the surrounding regions, heavy snows often fall from December to March, with 50 inches (127 cm) accumulating in the Great Blizzard of 1993 and 33 inches (84 cm) in the January 2016 blizzard.[12][11] Snow flurries have been reported on the summit even in the summer months of June, July, and August. Due to the high elevation, precipitation is heavy and reliable year-round, averaging 74.7 inches (1,900 mm) for the year, with no month receiving less than 5 in (127 mm) of average precipitation. The summit is often windy, with recorded gusts of up to 178 mph (286 km/h).[13]

Mount Mitchell had 139.94 inches of rain in 2018, a state record, which is also the highest yearly total rainfall recorded anywhere east of the Cascades in mainland US.[14]

360-degree panorama from the summit of Mount Mitchell

Mount Mitchellat Wikipedia's sister projects
Retrieved from "https://en.wikipedia.org/w/index.php?title=Mount_Mitchell&oldid=967985391"
Categories:
Hidden categories:
The article is a derivative under the Creative Commons Attribution-ShareAlike License. A link to the original article can be found here and attribution parties here. By using this site, you agree to the Terms of Use. Gpedia Ⓡ is a registered trademark of the Cyberajah Pty Ltd.