Jump to navigation Jump to search
For Other similar administrative division, see township.

A mukim is a type of administrative division used in Brunei, Indonesia, Malaysia and Singapore. The word mukim is loanword in English.[1] However, it was also originally a loanword in Malay from the Arabic word: مقيم (means resident). The closest English translation for mukim is township.[2][3]

In Brunei, a mukim is the immediate subdivision of a district (Malay: daerah). The equivalent English word for 'mukim' is 'township'. 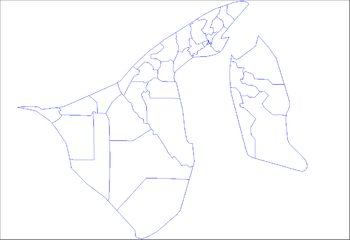 There are 38 mukims in Brunei. Each mukim is an administrative area made up of several kampung (Malay for "village"). A mukim is headed by a penghulu, which is an elected office. The number of mukims in each of the districts in Brunei is as follows:

In Indonesia, mukim means 'a place to stay' or 'the one who stay', Permukiman generally use to refer 'a settlement'.[4] The term mukim used exclusively as a subdivision of a district in Aceh. A mukim contains some villages.

In Malaysia, a mukim can either be a subdivision of a daerah (district or county) or a subdivision of an autonomous sub-district (daerah kecil), as per Section 11(c) of the National Land Code 1965. The mukim designation was not used in Putrajaya however; the term precinct (presint in Malay) is used instead. The northern state of Perlis, due to its size, was not divided into daerahs, but straight to the mukim level. In Kelantan, the term daerah corresponds to the mukim level in other states.

Maps of mukims of states in Malaysia

Retrieved from "https://en.wikipedia.org/w/index.php?title=Mukim&oldid=938059402"
Categories:
Hidden categories:
The article is a derivative under the Creative Commons Attribution-ShareAlike License. A link to the original article can be found here and attribution parties here. By using this site, you agree to the Terms of Use. Gpedia Ⓡ is a registered trademark of the Cyberajah Pty Ltd.