Jump to navigation Jump to search
Supermarket in Atlanta, Georgia 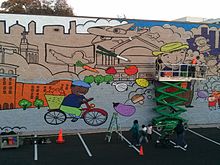 A mural on the side of the store as pictured from the Atlanta Beltline in November 2014.

Murder Kroger is the name by which the Kroger supermarket at 725 Ponce de Leon Avenue in Poncey-Highland, Atlanta[1] has been known for decades, a name which remains common as of 2020.[2][3][4] Despite ongoing development in the area, it has been described as a nickname "that just won't die".[2][5]

Kroger reopened a new store on October 16, 2019 at the same location, as part of the 725 Ponce development. Despite hopes from Kroger officials that the nickname "Murder Kroger" will not be applied to the new store, the name has already been adopted to refer to the new structure as well.[2] A headline from 11 Alive called it a former nickname[2] while a headline from The Atlanta Journal-Constitution asked "'Murder Kroger' no more?".[6] Decaturish, meanwhile, stated that "locals have a name for [the store] that just won't die".[5] Attempts to re-brand the location as "Beltline Kroger" proved unsuccessful, with the nickname instead being ascribed to another Kroger located several miles away, also on the Beltline.

The store opened in the 1980s. The store's parking lot has been the scene of two fatal shootings and the discovery of a corpse. In 1991, a 25-year-old woman named Cynthia Prioleau was shot and killed. In 2002, the malodorous corpse of a man was found inside a car. In 2015, an Alabama man, Joshua R. Richey, was shot and killed. The 2015 murder occurred after the store had been renovated and promoted by the company as "Beltline Kroger". On January 15, 2016, Kroger announced that the location would be demolished to make way for 725 Ponce, a mixed-use development incorporating office space, a new Kroger store, and expanded parking.[7] The original Kroger building was demolished shortly after it was closed in October 2016.[2]

The store opened shortly after 1986, when low-interest government loans were used to convert the adjacent and former Ford Motor Company Assembly Plant into lofts and commercial spaces.[8] From the 1990s,[9] and until at least 2002,[10] the store had drivers license renewal services. In 2002 the store tested scan-it-yourself checkout devices.[11] After two Publix supermarkets opened nearby, the store was refurbished around 2002.[12] The closest neighboring Kroger, near Little Five Points, was the area's top performing one, as of 2006[update].[13] 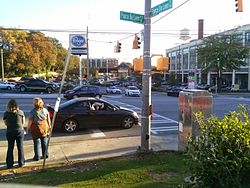 Murder Kroger as seen from across Ponce de Leon Ave., with the Ford Factory lofts on the right

In October 1999, a man robbed the Bank of America inside the store.[14] A song titled "Murder Kroger" by the group Attractive Eighties Women, which incorporates a mention of the nearby Clermont Lounge into the lyrics, is dedicated to shoppers who frequent the store.[15] Renovations were scheduled for completion in November 2014 at the market, including a bike/pedestrian ramp to the Atlanta BeltLine's Eastside Trail, a bike repair station, new curbs and sidewalks (including paved sidewalk access to Ponce de Leon Avenue), new trees and landscaping, a "water quality pond" in the parking lot to filter runoff, new LED parking lot lighting and repaving the front and back parking lots.[16][17][16][18][19]

Retrieved from "https://en.wikipedia.org/w/index.php?title=Murder_Kroger&oldid=971937917"
Categories:
Hidden categories:
The article is a derivative under the Creative Commons Attribution-ShareAlike License. A link to the original article can be found here and attribution parties here. By using this site, you agree to the Terms of Use. Gpedia Ⓡ is a registered trademark of the Cyberajah Pty Ltd.