Muslims in the United States military

Service by Muslims in the United States military dates back to the American Revolutionary War where records indicate that at least a few Muslims fought on the rebel side.[1]

Muslims have fought in all major US wars including the American Civil War, World War I, World War II, and the Vietnam War.[1] More recently they have served in Gulf War, Iraq War, and the War in Afghanistan.

On December 14, 1993, the Army Chief of Chaplains requested that an insignia be created to represent Muslim chaplains, and the design (a crescent) was completed January 8, 1994.[2]

In 2011 there were approximately 3,500 American Muslims serving in the United States military.[3] 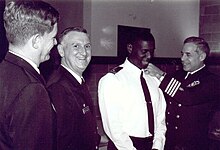 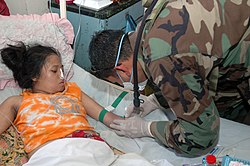 The Hospital corpsman Umar Iqbal draws blood from a patient for medical testing in the Intensive Care Unit.

Muslim American involvement in the US military has become increasingly controversial after events such as the September 11 attacks terrorist attacks, 2009 Fort Hood shooting, and Khizr Khan 2016 Democratic National Convention speech. A 2013 YouGov poll found that 44 percent of American citizens question the loyalty that Muslims have to the United States.[4] Muslims have fought and died in World War II and the Vietnam War. Some Muslim Americans served in World War II in North Africa, Europe, and Asia.[5] At least 12 Muslims are known to have died in the Vietnam War as well.[5]

Records from the American Revolutionary War suggest that at least a few Muslims fought on the American side. Among the recorded names of soldiers are "Yusuf ben Ali" and "Bampett Muhamed".[6]

Peter Salem was a notable African American who participated in the Revolutionary War. He played a particularly important role in the crucial Battle of Bunker Hill, in which he fatally shot British Marine Major John Pitcairn. Although there is no direct documentation of Salem's religious views, some scholars believe that he may have been Muslim.[7]

Two hundred and ninety-two Muslims are known to have fought during the Civil War.[1] The highest ranking Muslim officer during the War was Captain Moses Osman.[1] Nicholas Said, formerly enslaved to an Arab master,[citation needed] came to the United States in 1860 and he found a teaching job in Detroit. In 1863, Said enlisted in the 55th Massachusetts Colored Regiment in the United States Army and rose to the rank of sergeant. He was later granted a transfer to a military hospital, where he gained some knowledge of medicine. His Army records state that he died in Brownsville, Tennessee, in 1882. Another Muslim soldier from the Civil War was Max Hassan, an African who worked for the military as a porter.[8]

Abdullah Igram, a Muslim-American WWII veteran, campaigned for Islam to be an option in servicemembers' religious identification. His organization provided additional tags which soldiers were allowed to wear in 1953, and by then dog tags included codes for 'other' and 'prefer not to say'. By the Vietnam War, personnel could use a wide list of spelled out religion names. [9]

Those people who resembled Muslims experienced an increase in verbal and physical attacks in the days following 9/11, despite efforts made by the White House.[5] South Asians and Arabs were targeted under discriminatory acts and hate crimes even though they may or may not have followed the Islamic belief. Islamophobia, or "the fear of Muslims", still persists today as organizations like Park51, a Manhattan mosque, are targeted for associating with the Islamic faith. After 9/11, 6,024 served in the military in the Iraq and Afghanistan wars, with at least 14 being killed overseas.[10] As of December 2015, only 5,896 of the 1.3 million active members of the US military self-identify as Muslim,[6] or roughly 0.45%. Rather than extremism, Islam itself is seen as the source of terrorist attacks after 15 years of war in the Arab states.[11] Practicing Muslims experience lack of culture representation, in which they have to shave their beards and routinely eat meals made with pork, a food source banned by Islamic customs.[11] Despite these setbacks, Muslim soldiers generally experience encouragement and camaraderie from their peers in which several have expressed openly their level of comfort while serving the military.[11]

Notable Muslims in the Military

Humayun Khan was a Pakistani-American born in the United Arab Emirates on September 9, 1976, to Pakistani parents.[10] After graduating from the University of Virginia in 2000, he joined the U.S. Army's 201st Forward Support Battalion, 1st Infantry Division. Throughout his four years of service, he rose in ranks to become an officer in the U.S. army before being killed by a car bomb June 8, 2004, saving the lives of his fellow soldiers.[12] Republican presidential candidate Donald Trump’s temporary immigration ban based on a list of terror linked countries (created under the Obama administration) brought Khan's parents, Khizr and Ghazala Khan, into the public spotlight as they addressed Trump at the Democratic National Convention in 2016. Speaking out to defend their son, and others who died in the American military, created an "unexpected and potentially pivotal flash point in the general election" [8]

Colonel Douglas Burpee is a retired U.S. Marine, having flown helicopters for 27 years. Burpee was born Episcopalian but converted to Islam when he was 19 in the late 1970s while attending the University of Southern California.[13] He was accepted into the Officers Candidates' School in Quantico, VA, after graduation. At the end of his service, Burpee was the highest ranking Muslim in the U.S. Marine Corps.[13]

Retrieved from "https://en.wikipedia.org/w/index.php?title=Muslims_in_the_United_States_military&oldid=932671959"
Categories:
Hidden categories:
The article is a derivative under the Creative Commons Attribution-ShareAlike License. A link to the original article can be found here and attribution parties here. By using this site, you agree to the Terms of Use. Gpedia Ⓡ is a registered trademark of the Cyberajah Pty Ltd.