NGA headquarters, also known as NGA Campus East, is located at Fort Belvoir North Area in Virginia. The agency also operates major facilities in the St. Louis, Missouri area, as well as support and liaison offices worldwide. The NGA headquarters, at 2.3 million square feet (214,000 m2), is the third-largest government building in the Washington metropolitan area after The Pentagon and the Ronald Reagan Building.[9]

In addition to using GEOINT for U.S. military and intelligence efforts, the NGA provides assistance during natural and man-made disasters, and security planning for major events such as the Olympic Games.[10]

In September 2018, researchers at the National Geospatial-Intelligence Agency released a high resolution terrain map[11] (detail down to the size of a car, and less in some areas) of Antarctica, named the "Reference Elevation Model of Antarctica" (REMA).[12]

U.S. mapping and charting efforts remained relatively unchanged until World War I, when aerial photography became a major contributor to battlefield intelligence. Using stereo viewers, photo-interpreters reviewed thousands of images. Many of these were of the same target at different angles and times, giving rise to what became modern imagery analysis and mapmaking.

The Engineer Reproduction Plant was the Army Corps of Engineers's first attempt to centralize mapping production, printing, and distribution.[when?] It was located on the grounds of the Army War College in Washington, D.C. Previously, topographic mapping had largely been a function of individual field engineer units using field surveying techniques or copying existing or captured products. In addition, ERP assumed the "supervision and maintenance" of the War Department Map Collection, effective April 1, 1939.

With the advent of the Second World War aviation, field surveys began giving way to photogrammetry, photo interpretation, and geodesy. During wartime, it became increasingly possible to compile maps with minimal field work. Out of this emerged AMS, which absorbed the existing ERP in May 1942. It was located at the Dalecarlia Site (including buildings now named for John C. Frémont and Charles H. Ruth) on MacArthur Blvd., just outside Washington, D.C., in Montgomery County, Maryland, and adjacent to the Dalecarlia Reservoir. AMS was designated as an Engineer field activity, effective July 1, 1942, by General Order 22, OCE, June 19, 1942. The Army Map Service also combined many of the Army's remaining geographic intelligence organizations and the Engineer Technical Intelligence Division. AMS was redesignated the U.S. Army Topographic Command (USATC) on September 1, 1968, and continued as an independent organization until 1972, when it was merged into the new Defense Mapping Agency (DMA) and redesignated as the DMA Topographic Center (DMATC) (see below).

The agency's credit union, Constellation Federal Credit Union, was chartered during the Army Map Service era, in 1944. It has continued to serve all successive legacy agencies' employees and their families.[13]

After the war, as airplane capacity and range improved, the need for charts grew. The Army Air Corps established its map unit, which was renamed ACP in 1943 and was located in St. Louis, Missouri. ACP was known as the U.S. Air Force Aeronautical Chart and Information Center (ACIC) from 1952 to 1972 (See DMAAC below).

A credit union was chartered for the ACP in 1948, called Aero Chart Credit Union. It was renamed Arsenal Credit Union in 1952,[14] a nod to the St. Louis site's Civil War-era use as an arsenal.[15] 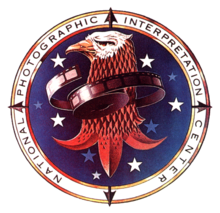 Seal of the NPIC

Shortly before leaving office in January 1961, President Dwight D. Eisenhower authorized the creation of the National Photographic Interpretation Center, a joint project of the CIA and US DoD. NPIC was a component of the CIA's Directorate of Science and Technology (DDS&T) and its primary function was imagery analysis.[16] NPIC became part of the National Imagery and Mapping Agency (now NGA) in 1996.[17]

NPIC first identified the Soviet Union's basing of missiles in Cuba in 1962. By exploiting images from U-2 overflights and film from canisters ejected by orbiting Corona (satellite)s,[18] NPIC analysts developed the information necessary to inform U.S. policymakers and influence operations during the Cuban Missile Crisis. Their analysis garnered worldwide attention when the Kennedy Administration declassified and made public a portion of the images depicting the Soviet missiles on Cuban soil; Adlai Stevenson presented the images to the United Nations Security Council on October 25, 1962.

DMA was first headquartered at the United States Naval Observatory in Washington, D.C, then at Falls Church, Virginia. Its mostly civilian workforce was concentrated at production sites in Bethesda, Maryland, Northern Virginia, and St. Louis, Missouri. DMA was formed from the Mapping, Charting, and Geodesy Division, Defense Intelligence Agency (DIA), and from various mapping-related organizations of the military services.[21]

DMAHC was formed in 1972 when the Navy's Hydrographic Office split its two components: The charting component was attached to DMAHC, and the survey component moved to the Naval Oceanographic Office, Bay St. Louis, Mississippi, on the grounds of what is now the NASA Stennis Space Center. DMAHC was responsible for creating terrestrial maps of coastal areas worldwide and hydrographic charts for DoD. DMAHC was initially located in Suitland, Maryland, but later relocated to Brookmont (Bethesda), Maryland.

DMATC was located in Brookmont (Bethesda), Maryland. It was responsible for creating topographic maps worldwide for DoD. DMATC's location in Bethesda, Maryland is the former site of NGA's headquarters.

DMAAC originated with the U.S. Air Force's Aeronautical Chart and Information Center (ACIC) and was located in St. Louis, Missouri.

NIMA was established on October 1, 1996, by the National Defense Authorization Act for Fiscal Year 1997.[22] The creation of NIMA followed more than a year of study, debate, and planning by the defense, intelligence, and policy-making communities (as well as the Congress) and continuing consultations with customer organizations. The creation of NIMA centralized responsibility for imagery and mapping.

NIMA's creation was clouded by the natural reluctance of cultures to merge and the fear that their respective missions—mapping in support of defense activities versus intelligence production, principally in support of national policymakers—would be subordinated, each to the other.[23] 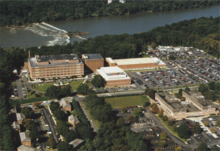 NGA's old headquarters in Brookmont, Maryland prior to 2012. It had been the headquarters of NGA and its predecessor agencies since 1945. After the move to its current headquarters, this facility was renovated and became Intelligence Community Campus-Bethesda.

With the enactment of the National Defense Authorization Act for Fiscal Year 2004 on November 24, 2003,[24] NIMA was renamed NGA to better reflect its primary mission in the area of GEOINT.[25] As a part of the 2005 Base Realignment and Closure (BRAC) process, all major Washington, D.C.-area NGA facilities, including those in Bethesda, Maryland; Reston, Virginia; and Washington, D.C., would be consolidated at a new facility at the Fort Belvoir proving grounds. This new facility, called the NGA Campus East houses several thousand people and is situated on the former Engineer Proving Ground site near Fort Belvoir. NGA facilities in St. Louis were not affected by the 2005 BRAC process.[26]

This table lists all Directors of the NIMA and NGA and their term of office.

On February 22, 2010, Secretary of Defense Robert Gates announced that Letitia Long would become director later that year, becoming the first woman to head one of the 16 Intelligence Community component agencies. Long was at the time deputy director of the DIA.[28] Long was sworn in on August 9, 2010, as head of the NGA.[29]

NIMA / NGA has been involved in several controversies.

Retrieved from "https://en.wikipedia.org/w/index.php?title=National_Geospatial-Intelligence_Agency&oldid=939157879"
Categories:
Hidden categories:
The article is a derivative under the Creative Commons Attribution-ShareAlike License. A link to the original article can be found here and attribution parties here. By using this site, you agree to the Terms of Use. Gpedia Ⓡ is a registered trademark of the Cyberajah Pty Ltd.