The Director of the NRO reports to both the Director of National Intelligence and the Secretary of Defense[7]. The NRO's federal workforce is a hybrid organization consisting of some 3000 personnel including NRO cadre, Air Force, Army, CIA, NGA, NSA, and Navy personnel.[8] A 1996 bipartisan commission report described the NRO as having by far the largest budget of any intelligence agency, and "virtually no federal workforce", accomplishing most of its work through "tens of thousands" of defense contractor personnel.[9] 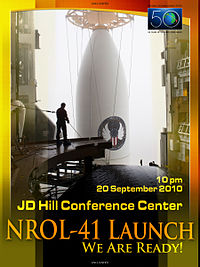 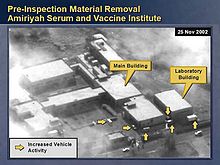 Serum and Vaccine Institute in Al-A'amiriya, Iraq, as imaged by a US reconnaissance satellite in November 2002. 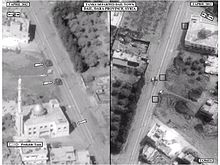 US Satellite imagery of Syrian tanks departing Da'el in Daraa province after several days of assaults against the town in April 2012.
See also: Chronology of the National Reconnaissance Office

The NRO was established on August 25, 1960, after management problems and insufficient progress with the USAF satellite reconnaissance program (see SAMOS and MIDAS).[14]:23[15] The formation was based on a 25 August 1960 recommendation to President Dwight D. Eisenhower during a special National Security Council meeting, and the agency was to coordinate the USAF and CIA's (and later the navy and NSA's) reconnaissance activities.[14]:46

The NRO's first photo reconnaissance satellite program was the Corona program,[16]:25–28 the existence of which was declassified February 24, 1995, and which existed from August 1960 to May 1972 (although the first test flight occurred on February 28, 1959). The Corona system used (sometimes multiple) film capsules dropped by satellites, which were recovered mid-air by military craft. The first successful recovery from space (Discoverer XIII) occurred on August 12, 1960, and the first image from space was seen six days later. The first imaging resolution was 8 meters, which was improved to 2 meters. Individual images covered, on average, an area of about 10 by 120 miles (16 by 193 km). The last Corona mission (the 145th), was launched May 25, 1972, and this mission's last images were taken May 31, 1972. From May 1962 to August 1964, the NRO conducted 12 mapping missions as part of the "Argon" system. Only seven were successful.[16]:25–28 In 1963, the NRO conducted a mapping mission using higher resolution imagery, as part of the "Lanyard" program. The Lanyard program flew one successful mission.[citation needed] NRO missions since 1972 are classified, and portions of many earlier programs remain unavailable to the public.

The first press reports on NRO started in 1971.[17] The first official acknowledgement of NRO was a Senate committee report in October 1973, which inadvertently exposed the existence of the NRO.[18] In 1985, a New York Times article revealed details on the operations of the NRO.[19]

The existence of the NRO was declassified on September 18, 1992, by the Deputy Secretary of Defense, as recommended by the Director of Central Intelligence.[20]

A Washington Post article in September 1995 reported that the NRO had quietly hoarded between $1 billion and $1.7 billion in unspent funds without informing the Central Intelligence Agency, the Pentagon, or Congress. The CIA was in the midst of an inquiry into the NRO's funding because of complaints that the agency had spent $300 million of hoarded funds from its classified budget to build a new headquarters building in Chantilly, Virginia, a year earlier.

In total, NRO had accumulated US$3.8 billion (inflation adjusted US$ 6.4 billion in 2020) in forward funding. As a consequence, NRO's three distinct accounting systems were merged.[21]

The presence of the classified new headquarters was revealed by the Federation of American Scientists who obtained unclassified copies of the blueprints filed with the building permit application. After 9/11 those blueprints were apparently classified. The reports of an NRO slush fund were true. According to former CIA general counsel Jeffrey Smith, who led the investigation: "Our inquiry revealed that the NRO had for years accumulated very substantial amounts as a 'rainy day fund.'"[22]

In 1999 the NRO embarked on a $25 billion[23] project with Boeing entitled Future Imagery Architecture to create a new generation of imaging satellites. In 2002 the project was far behind schedule and would most likely cost $2 billion to $3 billion more than planned, according to NRO records. The government pressed forward with efforts to complete the project, but after two more years, several more review panels and billions more in expenditures, the project was killed in what the Times report calls "perhaps the most spectacular and expensive failure in the 50-year history of American spy satellite projects."[24]

In August 23, 2001, Mr. Bryan Regan, a civilian employee of TRW at NRO, was arrested at Dulles International Airport outside Washington while boarding a flight for Zurich. He was carrying coded information about Iraqi and Chinese missile sites. He also had the addresses of the Chinese and Iraqi Embassies in Switzerland and Austria. He was sentenced to life in prison without parole for offering to sell intelligence secrets to Iraq and China. [25]

In January 2008, the government announced that a reconnaissance satellite operated by the NRO would make an unplanned and uncontrolled re-entry into the Earth's atmosphere in the next several months. Satellite watching hobbyists said that it was likely the USA-193, built by Lockheed Martin Corporation, which failed shortly after achieving orbit in December 2006.[26] On February 14, 2008, the Pentagon announced that rather than allowing the satellite to make an uncontrolled re-entry, it would instead be shot down by a missile fired from a Navy cruiser.[27] The intercept took place on February 21, 2008.[28]

In July 2008, the NRO declassified the existence of its Synthetic Aperture Radar satellites, citing difficulty in discussing the creation of the Space-Based Radar with the United States Air Force and other entities.[29]

In August 2009, FOIA archives were queried for a copy of the NRO video, "Satellite Reconnaissance: Secret Eyes in Space."[30] The 7 minute video chronicles the early days of the NRO and many of its early programs.

It was proposed that the NRO share the imagery of the United States itself with the National Applications Office for domestic law enforcement purposes.[31] The NAO was disestablished in 2009. The NRO is an non-voting associate member in the Civil Applications Committee (CAC). The CAC is an inter-agency committee that coordinates and oversees the Federal- Civil use of classified collections. The CAC was officially chartered in 1975 by the Office of the President to provide Federal- Civil agencies access to National Systems data in support of mission responsibilities. [32]

According to Asia Times Online, one important mission of NRO satellites is the tracking of non-US submarines on patrol or on training missions in the world's oceans and seas.[33]

At the National Space Symposium in April 2010, NRO director General Bruce Carlson, United States Air Force (Retired) announced that until the end of 2011, NRO is embarking on "the most aggressive launch schedule that this organization has undertaken in the last twenty-five years. There are a number of very large and very critical reconnaissance satellites that will go into orbit in the next year to a year and a half."[34]

In 2012, a McClatchy investigation found that the NRO was possibly breaching ethical and legal boundaries by encouraging its polygraph examiners to extract personal and private information from DoD personnel during polygraph tests that were limited to counterintelligence issues.[35] Allegations of abusive polygraph practices were brought forward by former NRO polygraph examiners.[36] In 2014, an inspector general's report concluded that NRO failed to report felony admissions of child sexual abuse to law enforcement authorities. NRO obtained these criminal admissions during polygraph testing but never forwarded the information to police. NRO's failure to act in the public interest by reporting child sexual predators was first made public in 2012 by former NRO polygraph examiners.[37]

On Aug 30, 2019, Donald Trump tweeted an image of “the catastrophic accident during final launch preparations for the Safir SLV Launch at Semnan Launch Site One in Iran”. The image almost certainly came from a satellite known as USA 224, according to Marco Langbroek, a satellite-tracker based in the Netherlands. The satellite was launched by the National Reconnaissance Office in 2011. [38] 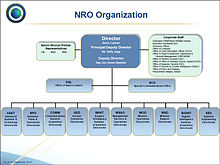 The NRO is part of the Department of Defense. The Director of the NRO is appointed by the President of the United States, by and with the consent of the Senate in accordance with Title 50 of U.S. code.[40] Traditionally, the position was given to either the Under Secretary of the Air Force or the Assistant Secretary of the Air Force for Space, but with the appointment of Donald Kerr as Director of the NRO in July 2005 the position is now independent. The Agency is organized as follows:[41]

Deputy Director of the NRO (DDNRO)

In 2007, the NRO described itself as "a hybrid organization consisting of some 3,000 personnel and jointly staffed by members of the armed services, the Central Intelligence Agency and DOD civilian personnel."[43] Between 2010 and 2012, the workforce is expected to increase by 100.[44] The majority of workers for the NRO are private corporate contractors, with $7 billion of the agency's $8 billion budget going to private corporations.[16]:178 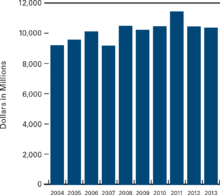 The NRO derives its funding both from the US intelligence budget and the military budget. In 1971, the annual budget was estimated to be around $1 billion (inflation adjusted $ 6.3 billion in 2020).[17] A 1975 report by Congress's Commission on the Organization of the Government for the Conduct of Foreign Policy states that the NRO had "the largest budget of any intelligence agency".[19] By 1994, the annual budget had risen to $6 billion (inflation adjusted $ 10.3 billion in 2020),[45] and for 2010 it is estimated to amount to $15 billion (inflation adjusted $ 17.6 billion in 2020).[46] This would correspond to 19% of the overall US intelligence budget of $80 billion for FY2010.[47] For Fiscal Year 2012 the budget request for science and technology included an increase to almost 6% (about $600 million) of the NRO budget after it had dropped to just about 3% of the overall budget in the years before.[44]

Under the Freedom of Information Act, the NRO declassified a list of secret directives for internal use. The following is a list of the released directives, which are available for download:

At a press event prior to the establishment of USSPACECOM, the Commander of USSPACECOM, US Air Force General Raymond stated that the NRO will “respond to the direction of the United States Space Command commander” to “protecting and defending those (space) capabilities”. General Raymond further stated that “we (NRO and USSPACECOM) have a shared concept of operations, we have a shared vision and a shared concept of operations. We train together, we exercise together, we man the same C2 center, if you will, at the National Space Defense Center”

NRO's technology is likely more advanced than its civilian equivalents. In the 1980s, the NRO had satellites and software that were capable of determining the exact dimensions of a tank gun.[19] In 2012 the agency donated two space telescopes to NASA. Despite being stored unused, the instruments are superior to the Hubble Space Telescope. One journalist observed, "If telescopes of this caliber are languishing on shelves, imagine what they're actually using."[49] 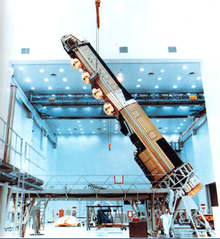 KH-9 Hexagon during integration at Lockheed

The NRO spacecraft include:[51]

This list is likely to be incomplete, given the classified nature of many NRO spacecraft.

The NRO Management Information System (NMIS) is a computer network used to distribute NRO data classified as Top Secret. It is also known as the Government Wide Area Network (GWAN).[54]

The Verge published an article in July 2019 describing Sentient as a product of the NRO, which is “an omnivorous analysis tool, capable of devouring data of all sorts, making sense of the past and present, anticipating the future, and pointing satellites toward what it determines will be the most interesting parts of that future”.[55]

Retrieved from "https://en.wikipedia.org/w/index.php?title=National_Reconnaissance_Office&oldid=941604264"
Categories:
Hidden categories:
The article is a derivative under the Creative Commons Attribution-ShareAlike License. A link to the original article can be found here and attribution parties here. By using this site, you agree to the Terms of Use. Gpedia Ⓡ is a registered trademark of the Cyberajah Pty Ltd.