Jump to navigation Jump to search
Style of architecture 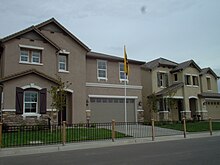 Neo-eclectic homes built in 2006 in California 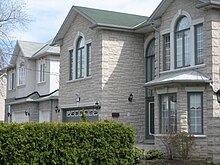 Neo-eclectic homes in the Willowdale district of Toronto, Ontario 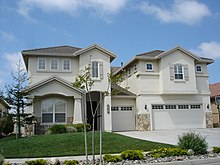 Neo-eclectic architecture is a name for an architectural style that has influenced residential building construction in North America in the later part of the 20th century and early part of the 21st. It is a contemporary version of Revivalism that has perennially occurred since Neoclassical architecture developed in the mid 18th century.

In contrast to the occasionally faux and low-budget neo-eclectic detached homesteads, the term New Classical architecture identifies contemporary buildings that stick to the basic ideals, proportions, materials and craftsmanship of traditional architecture.

Neo-eclectic architecture combines a wide array of decorative techniques taken from an assortment of different house styles. It is a response to clean and unadorned modernist styles such as the Mid-Century modern and Ranch-style houses that dominated North American residential design and construction in the first decades after the Second World War. It is an outgrowth of postmodern architecture, yet differs from postmodernism in that it is not creatively experimental.

Some neo-eclectic buildings will combine an array of different historical styles in a single building. A house so designed may have Cape Cod, Mission Revival, Tudor Revival, or Châteauesque and French Provincial elements all at the same time. Often houses, or whole subdivisions, will focus on one revival style. Different historical styles predominated in different regions. In California elements from the Mediterranean Revival and Spanish Colonial Revival Style continue to be a regional vernacular and popular. In New England and the Mid-Atlantic the Colonial Revival Style and Georgian Revival architecture combinations are common.[1]

In neo-eclectic architecture the revival elements are almost always decorative, consisting of surface elements such as claddings and windows. The basic construction of neo-eclectic houses is unchanged from previous house styles such as the ranch-style house. An important development leading to the modern neo-eclectic style is the popularity of EIFS, a form of external insulation that is easy to apply and can be coloured and shaped to appear like an array of different materials such as stucco and stone.

Neo-eclectic architecture is most prominent in what are pejoratively known as McMansions, but it has been embraced by almost all residential builders.[2] Across North America most suburbs built in the last three decades can largely be described as neo-eclectic[citation needed].

Critics of neo-eclectic architecture see the style as pretentious, wasteful and/or garish, and unoriginal.[3]

Retrieved from "https://en.wikipedia.org/w/index.php?title=Neo-eclectic_architecture&oldid=944669449"
Categories:
Hidden categories:
The article is a derivative under the Creative Commons Attribution-ShareAlike License. A link to the original article can be found here and attribution parties here. By using this site, you agree to the Terms of Use. Gpedia Ⓡ is a registered trademark of the Cyberajah Pty Ltd.