New Echota was the capital of the Cherokee Nation from 1825 to their forced removal in the 1830s. New Echota is located in present-day Gordon County, Georgia, 3.68 miles north of Calhoun, Georgia, and south of Resaca, Georgia. The site is a state park and a historic site, and is designated as a National Historic Landmark.

The site is at the confluence of the Coosawattee River and Conasauga River, which join to form the Oostanaula River, a tributary of the Coosa River. It is near Town Creek. Archeological evidence has shown that the site of New Echota had been occupied by ancient indigenous cultures prior to the Cherokee Native Americans, to whom it was a town of theirs named Gansagiyi or Gansagi; they renamed it New Echota in 1825 after making it the capital.

Prior to relocating to Gansagi and building the community of New Echota, the Cherokee had used the nearby town of Ustanali on the Coosawattee River as the seat of their tribe, beginning in 1788. Ustanali had been established in 1777 by refugees from the Cherokee Lower Towns in northwestern South Carolina. In that year, Old Tassel and several other Cherokee leaders were murdered while on an embassy to the State of Franklin. In response, warriors across the frontier increased attacks on European-American settlers, in addition to the Chickamauga Cherokee followers of Dragging Canoe, who were already in the midst of the Cherokee–American wars. Following the murders, Little Turkey was elected chief of the Cherokee. The seat of the Cherokee council was then moved from Chota to Ustanali.

A common English name for New Echota was "Newtown" or "New Town." These names are still used for the area around the State Park. Later Anglo-American settlers called the area "The Fork" and "Fork Ferry." 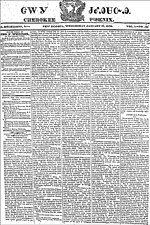 By 1819 the government of the Cherokee Nation was meeting in New Echota. On November 12, 1825, New Echota was officially designated the capital of the Cherokee Nation. The tribal council also began a building program that included construction of a two-story Council House, a Supreme Court, and later the office (printer shop) of the first Indian language and Cherokee newspaper, the Cherokee Phoenix. Here Elias Boudinot wrote, and Samuel Worcester, a missionary and printer, laid out the first Native American newspaper. Boudinot wrote it in English and Cherokee, using for the latter the new syllabary recently created by Sequoyah, with type cast by Worcester. Private homes, stores, a ferry and mission station were built in the outlying area of New Echota.

The town was quiet most of the year, but Cherokee Council meetings provided the opportunity for great social gatherings. During these meetings, several hundred Cherokees filled the town, arriving by foot, on horseback, or in stylish carriages.

Vann's Tavern, a tavern built by James Vann. Relocated to New Echota in 1955.[3]

In 1832, after Congressional passage of the Indian Removal Act, Georgia included Cherokee territory in its Sixth Land Lottery, allocating Cherokee land to white settlers. The Cherokee Nation had never ceded the land to the state. Over the next six years, the Georgia Guard operated against the Cherokee, evicting them from their properties. By 1834, New Echota was becoming a ghost town. Council meetings were moved to Red Clay, Cherokee Nation (now Tennessee). The United States urged the Cherokee to remove to Indian Territory, in exchange for their lands in Georgia.

On December 29, 1835, a small group of Cherokee (100–500 Cherokee known as Ridgeites or the Treaty Party who represented only a very small minority of Cherokee) signed the Treaty of New Echota in the home of Elias Boudinot. Signers included Major Ridge, John Ridge, and Andrew Ross, a brother of John Ross, the principal chief. Struggling to preserve some rights for the Cherokee, they agreed to removal in exchange for lands west of the Mississippi River, with the Cherokee to have sovereignty in that western territory. Despite objections from John Ross, who represented the large majority of Cherokee to the US government, Congress ratified the treaty. The US government encouraged the Cherokee to migrate west and eventually forced them out.

In 1838 the U.S. Army, under the command of Winfield Scott, began the forced removal of Cherokee from the state of Georgia. A Cherokee removal fort was located at New Echota, called Fort Wool. This held Cherokee from Gordon County and Pickens County until their removal. As the first group of Cherokee began their exodus to Rattlesnake Springs, Cherokee Nation (4 miles south of Charleston, Tennessee), the Cherokee from counties south and east of the area also were housed here.

After the Cherokee were fully removed in 1838, their capital remained abandoned for more than 100 years. Much of New Echota disappeared, though some of the houses continued to be used. Most notable was the house of Samuel Worcester, who was called "the Messenger," and a missionary to the Cherokee. When its landowners deeded land to be commissioned to the state for preservation, the Worcester House, the largest remaining structure, had been vacant for two years. The wear of the elements in that brief time was apparent.

From 1930 to 1950 the historical marker at the site was the Congressionally-designated New Echota Marker National Memorial.[4]

In March 1954, the archeologist Lewis Larsen from the Georgia Historical Commission and five men were sent to oversee the work of excavating New Echota. The team uncovered evidence not only of the Cherokee settlement in New Echota, but also of earlier American Indian cultures. They asked the National Park Service archeologist Joe Caldwell and two more workers to join them for the next two months as they continued excavation. The group recovered a Spanish coin dated 1802, crockery, household wares, bootery remains, a small quantity of lead, and 1700 other artifacts. They identified 600 items as having belonged to the Cherokee. In addition to the standard finds and remains of many buildings, Larsen and Caldwell astonished the world by discovering much of the type once used to print the Cherokee Phoenix.

On March 13, 1957, following the news of these archeological finds, the State of Georgia authorized reconstruction of the town of New Echota as a state park. They reconstructed such buildings as the Council House, the Supreme Court, the printer shop, a building of the Cherokee Phoenix, a common Cherokee cabin representing a home of an average family, and a middle-class Cherokee home, including outbuildings. Vann's Tavern, owned by Chief James Vann, is a restored building, with modern nails and replacement wooden parts. It was relocated from Forsyth County, Georgia (Chief Vann owned 14 taverns across the state of Georgia), as the original New Echota Vann Tavern was destroyed. The park contains the site of the former Elias Boudinot house, which serves as a memorial to Boudinot. The Worcester House was restored to its 19th-century condition. Together the buildings of the complex form an open-air museum.

Other sites are not open to the public, as they are now on private property. Across from the New Echota park are two farmhouse sites formerly owned by white men who had married Cherokee women. These sites are now part of an Elks Club golf course.

The New Echota Historical Park was opened to the public in 1962. Inside the office of the Cherokee Phoenix were displayed 600 pieces of type which had been used for the first American Indian newspaper. Later some type was moved to the museum and research facility which was built by the park. The Newtown Trail is a 1.2 mile interpreted trail that takes tourists to Town Creek (inside the center of New Echota), where the majority of the Cherokee had camped when the Council was in session. In 1973, the Department of Natural Resources, also known as Georgia State Parks and Historic Sites, took over New Echota Park and continues to operate and maintain this historic site.

The site is designated as a National Historic Landmark.[5]

Retrieved from "https://en.wikipedia.org/w/index.php?title=New_Echota&oldid=934536922"
Categories:
Hidden categories:
The article is a derivative under the Creative Commons Attribution-ShareAlike License. A link to the original article can be found here and attribution parties here. By using this site, you agree to the Terms of Use. Gpedia Ⓡ is a registered trademark of the Cyberajah Pty Ltd.