New Mexican Spanish (Spanish: español neomexicano, novomexicano) is a variety of Spanish spoken in the United States, primarily in Northern New Mexico and the southern part of the state of Colorado by the Hispanos of New Mexico. Despite a continual influence from the Spanish spoken in Mexico to the south by contact with Mexican migrants who fled to the US from the Mexican Revolution, New Mexico's unique political history and relative geographical and political isolation from the time of the annexation to the US have caused New Mexican Spanish to differ notably from the Spanish spoken in other parts of Hispanic America, with the exception of certain rural areas of southern Colorado, Northern Mexico, and Texas.[1]

Many speakers of traditional New Mexican Spanish are descendants of Spanish colonists who arrived in New Mexico in the 16th to the 18th centuries. During that time, contact with the rest of Spanish America was limited because of the Comancheria, and New Mexican Spanish developed closer trading links to the Comanche than to the rest of New Spain. In the meantime, some Spanish colonists co-existed with and intermarried with Puebloan peoples and Navajos, also enemies of the Comanche.[2]

After the Mexican–American War, New Mexico and all its inhabitants came under the governance of the English-speaking United States, and for the next 100 years, English-speakers increased in number.

Those reasons caused these main differences between New Mexican Spanish and other forms of Hispanic American Spanish: the preservation of forms and vocabulary from colonial-era Spanish (such as, in some places, haiga instead of haya or Yo seigo, instead of Yo soy), the borrowing of words from Rio Grande Indian languages for indigenous vocabulary (in addition to the Nahuatl additions that the colonists had brought), a tendency to "recoin" Spanish words for ones that had fallen into disuse (for example, ojo, whose literal meaning is "eye," was repurposed to mean "hot spring" as well), and a large proportion of English loanwords, particularly for technology (such as bos, troca, and telefón). Pronunciation also carries influences from colonial, Native American, and English sources.

In recent years, speakers have developed a modern New Mexican Spanish, called Renovador, which contains more modern vocabulary because of the increasing popularity of Spanish-language broadcast media in the US and intermarriage between New Mexicans and Mexican settlers. The modernized dialect contains Mexican Spanish slang (mexicanismos).[1]

The late-19th-century development of a culture of print media allowed New Mexican Spanish to resist assimilation toward either American English or Mexican Spanish for many decades.[3] The 1911 Encyclopædia Britannica, for instance, noted, "About one-tenth of the Spanish-American and Indian population [of New Mexico] habitually use the English language." Until the 1930s or the 1940s, many speakers never learned English, and even afterward, most of their descendants were bilingual with English until the 1960s or the 1970s. The advance of English-language broadcast media accelerated the decline.

The increasing popularity of Spanish-language broadcast media in the US and intermarriage of Mexican settlers and descendants of colonial Spanish settlers have somewhat increased the number of those speaking New Mexican Spanish.[citation needed] 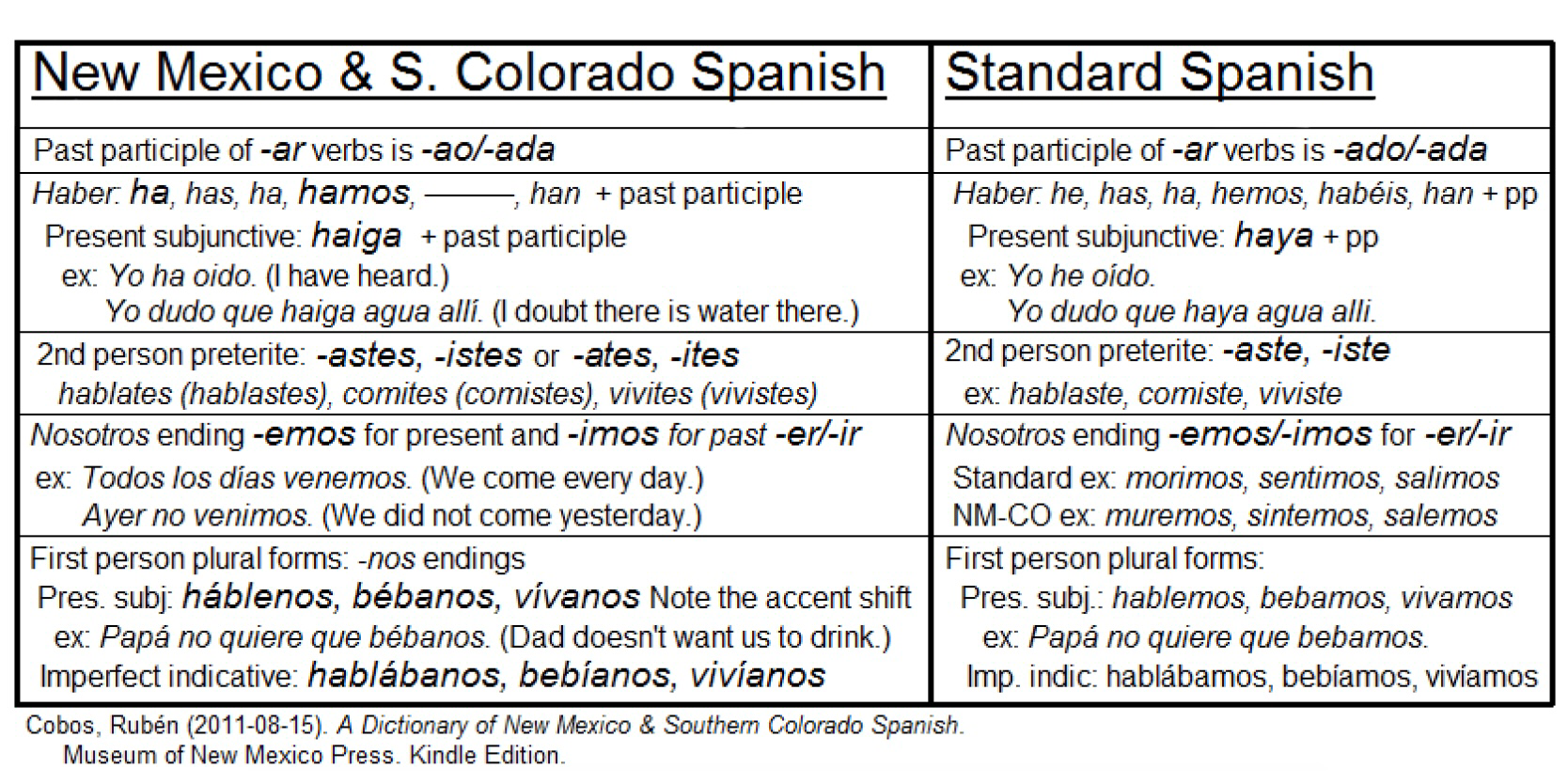 The main grammatical differences between New Mexican Spanish and Standard Spanish, according to Cobos.[1]

Besides a great deal of phonological variation, there are various morphological differences throughout New Mexican Spanish, usually in the verb conjugations or endings:

There are many variations of New Mexican Spanish (they can be manifest in small or large groups of speakers, but there are exceptions to nearly all of the following tendencies):

New Mexican Spanish has been in contact with several indigenous American languages, most prominently those of the Pueblo and Navajo peoples with whom the Spaniards and Mexicans coexisted in colonial times.[citation needed] For an example of loanword phonological borrowing in Taos, see Taos loanword phonology.

New Mexico law grants Spanish a special status. For instance, constitutional amendments must be approved by referendum and must be printed on the ballot in both English and Spanish.[7] Certain legal notices must be published in English and Spanish, and the state maintains a list of newspapers for Spanish publication.[8] Spanish was not used officially in the legislature after 1935.[9]

Though the New Mexico Constitution (1912) provided that laws would be published in both languages for 20 years and that practice was renewed several times, it ceased in 1949.[9][10] Accordingly, some describe New Mexico as officially bilingual,[11][12][13] but others disagree.[9][14]

Retrieved from "https://en.wikipedia.org/w/index.php?title=New_Mexican_Spanish&oldid=965013192"
Categories:
Hidden categories:
The article is a derivative under the Creative Commons Attribution-ShareAlike License. A link to the original article can be found here and attribution parties here. By using this site, you agree to the Terms of Use. Gpedia Ⓡ is a registered trademark of the Cyberajah Pty Ltd.