New York Undercover is an American police drama that aired on the FOX television network from September 8, 1994, to February 11, 1999. The series starred Malik Yoba as Detective J.C. Williams and Michael DeLorenzo as Detective Eddie Torres, two undercover detectives in New York City's Fourth Precinct who were assigned to investigate various crimes and gang-related cases. The cast also included Patti D'Arbanville-Quinn as their superior, Lt. Virginia Cooper, and Lauren Vélez, who joined the cast in the second season as Nina Moreno, fellow detective and love interest to Torres. New York Undercover was co-created and produced by Dick Wolf, and its storyline takes place in the same fictional universe as Wolf's NBC series Law & Order, its spin-offs, the Chicago series, and Homicide: Life on the Street.

New York Undercover (whose working title during development was Uptown Undercover, named after the record label, Uptown Records, whose founder and CEO, Andre Harrell, was also the executive producer of the series)[1] is notable for being the first police drama on American television to feature two people of color in the starring roles.[2] In contrast to the popularity of NBC's "Must See TV" on Thursday nights in the 1990s, many African-American viewers flocked to Fox's Thursday night line-up of Living Single, New York Undercover, and Martin.

In addition to the main storylines in each episode, subplots explored the private lives of the show's characters. For example, Det. Williams struggled to raise his young son, Gregory (George O. Gore II), while Torres was shown to be fighting family and other related problems, including having to cope with his father's drug addiction and HIV-positive status, and a childhood friend turned organized-crime boss.

At the beginning of the third season, a new detective, Tommy McNamara (Jonathan LaPaglia), was introduced as a principal character. In the third-season finale in May 1997, Torres and Moreno are married. However, in that same episode, Torres and McNamara are both killed by a gang of bank robbers.

The series returned with a new cast for its fourth and final season in January 1998. Williams and Moreno were assigned to a new unit, resulting in Cooper being dropped from the cast. Joining the detectives were Lt. Malcolm Barker (played by Tommy Ford), Det. Nell Delaney (Marisa Ryan), and Det. Alec Stone (Josh Hopkins). The new unit eventually captured the last bank robber responsible for the deaths of Torres and McNamara. 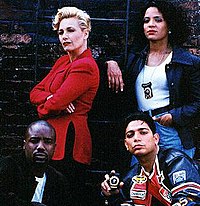 Numerous actors made appearances in two or more episodes portraying different characters. Before joining the cast in Season 2 as Nina Moreno, Lauren Velez appeared in the first-season episode "Olde Tyme Religion" as a believer in Santería. Additionally, J.K. Simmons guest starred as Sgt. Treadway in the Season 2 episode "Unis," returning in Season 4's "Mob Street" as Law & Order police psychiatrist Emil Skoda. Michelle Hurd played a recurring role in Seasons 1 and 2 as A.D.A. Reynolds, but returned as a criminal in Season 3's "No Place Like Hell." Joe Lisi appeared in the second-season episode "Bad Blood" before assuming a recurring role as the Chief of Detectives in Season 4. Both Jesse L. Martin and Ice-T portrayed criminals on this series before ultimately landing their iconic roles as detectives on Law & Order and Law & Order: SVU, respectively.

On December 5, 2018, Deadline reported that series creator Dick Wolf and ABC were in talks to reboot the series.[3] Six days later, ABC officially committed the reboot to a pilot.[4]

On January 31, 2019, ABC officially ordered the reboot to pilot, also revealing that it would officially be a revival of the original series, featuring both old characters and a new cast.[5] In February 2019, both Malik Yoba and Lauren Veléz were confirmed to reprise their respective roles as J.C. Williams and Nina Moreno, with Williams now being the overseeing officer of the new young detectives, and Moreno being retired, but retaining ties to her old unit. On March 12, 2019, ABC cast Toby Sandeman and Otmara Marrero as the revival's two lead detectives Nat Gilmore and Melissa Ortiz, as well as Anna Enger and Octavio Pizano as supporting detectives Lisa Kim and Moses Hernandez, and MC Lyte as Lieutenant April Freeman, the unit's new boss.[6]

Retrieved from "https://en.wikipedia.org/w/index.php?title=New_York_Undercover&oldid=970691949"
Categories:
Hidden categories:
The article is a derivative under the Creative Commons Attribution-ShareAlike License. A link to the original article can be found here and attribution parties here. By using this site, you agree to the Terms of Use. Gpedia Ⓡ is a registered trademark of the Cyberajah Pty Ltd.