Nineveh Governorate (Arabic: محافظة نينوى‎,[3], Syriac: ܗܘܦܪܟܝܐ ܕܢܝܢܘܐ‎, romanized: Hoparkiya d’Ninwe[4][5], Kurdish: Parêzgeha Neynewa ,پارێزگای نەینەوا‎[6][7]) is a governorate in northern Iraq that contains the ancient Assyrian city of Nineveh. It was an integral part of Assyria from the 25th century BC to the 7th century AD. It has an area of 37,323 km2 (14,410 sq mi) and an estimated population of 2,453,000 people in 2003. Its chief city and provincial capital is Mosul, which lies across the Tigris river from the ruins of ancient Nineveh. Tal Afar is the second-biggest city. Before 1976, it was called Mosul Province and included the present-day Dohuk Governorate, which is now part of the autonomous Kurdistan Region.[8]

An ethnically, religiously and culturally diverse region, it has been subject to attacks by the terrorist organization known as the Islamic State of Iraq and the Levant, with Mosul being captured on 10 June 2014, and many places of worship and historic ruins and monuments destroyed.[9] A massive offensive to retake the city, dubbed Operation "We Are Coming, Nineveh" (قادمون يا نينوى; Qadimun Ya Naynawa), began in October 2016.[10][11] 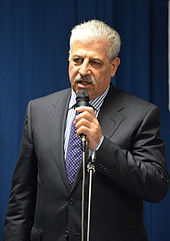 Its two cities endured the 2003 Invasion of Iraq and emerged unscathed. In 2004, however, Mosul and Tal Afar were the scenes of fierce battles between US-led troops and Iraqi insurgents. The insurgents moved to Nineveh after the Battle of Fallujah in 2004.

After the invasion, the military of the province was led by (then Major General) David Petraeus of the 101st Airborne Division and later by (then Brigadier General) Carter Ham as the multi-national brigade for Iraq. During the time, the American civil head of the local office of the Coalition Provisional Authority was a US Foreign Service Officer and former Kurdish refugee to the States. Mustafa administered her nominees on the provincial council and through members of the Kashmoula family.

In June 2004, Osama Kashmoula became the interim governor of the province and in September of the same year he was assassinated en route to Baghdad. He was succeeded as interim Governor by Duraid Kashmoula, who was elected governor in January 2005. Duraid Kashmoula resigned in 2009.[12] In April 2009, Atheel al-Nujaifi, a hardline Arab nationalist and member of Al-Hadba, became governor.[13] While al-Nujaifi's Arab Muttahidoon bloc lost its majority to the Kurdish Brotherhood and Coexistence Alliance List in the 2013 provincial election, al-Nujaifi was reelected as governor by a larger Sunni Arab coalition[14] that was later formalized as the Nahda Bloc.

In June 2014, insurgents from the Islamic State of Iraq and the Levant (known as ISIS or ISIL) overran the capital Mosul, forcing an estimated 500,000 refugees to flee the area,[15] including governor al-Nujaifi,[16] who was subsequently deposed by the Iraqi Parliament.[17]

While the Kurdish list proposed Hassan al-Allaf, an Arab affiliated with the Islamic Party,[18] the provincial council elected Nofal Hammadi (formerly Loyalty to Nineveh List) with the votes of the Nahdha bloc.[19]

An offensive to retake Mosul from ISIL control began in October 2016, with Iraqi and Kurdish soldiers supported by a U.S.-led coalition of 60 nations.[11]

Nineveh Governorate comprises 30 districts, listed below with their areas[23] and populations as estimated in 2003:[24]

Nineveh Province is multiethnic. There are significant numbers of Arabs, Turkmens, Assyrians, Kurds as well as Yazidis both in towns and cities, and in their own specific villages and regions. There are also many Armenians, Kawliya, Mandeans and Shabaks.

Many Assyrian leaders advocate an autonomous Assyrian homeland within Nineveh Province for the indigenous Assyrians.[25] Most National Iraqi leaders have not taken this plan seriously.

Retrieved from "https://en.wikipedia.org/w/index.php?title=Nineveh_Governorate&oldid=953484608"
Categories:
Hidden categories:
The article is a derivative under the Creative Commons Attribution-ShareAlike License. A link to the original article can be found here and attribution parties here. By using this site, you agree to the Terms of Use. Gpedia Ⓡ is a registered trademark of the Cyberajah Pty Ltd.