Jump to navigation Jump to search
This article is about the United States' version. For similar objects worldwide, see Nuclear briefcase. 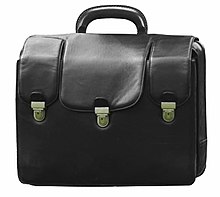 Model-reconstruction of the briefcase used by the president of the United States to authorize a nuclear attack while away from fixed command centers.

The nuclear football (also known as the atomic football, the president's emergency satchel, the Presidential Emergency Satchel,[1] the button, the black box, or just the football) is a briefcase, the contents of which are to be used by the President of the United States to authorize a nuclear attack while away from fixed command centers, such as the White House Situation Room. It functions as a mobile hub in the strategic defense system of the United States. It is held by an aide-de-camp.

President Obama and Senator Schumer in 2013; a military aide carrying the nuclear football stands by the helicopter at the right.

According to a Washington Post article, the president is always accompanied by a military aide carrying a "football" with launch codes for nuclear weapons.[2] The football is a metal Zero Halliburton briefcase[3] carried in a black leather "jacket". The package weighs around 45 pounds (20 kilograms).[4]

In his book Breaking Cover, which was released on August 11 of 1980,[5] Bill Gulley, the former director of the White House Military Office, wrote:[4]

There are four things in the Football. The Black Book containing the retaliatory options, a book listing classified site locations, a manila folder with eight or ten pages stapled together giving a description of procedures for the Emergency Alert System, and a three-by-five-inch [7.5 × 13 cm] card with authentication codes. The Black Book was about 9 by 12 inches [23 × 30 cm] and had 75 loose-leaf pages printed in black and red. The book with classified site locations was about the same size as the Black Book, and was black. It contained information on sites around the country where the president could be taken in an emergency.

A small antenna protrudes from the bag near the handle, suggesting that it also contains communications equipment of some kind.[4] 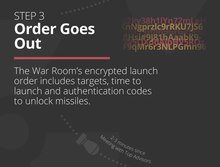 If the president (who is commander-in-chief of the armed forces) decides to order the use of nuclear weapons, he or she would be taken aside by the "carrier" and the briefcase would be opened. A command signal, or "watch" alert, would then be issued to the Joint Chiefs of Staff. The president would then review the attack options with the secretary of defense and the chairman of the Joint Chiefs of Staff and decide on a plan, which could range from a single cruise missile to multiple ICBM launches. These are preset war plans developed under OPLAN 8010 (formerly the Single Integrated Operational Plan). Then, using Milstar, the aide, a military officer, would contact the National Military Command Center and NORAD to determine the scope of the pre-emptive nuclear strike and prepare a second strike, following which Milstar/Advanced Extremely High Frequency or Boeing E-4Bs and TACAMOs would air the currently valid nuclear launch code to all nuclear delivery systems operational. Where a two-person verification procedure would be executed following this, the codes would be entered in a Permissive Action Link.[citation needed]

Before the order can be processed by the military, the president must be positively identified using a special code issued on a plastic card, nicknamed the "biscuit".[6] The United States has a two-man rule in place at the nuclear launch facilities, and while only the president can order the release of nuclear weapons, the order must be verified by the secretary of defense to be an authentic order given by the president (there is a hierarchy of succession in the event that the president is killed in an attack). This verification process deals solely with verifying that the order came from the actual president. The secretary of defense has no veto power and must comply with the president's order.[6] Once all the codes have been verified, the military would issue attack orders to the proper units. These orders are given and then re-verified for authenticity. It is argued that the president has almost sole authority to initiate a nuclear attack since the secretary of defense is required to verify the order, but cannot veto it.[7][8][9]

The football is carried by one of the rotating presidential military aides, whose work schedule is described by a top-secret rota (one from each of the five service branches). This person is a commissioned officer in the U.S. military, pay-grade O-4 or above, who has undergone the nation's most rigorous background check (Yankee White).[10][11] These officers are required to keep the football readily accessible to the president at all times. Consequently, the aide, football in hand, is always either standing or walking near the president, including riding on Air Force One, Marine One, or the presidential motorcade with the president.[11]

The operational plan for nuclear strike orders is entirely concerned with the identity of the commanding officer and the authenticity of the order, and there are no safeguards to verify that the person issuing the order is actually sane. Notably, Major Harold Hering was discharged from the Air Force in late 1973 for asking the question "How can I know that an order I receive to launch my missiles came from a sane president?" [12]

The football dates back to Dwight D. Eisenhower, but its current usage came about in the aftermath of the Cuban Missile Crisis, when John F. Kennedy was concerned that a Soviet commander in Cuba might launch missiles without authorization from Moscow.[10] Kennedy asked several questions related to the release of US nuclear weapons. These were:

An Associated Press article stated that the nickname "football" was derived from an attack plan codenamed "Dropkick".[4] The nickname has led to some confusion as to the nature—and even the shape—of the device, as the leather bag or "jacket" in which it is carried appears large enough to contain an actual football.

During their presidencies, both Jimmy Carter and Ronald Reagan preferred to keep the launch codes in their jacket pockets.[14] Congressman John Kline served as a colonel in the United States Marine Corps and carried the football for presidents Carter and Reagan.[15]

The coded card was separated from Ronald Reagan immediately after the 1981 assassination attempt against him.[16] He was separated from it when his clothing was cut off by the emergency department trauma team. It was later discovered lying unsecured in one of his shoes on the emergency department floor. This led to an urban legend that Reagan carried the code in his sock. Reagan was separated from the rest of the football as well, because the officer who carried it was left behind as the motorcade sped away with the wounded president. On occasion, the president has left his aide carrying the football behind. This happened to Nixon in 1973; after Nixon presented Soviet leader Leonid Brezhnev with a Lincoln Continental at Camp David, Brezhnev unexpectedly drove with Nixon off the retreat onto a highway while leaving Nixon's Secret Service personnel behind, separating Nixon from the football (and his security detail) for nearly 30 minutes.[17] Presidents Gerald Ford, Jimmy Carter, George H. W. Bush,[18] and Bill Clinton have also been separated from the football.[16]

As the football is required to be near the president at all times, the aides carrying it frequently appear in press photographs.[19] In February 2017, on the occasion of North Korea firing a nuclear-capable Pukkuksong-2 ballistic missile over the Sea of Japan,[20] a guest at President Trump's Mar-a-Lago resort posed for a photo with the military aide carrying the football, posting the image to Facebook and identifying the aide by his first name.[21] U.S. military officials clarified that it was neither illegal nor against proper procedure for the officer to appear in such a photo, although they admitted that the situation was strange.[19]

On November 8, 2017, when President Trump made an official state visit to China, U.S. military aides carrying the football were reportedly involved in a brief tussle with Chinese security officials, after the latter tried to bar the former access to the Hall of the People auditorium. According to Jonathan Swan, the political correspondent behind the report, wrote: "...at no point did the Chinese have the nuclear football in their possession or even touch the briefcase. ... [T]he head of the Chinese security detail apologised to the Americans afterwards for the misunderstanding."[22]

Retrieved from "https://en.wikipedia.org/w/index.php?title=Nuclear_football&oldid=966512325"
Categories:
Hidden categories:
The article is a derivative under the Creative Commons Attribution-ShareAlike License. A link to the original article can be found here and attribution parties here. By using this site, you agree to the Terms of Use. Gpedia Ⓡ is a registered trademark of the Cyberajah Pty Ltd.