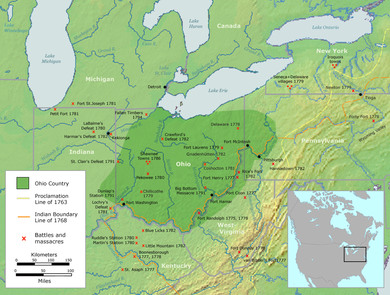 The Ohio Country with battles and massacres between 1775 and 1794

The Ohio Country (sometimes called the Ohio territory[1] or Ohio Valley by the French) was a name used in the mid to late 18th century for a region of North America west of the Appalachian Mountains and north of the upper Ohio and Allegheny Rivers extending to Lake Erie. The area encompassed roughly all of present-day Ohio, northwestern West Virginia, Western Pennsylvania, and a wedge of southeastern Indiana.[2]

It was disputed in the 17th century by the Iroquois and other Native American tribes. In the early 18th century it became part of the New France administrative district of Louisiane. France and Great Britain fought the French and Indian War over it in the mid-18th century, resulting in its cession to the British in 1763. During British sovereignty, several minor "wars" including Pontiac's Rebellion and Lord Dunmore's War were fought here. Ohio Country became part of unorganized U.S. territory in 1783 with the Treaty of Paris. It was one of the first frontier regions of the United States. Several colonial states had conflicting claims to portions of it, including Connecticut, Virginia, New York and Pennsylvania. In 1787, states' claims were largely extinguished and it became part of the larger organized Northwest Territory. Most of the former area north and west of the Ohio River became the state of Ohio in 1803.

In the 17th century, the area north of the Ohio River had been occupied by the Algonquian-speaking Shawnee and some Siouan language-speaking tribes. Around 1660, during a conflict known as the Beaver Wars, the Iroquois seized control of the Ohio Country, driving out the Shawnee and Siouans, such as the Omaha and Ponca, who settled further northwest and west. The Iroquois conquered and absorbed the Erie, who also spoke an Iroquoian language. The Ohio Country remained largely uninhabited for decades, and was used primarily as a hunting ground by the Iroquois.

In the 1720s, a number of Native American groups began to migrate to the Ohio Country from the East, driven by pressure from encroaching colonists. By 1724, Delaware Indians had established the village of Kittanning on the Allegheny River in present-day western Pennsylvania. With them came those Shawnee who had historically settled in the east. Other bands of the scattered Shawnee tribe began to return to the Ohio Country in the decades that followed. A number of Seneca and other Iroquois also migrated to the Ohio Country, moving away from the French and British imperial rivalries south of Lake Ontario. The Seneca were the westernmost of the Iroquois nations based in New York.

In the late 1740s and the second half of the 18th century, the British angled for control of the territory.[3] In 1749, the British Crown, via the colonial government of Virginia, granted the Ohio Company a great deal of this territory on the condition that it be settled by British colonists.[4]

With the arrival of the Europeans, both Great Britain and France claimed the area and both sent fur traders into the area to do business with the Ohio Country Indians. The Iroquois League claimed the region by right of conquest. The rivalry between the two European nations, the Iroquois, and the Ohio natives for control of the region played an important part in the French and Indian War from 1754 through 1760. After initially remaining neutral, the Ohio Country Indians largely sided with the French. Armed with supplies and guns from the French, they raided via the Kittanning Path against British settlers east of the Alleghenies. After they destroyed Fort Granville in the summer of 1756, the colonial governor John Penn ordered Lt. Colonel John Armstrong to destroy the Shawnee villages west of the Alleghenies.

The British defeated the French and their allies. Meanwhile, other British and colonial forces drove the French from Fort Duquesne and built Fort Pitt, the origin of the city of Pittsburgh, Pennsylvania. In the 1763 Treaty of Paris, France ceded control of the entire Ohio region to Great Britain, without consulting its native allies, who still believed they had territorial claims. Colonies such as Pennsylvania and Virginia claimed some of the westward lands by their original charters.

In an attempt to improve relations with the Native Americans to encourage trade and avoid conflicts with colonists, George III in his Royal Proclamation of 1763 placed the Ohio Country in what was declared an Indian Reserve, stretching from the Appalachian Mountains west to the Mississippi River and from as far north as Newfoundland to Florida. The British ordered the existing settlers (mostly French) either to leave or obtain special permission to stay and prohibited British colonists from settling west of the Appalachians.

The area was officially closed to European settlement by the Royal Proclamation of 1763. The Crown no longer recognized claims that the colonies made on this territory. On June 22, 1774, the British Parliament passed the Quebec Act; it annexed the region to the province of Quebec. Colonists in the Thirteen Colonies considered this one of the Intolerable Acts passed by Parliament, contributing to the American Revolution.

Despite the Crown's actions, frontiersmen from the Virginia and Pennsylvania colonies began to cross the Allegheny Mountains and came into conflict with the Shawnee. The Shawnee referred to the settlers as the Long Knives. Because of the threat posed by the colonists, the Shawnee and other nations of the Ohio Country chose to side with the British against the rebel colonists during the American Revolutionary War.

Americans wanted to establish control over the region. In 1778, after victories in the region by the Patriot general George Rogers Clark, the Virginia legislature organized the first American civil government in the region. They called it the Illinois County, which encompassed all of the lands lying west of the Ohio River to which Virginia had any claim. The high-water mark of the Native American struggle to retain the region was in 1782: the Ohio Nations and the British met in a council at the Chalawgatha village along the Little Miami River to plan what was the successful rout of the Americans at the Battle of Blue Licks, south of the Ohio River, two weeks later.

In 1783, following the Treaty of Paris, Great Britain ceded the area to the United States (US). The government immediately opened it to settlement by American pioneers, considering it unorganized territory. The Ohio Country quickly became one of the most desirable locations for Trans-Appalachian settlements, in particular among veterans of the Revolutionary War.

In the Treaty of Fort Stanwix and Treaty of Fort McIntosh the US fixed boundaries between United States and tribal lands. The Shawnee and other tribes continued to resist US encroachment into their historic lands. This resistance led to the Northwest Indian War after the Revolution.

Considered highly desirable, the area was subject to the overlapping and conflicting territorial ambitions of several eastern states:

Incorporation to the Northwest Territory

States' claims were ceded to the United States between 1780 and 1786. In July, 1787, most of Ohio Country, the southern peninsula of what is today the state of Michigan and westward Illinois Country were incorporated as the Northwest Territory. In 1803, most of what was formerly Ohio country north and west of the Ohio River was incorporated as the free state of Ohio.

Retrieved from "https://en.wikipedia.org/w/index.php?title=Ohio_Country&oldid=939005950"
Categories:
Hidden categories:
The article is a derivative under the Creative Commons Attribution-ShareAlike License. A link to the original article can be found here and attribution parties here. By using this site, you agree to the Terms of Use. Gpedia Ⓡ is a registered trademark of the Cyberajah Pty Ltd.