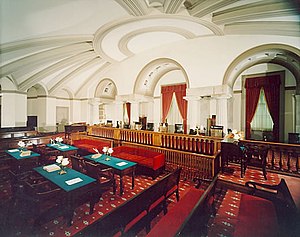 Chamber as viewed from southwest.

Construction on the North Wing began in 1793 with the laying of the cornerstone by President George Washington. Although interior work was unfinished, the Senate relocated from its 1791 Philadelphia location, Congress Hall, in November 1800. The interior of the chamber, including an upper level public gallery, was finally completed early in 1805, just in time for the start of the Samuel Chase impeachment trial.[1] Its completion allowed the Federal government to move to Washington, D.C.. The North Wing, as the only completed section of the Capitol, originally hosted both houses of the United States Congress, the Library of Congress, and the Supreme Court.[2] 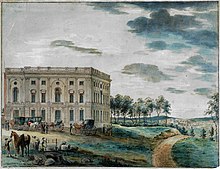 The North Wing upon completion in 1800

In addition to the Chase trial, the chamber was the location of President Thomas Jefferson's inauguration in 1801. However, by 1806, the North Wing was already deteriorating from heavy use and required repairs. The Architect of the Capitol at the time, Benjamin Henry Latrobe, decided that the repairs would provide an opportunity to expand room space in the Capitol by dividing the chamber in half. The upper half would serve as a new chamber for the Senate (that area is now known as the Old Senate Chamber), and the lower half would be used for the Supreme Court.[3]

The size and structure of Latrobe's vaulted, semicircular ceiling were virtually unprecedented in the United States.[3] The room is 50 feet (15 m) deep and 74 feet 8 inches (22.76 m) wide. Construction began in November 1806 with the gutting of the former two-story Senate Chamber and rooms above it, and lasted until 1810. The process was not without tragedy, when an assistant to Latrobe, John Lenthall, Clerk of the Works, was killed upon removing a center wooden ceiling support prematurely against Latrobe's advice. The result was that the unfinished masonry ceiling collapsed crushing Lenthall in the process.[3] Lenthall's death was a setback, not only to construction, but to Latrobe's reputation as an architect, which he struggled to rebuild for the rest of his career.

Fire of 1814 and reconstruction 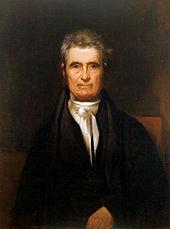 The Supreme Court barely had the opportunity to hear cases in the chamber, before the justices were forced to leave Washington by the threat of British invasion during the War of 1812. On August 24, 1814, the British successfully took the city, and set fire to many of the recently completed buildings of the fledgling capital, including the North and South wings of the Capitol building. Despite the disaster which left much of the North Wing gutted, the chamber with its vaulted ceiling survived. With safety in mind, however, Latrobe ordered the ceiling broken down and rebuilt for the final time in 1815. Latrobe resigned two years later, and it was under his successor, Charles Bulfinch, that the chamber was completed in 1819, in time for the next session of the Supreme Court.[3]

The Supreme Court resided in the chamber for the next forty-one years, until 1860. In that time period, the court heard arguments on such landmark cases as McCulloch v. Maryland, Gibbons v. Ogden, Dred Scott v. Sandford, and United States v. The Amistad. Two Chief Justices—John Marshall and Roger Taney—presided over the Supreme Court in the chamber.[3]

The Law Library of Congress occupied the chamber 1860–1941

Upon the departure of the Supreme Court to the Old Senate Chamber upstairs in 1860, the chamber was put to use as the Law Library of Congress until 1941. After the Supreme Court vacated the Capitol building itself for their present-day quarters in the Supreme Court building, the room was used as a reference library, and later as a committee room for the Joint Committee on Atomic Energy from 1955 to 1960. From 1960 to 1972, the chamber was given the rather mundane purpose of being a storage room, until Congress voted to restore the chamber to its antebellum appearance where everyday citizens can come and visit the historic site.

An 1854 diagram of the chamber was used to establish the layout and positioning of furniture in the chamber, and a portrait of John Marshall provided clues towards a mahogany railing and the carpet pattern. Still existing furnishings in the possession of the United States Capitol were sent to the chamber, as well as donated items such as Roger Taney's chair. By 1975, the chamber was opened to the public and has served as a museum ever since.[3]

View of Room from Justices' desks.

There are several notable pieces of artwork in the Old Supreme Court Chamber. There are four marble busts of the first four Chief Justices of the Supreme Court: John Jay, John Rutledge, Oliver Ellsworth, and John Marshall. A bust of Roger Taney, as well his original robe on display, is found in the adjacent robing room, which serves as the entrance for visitors into the chamber. Above one fireplace is a clock that is said apocryphally to be ordered by Roger Taney and set five minutes forward under his direction to promote promptness on the court proceedings.[5] Above the clock is a plaster relief of Lady Justice, notable for a lack of blindfold. She is accompanied by America, depicted as a winged youth, holding the United States Constitution as a star overhead shines light upon the document. Although never specified by the artist,[further explanation needed] Justice looks to the document with her unblinded eyes. An eagle seen protecting law books and an owl beneath Justice, two symbolic birds, are featured in the sculpture. The relief was the work of Carlo Franzoni in 1817.[3]

On July 22, 2020, in the midst of the George Floyd protests, the U.S. House of Representatives voted 305–113 to remove a bust of Chief Justice Roger B. Taney (as well as statues honoring figures who were part of the Confederacy during the Civil War) from the U.S. Capitol and replace it with a bust of Justice Thurgood Marshall. The bill called for removal of Taney's bust within 30 days after the law's passage. The bust had been mounted in the old robing room adjacent to the Old Supreme Court Chamber in the Capitol Building. The bill (H.R. 7573[6]) also created a "process to obtain a bust of Marshall ... and place it there within a minimum of two years."[7] After the bill reached the Republican-led Senate on 30 July 2020 (S.4382) it was referred to the Committee on Rules and Administration, but no further action on it was taken.[8]

Retrieved from "https://en.wikipedia.org/w/index.php?title=Old_Supreme_Court_Chamber&oldid=991733666"
Categories:
Hidden categories:
The article is a derivative under the Creative Commons Attribution-ShareAlike License. A link to the original article can be found here and attribution parties here. By using this site, you agree to the Terms of Use. Gpedia Ⓡ is a registered trademark of the Cyberajah Pty Ltd.