Operation Babylift was the name given to the mass evacuation of children from South Vietnam to the United States and other countries (including Australia, France, West Germany, and Canada) at the end of the Vietnam War (see also the Fall of Saigon), on April 3–26, 1975. By the final American flight out of South Vietnam, over 3,300 infants and children had been evacuated, although the actual number has been variously reported.[1][2][3][4] Along with Operation New Life, over 110,000 refugees were evacuated from South Vietnam at the end of the Vietnam War. Thousands of children were airlifted from Vietnam and adopted by families around the world. 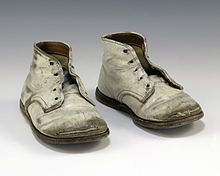 With the central Vietnamese city of Da Nang having fallen in March, and with Saigon under attack and being shelled, on April 3, 1975, U.S. President Gerald Ford announced that the U.S. government would begin evacuating orphans from Saigon on a series of 30 planned flights aboard Military Airlift Command (MAC) C-5A Galaxy and C-141 Starlifter cargo aircraft operated by 62nd Airlift Wing of the United States Air Force under the command of Major General Edward J. Nash[5][6].

Over 2,500 children were relocated and adopted by families in the United States and by its allies.[7] The operation was controversial because there was question about whether the evacuation was in the children's best interest, and because not all the children were orphans.[3]

When American businessman Robert Macauley learned that it would take more than a week to evacuate the surviving orphans due to the lack of military transport planes, he chartered a Boeing 747 from World Airways and arranged for 300 orphaned children to leave the country, paying for the trip by mortgaging his house.[8]

Frederick M. "Skip" Burkle, Jr. served as the medical director of Operation Babylift. He gathered the orphans in Saigon, accompanied them to Clark AFP in the Philippines, and continued to care for them on the Boeing 747 across the Pacific Ocean to Los Angeles and then Long Beach Naval Support Activity.[9]

A C-5A Galaxy, serial number 68-0218, flew the initial mission of Operation Babylift departing from Tan Son Nhut Airport shortly after 4 p.m. on April 4, 1975. Twelve minutes after takeoff, there was what seemed to be an explosion as the lower rear fuselage was torn apart. The locks of the rear loading ramp had failed, causing the door to open and separate. A rapid decompression occurred. Control and trim cables to the rudder and elevators were severed, leaving only one aileron and wing spoilers operating. Two of the four hydraulic systems were out. The crew wrestled at the controls, managing to keep control of the plane with changes in power settings by using the one working aileron and wing spoilers. The crew descended to an altitude of 4,000 feet on a heading of 310 degrees in preparation for landing on Tan Son Nhut's runway 25L. About halfway through a turn to final approach, the rate of descent increased rapidly. Seeing they couldn't make the runway, full power was applied to bring the nose up. The C-5 touched down in a rice paddy. Skidding for a quarter of a mile, the aircraft became airborne again for a half mile before hitting a dike and breaking into four parts, some of which caught fire. According to DIA figures, 138 people were killed in the crash, including 78 children and 35 Defense Attaché Office, Saigon personnel.[10]

Retrieved from "https://en.wikipedia.org/w/index.php?title=Operation_Babylift&oldid=962784632"
Categories:
Hidden categories:
The article is a derivative under the Creative Commons Attribution-ShareAlike License. A link to the original article can be found here and attribution parties here. By using this site, you agree to the Terms of Use. Gpedia Ⓡ is a registered trademark of the Cyberajah Pty Ltd.