Partus sequitur ventrem (Latin for '"that which is brought forth follows the belly (womb)"'),[1] often abbreviated to partus, was a legal doctrine concerning the slave or free status of children born in the English royal colonies. It was borrowed from the civil law of Europe, which applied throughout the Americas in colonies of Spain, Portugal, France and the Dutch, among others. Incorporated into legislation in the British American colonies, partus held that the legal status of a child followed that of his mother. Thus, any child born to an enslaved woman was born into slavery, regardless of the ancestry or citizenship of the father. This principle was widely adopted into the laws regarding slavery in the colonies and the following United States, eliminating financial responsibility of fathers for children born into slavery, while securing the slave-owner's property right in the children.

Illustration of Margaret Garner, an escaped slave who killed two of her children so that they would not have to endure slavery.

Prior to the adoption of the doctrine in England's colonies, English common law had held that among English subjects, a child's basic legal status followed the father, based on the concept that a married couple were a unit headed by the father. The community could require the father to acknowledge illegitimate children and provide some support for them, and arrange for apprenticeships so the children were assured of learning a means of self-support. Courts wanted the fathers to take responsibility so the community did not have to support the children. At the same time, common law regarding chattel (personal property) held that the natural increase from personal property, including domestic animals, accrued to the owner. According to British jurist William Blackstone, the common law agreed with the civil law concept of partus sequitur ventrum, but had not generally applied it to humans.[2]

In 1658 Elizabeth Key was the first woman of African descent to bring a freedom suit in the Virginia colony, seeking recognition as a free woman of color, rather than being classified as a Negro (African) and slave. Her natural father was an Englishman and a member of the House of Burgesses. He had acknowledged her, had her baptized as a Christian in the Church of England, and arranged for her guardianship under an indenture before his death. Her guardian returned to England and sold the indenture to another man, who held Key beyond its term. When he died, the estate classified Key and her child (also the son of an English subject) as Negro slaves. Aided by a young English lawyer working as an indentured servant on the plantation, Key sued for her freedom and that of her infant son. She won her case.

The legal scholar Taunya Lovell Banks suggests the early cases in the colonies dealing with mixed-race children of ethnic Africans and English had more to do with determining "subjecthood" than with modern ideas about race or citizenship. English colonists were considered subjects of the Crown, but Africans and others, in England and the colonies at the time, were considered foreigners and not eligible for the rights of subjects. The fact that they were not Christians also caused the Africans to be classified as foreigners. The colonies had no process for naturalizing them as subjects, and citizenship had not been fully defined. The courts struggled to define the status of children born to couples of whom one was an English subject and the other a foreigner.[3]

The demands of labor led to importing more African slaves as the number of indentured servants declined in the late seventeenth century, related to conditions both in England and the colonies. The legal doctrine of partus was part of colonial law passed in 1662 by the Virginia House of Burgesses, and by other colonies soon afterward. It held that "all children borne in this country shall be held bond or free only according to the condition of the mother. ... "[4]

As at the time, most bond women were African and considered foreigners, their children likewise were considered foreigners and removed from consideration as English subjects. The racial distinction made it easier to identify them as "other." Slavery became a racial caste associated with Africans regardless of the proportion of English or European ancestry that children inherited from paternal lines. The principle became incorporated into state laws when the colonies achieved independence from Great Britain.

Some historians suggest the partus doctrine was based in the economic needs of a colony with perpetual labor shortages. Conditions were difficult, mortality was high, and the government was having difficulty attracting sufficient numbers of indentured servants.[3] The change also legitimized the sexual use of slave women by white planters, their sons, overseers and other white men. Resulting illegitimate mixed-race children were "confined" to slave quarters unless fathers took specific legal actions on their behalf. The new law in 1662 meant that white fathers were no longer required to legally acknowledge, support, or emancipate their illegitimate children by slave women. Men could sell their children or put them to work. 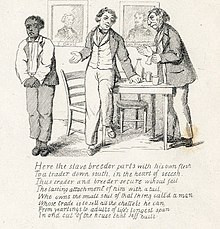 A slave-dealer sells his own mulatto son as a slave. (From the cartoon series The House that Jeff Built, David Claypoole Johnston, 1863).

Sex between white male masters and their female slaves, coupled with the partus law, resulted in generations of slaves of mixed-race ("mulatto") and even primarily European ("quadroon") ancestry, as European visitors noted in Virginia by the eighteenth century.[5]

Such was the case in Monticello, the plantation household of US President Thomas Jefferson. In 1773, his wife Martha inherited more than 100 slaves from her father John Wayles, including the eleven mixed-race members of the Hemings family. Betty Hemings, daughter of an enslaved African woman and an English sea captain, was taken as a concubine by the widower Wayles after he buried three wives, and they had six mixed-race children during a 12-year relationship. The children, the youngest of whom was Sally Hemings, were three-quarters white, and half-siblings to Martha Wayles.[6]

Most historians believe that Jefferson, a widower in his 40s, repeated this pattern, taking Sally Hemings as his concubine. They were believed to have a 38-year, monogamous, stable relationship; and Jefferson fathered her six children, four of whom survived to adulthood.[6][7] With seven-eighths European ancestry, they were legally white under Virginia law of the time, although born into slavery. After moving to the North, three of the four entered white society as adults. Some of them and their descendants changed their names and disappeared into history. One direct male descendant was shown in 1998 to have Y-DNA that matched that of the Jefferson male line. Jefferson's only known male descendants were the three Hemings sons.

Along the Gulf Coast in Latin colonies, there arose an elite class of free people of color, descendants originally of African women and European colonists, especially in New Orleans, Savannah and Charleston. Many of these Creoles of color married among their own class, became educated and owned property; some held slaves of their own.[8]

In the two decades after the Revolution, numerous slaveholders in the Upper South were moved by its ideals to free their slaves ("manumission"), so that the percentage of free blacks rose from less than one percent in 1780 to more than 10 percent by 1810. In Virginia, 7.2 percent of the population were free blacks by 1810. In Delaware, three quarters of the blacks were free by 1810.[9] Soon, the demand for slave labor increased as cotton cultivation expanded, and manumissions dropped markedly. Virginia and other state legislatures in the early nineteenth century made manumissions more difficult to obtain.

The author Mary Chesnut wrote of her South Carolina society at the time of the Civil War,

This only I see: like the patriarchs of old our men live all in one house with their wives and their concubines, the Mulattoes one sees in every family exactly resemble the white children—every lady tells you who is the father of all the Mulatto children in every body's household, but those in her own, she seems to think drop from the clouds or pretends so to think ...[10]

Fanny Kemble, an English actress married to an American planter in the antebellum era, wrote about what she saw as the disgrace of elite white fathers abandoning their mixed-race children in her Journal of a Residence on a Georgia Plantation in 1838-1839.[11] She did not publish the book until 1863.

In the antebellum years, not all white fathers abandoned their children by slave or free black mistresses. Some lived in common-law relationships with slave women, protecting them and their children by manumission when possible, by passing on property to them, or by arranging apprenticeships or education for the children, and sometimes settlement in the North. Some wealthy planters paid to have their mixed-race children educated in the North, in colleges such as Oberlin, which was open to all races. For example, by 1860, most of the 200 subscription students at Wilberforce University in southern Ohio, established in 1855 by the Methodist and African Methodist Episcopal churches for the education of black youths, were mixed-race, "natural" sons, whose education was paid for by their wealthy Southern planter fathers.[12] These were exceptions to the many mixed-race children who were abandoned.

Educated free people of color often became leaders of the abolitionist movement, such as Robert Purvis in Philadelphia, and the brothers Charles Henry and John Mercer Langston, who continued their leadership in the post-Civil War years in Kansas and Virginia, respectively.[citation needed]

Retrieved from "https://en.wikipedia.org/w/index.php?title=Partus_sequitur_ventrem&oldid=967105232"
Categories:
Hidden categories:
The article is a derivative under the Creative Commons Attribution-ShareAlike License. A link to the original article can be found here and attribution parties here. By using this site, you agree to the Terms of Use. Gpedia Ⓡ is a registered trademark of the Cyberajah Pty Ltd.