Philip Livingston (January 15, 1716 – June 12, 1778) was an American merchant and statesman from New York City. He represented New York at the October 1774 First Continental Congress, where he favored imposing economic sanctions upon Great Britain as a way of pressuring the British Parliament to repeal the Intolerable Acts.[1] He was also a delegate to the Second Continental Congress from 1775 to 1778, and signed the Declaration of Independence.[2]

Philip Livingston born in Albany, New York, on January 15, 1716,[3] the fourth surviving son of Philip Livingston (1686–1749), 2nd Lord of the Manor and Catherine Van Brugh Livingston, the daughter of Albany, New York, Mayor Pieter Van Brugh. Along with his brother, William Livingston (1723–1790), he grew up in the Albany area, dividing his time between his father’s Albany Townhouse and the Manor House in Linlithgo, at the junction of the Roeliff Jansen Kill and the Hudson River.[4]

Philip graduated from Yale College in 1737,[5] and returned to Albany to serve a mercantile apprenticeship with his father. Through his father's influence, he also obtained clerkships in Albany's local government.[6] He then settled in New York City and pursued a career in the import business, trading with the British sugar islands in the West Indies. During King George's War (1744–1748), Livingston made his fortune provisioning and privateering. He also speculated heavily in real estate and the slave trade. He had a stone townhouse on Duke Street in Manhattan and also a forty-acre estate in Brooklyn Heights. He became a merchant and served as an Alderman of the East Ward from 1754 through 1762.[3]

Livingston was a promoter of the founding of Kings College and helped to organize the New York Public Library in 1754. Livingston founded the first Chamber of Commerce in 1770, and in 1756 was president and founding member of the St. Andrew's Society, New York's first benevolent organization.[6] He was also one of the first governors of New York Hospital.[citation needed] 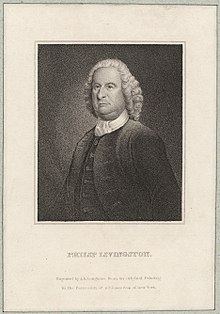 Also in 1754, he went as a delegate to the Albany Congress. There, he joined delegates from several other colonies to negotiate with Indians and discuss common plans for dealing with the French and Indian War (1754–1763). Livingston became an active promoter of efforts to raise and fund troops for the war. According to Cynthia A. Kiemer, he owned shares in six privateers, making him one of the colony's leading investors.[6]

He served as a member of the provincial house of representatives from 1763 to 1769 and in 1768 served as Speaker.[3] In October 1765, he attended the Stamp Act Congress, which produced the first formal protest to the crown as a prelude to the American Revolution. He joined New York City's Committee of Correspondence to continue communication with leaders in the other colonies, and New York City's Committee of Sixty.[2]

When New York established the New York Provincial Congress in 1775, he was the President. He was selected as one of the delegates to the Continental Congress.[7] His brother William, a prominent lawyer in New Jersey, was also a delegate to the Continental Congress from 1774 to June 1776. In July 1775, Philip signed the Olive Branch Petition, a final attempt to achieve an understanding with the Crown. Like many of the early patriots, he initially did not advocate a complete break from the mother country but eventually aligned himself with the opposition to the measures the British were imposing on the colonists. When the British occupied New York City, Philip and his family fled to Kingston, New York where he maintained another residence.[2]

After the Battle of Long Island, Washington and his officers met at Philip’s residence in Brooklyn Heights and decided to evacuate the island. The British subsequently used Philip’s Duke Street home as a barracks, and his Brooklyn Heights residence as a Royal Navy hospital.[2]

After the adoption of the new New York State Constitution, he was appointed to the New York State Senate southern district in 1777, while continuing to sit in the Continental Congress.[8] Livingston suffered from dropsy and his health deteriorated in 1778.[6]

Livingston, who suffered from dropsy,[6] died suddenly while attending the sixth session of Congress in York, Pennsylvania,[7] and is buried in the Prospect Hill Cemetery there. Livingston was a Presbyterian, and a Mason.[14] When Livingston died, his estate was insufficient to meet his debts, and his executors renounced the administration of the estate. On February 25, 1785, the New York Legislature passed an act, entitled An Act for vesting the Estate of Philip Livingston, late of the City of New-York, Esquire, deceased, in Trustees for the Payment of his Debts, and other Purposes therein mentioned,[13] which named his son and heir, Philip Philip Livingston, Isaac Roosevelt (1726–1794), and Robert C. Livingston (1742–1794), his nephew who was a son of Robert Livingston, 3rd Lord of the Manor. As the newly named trustees, they were responsible for administering Livingston’s "property, pay all debts, and discharge the pecuniary legacies."[13] After his son's death in 1788, Rev. John Henry Livingston, Thomas Jones, both his sons-in-law, Henry Brockholst Livingston, his nephew, and Alexander Hamilton were appointed the executors of his will.[13]

Through his son Philip, the only of his sons to have children, he was the grandfather of Philip Henry Livingston (1769–1831) and Edward Philip Livingston (1779–1843), the Lieutenant Governor of New York.[11]

Livingston Avenue and the former Philip Livingston Magnet Academy, both in Albany, New York, are named for him.[6] A public school in Brooklyn, PS 261 in Boerum Hill, is named for him.[citation needed]

Retrieved from "https://en.wikipedia.org/w/index.php?title=Philip_Livingston&oldid=960960557"
Categories:
Hidden categories:
The article is a derivative under the Creative Commons Attribution-ShareAlike License. A link to the original article can be found here and attribution parties here. By using this site, you agree to the Terms of Use. Gpedia Ⓡ is a registered trademark of the Cyberajah Pty Ltd.