The Piedmont Triad (or simply the Triad) is a north-central region of the U.S. state of North Carolina that consists of the area within and surrounding the three major parts: Greensboro, Winston-Salem, and High Point. This close group of cities lies in the Piedmont geographical region of the United States and forms the basis of the Greensboro–Winston-Salem–High Point Combined Statistical Area. As of 2012, the Piedmont Triad has an estimated population of 1,611,243 making it the 33rd largest combined statistical area in the United States.[1]

The metropolitan area is connected by Interstates 40, 85, 73, and 74 and is served by the Piedmont Triad International Airport. Long known as one of the primary manufacturing and transportation hubs of the southeastern United States, the Triad is also an important educational and cultural region and occupies a prominent place in the history of the American Civil Rights Movement.[2]

The Triad is not to be confused with the "Triangle" region (Raleigh–Durham–Chapel Hill), directly to the east.

The name in italics is the county in which the city is located. 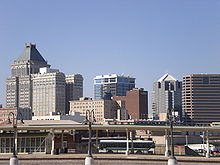 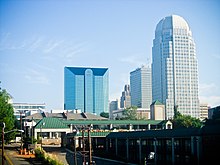 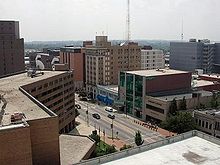 Secondary cities over 10,000 in population

Other municipalities under 10,000 in population

The area is served by the Winston-Salem/Forsyth County Schools and Guilford County Schools. The area is home to a number of religious schools, as well as a number of independent schools including Wesleyan Christian Academy and High Point Christian Academy in High Point, Summit School in Winston-Salem, Forsyth Country Day School in Lewisville, Greensboro Day School and Greensboro Montessori School in Greensboro.

More than twenty institutions of higher education are located within the Triad, including: 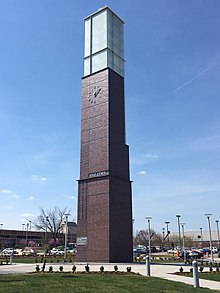 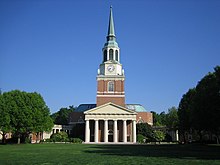 Major art and historical museums contribute to the cultural climate of the region, including the Southeastern Center for Contemporary Art (SECCA), The Reynolda House Museum of American Art, Old Salem, High Point Historical Museum, Mendenhall Plantation, the Weatherspoon Museum of Modern Art (located on the campus of UNCG), Blandwood Mansion and Gardens, the Greensboro Historical Museum, Guilford Battleground National Military Park, and the Charlotte Hawkins Brown State Museum. The area also has its fair share of scientific museums, such as SciWorks, the International Civil Rights Center and Museum, the Wake Forest Museum of Anthropology, and the Greensboro Science Center. The North Carolina Zoo, the world's largest open-air natural habitat zoo, is located just outside the Randoph County city of Asheboro.

The economy in the Piedmont Triad is a mixed economy.[citation needed]

The Triad area is notable for large textile, tobacco, and furniture corporations. The Triad remains a national center for textile manufacturing, represented by corporations including Hanes based in Winston-Salem, and International Textile Group, based in Greensboro. Tobacco remains a prominent crop in the Triad's rural areas and many tobacco companies like Lorillard Tobacco Company of Greensboro, and Reynolds American, based in Winston-Salem, call the Piedmont Triad home. Numerous furniture manufacturers are also headquartered in the Triad area, especially in the cities of High Point (deemed the "Furniture Capital of the World"), Thomasville (known as the "Chair City"), and Lexington. The furniture and textile industries have in turn spawned large trucking, logistics, and warehousing businesses in the area. Popular brands like "Thomasville" and "Lexington" are derived from the names of these cities. Recently, however, many furniture and tobacco factories have been closing and/or laying off workers across the region in response to escalating industrial globalization.

After many of the old industries in the area began to die out, many Piedmont Triad cities began encouraging technological businesses to move into the Triad. Winston-Salem, for instance, founded within its downtown the Piedmont Triad Research Park, now known as Wake Forest Innovation Quarter, a highly interactive, 200-acre, master-planned innovation community developed to support life science and information technology research and development. Dell, Inc. in the early 2000s struck a deal with local officials allowing for the construction of a new computer assembly plant near the Triad city of Kernersville. Dell pulled out of its contract with the city, however, and left after only a few years. Additionally, the University of North Carolina at Greensboro, the largest institution of higher learning in the region, and North Carolina A&T State University have joined forces to establish the Gateway University Research Park, a technology-based entity that will focus its efforts on a host of biological, life, and environmental science research projects. Upon full build out of the project, it is expected to be housed by two 75-acre (300,000 m2) campuses, employ approximately 2,000 people, and generate $50 million per year to the Triad economy. LabCorp, one of the largest clinical laboratories in the world, has its corporate headquarters and several of its testing facilities in Burlington.

The following are the most prominent regional shopping centers/malls in the Piedmont Triad region: 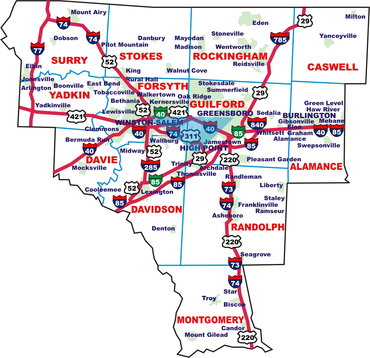 Major roads and cities in the Piedmont Triad and two other nearby counties. The blue triangle represents the three points of the "Triad".

The Triad is home to an extensive freeway network, which is in the process of undergoing a major expansion. Four major Interstate highways and numerous secondary Interstate routes and US routes serve the region:

Piedmont Authority for Regional Transportation (PART) is the Triad's 10-county regional organization with the goal of enhancing all forms of transportation through regional cooperation. PART Express Bus provides express service to each major Triad city from Piedmont Triad International Airport, while Connections Express connects the Triad to Duke and UNC Medical Centers. PART also has Express Bus service to outlying counties that surround the Triad including Surry, Stokes, Davidson, Yadkin, and Randolph Counties and soon to be Davie County. PART is also administering and developing several rail service studies that include both commuter and intercity rail.

The Piedmont Triad has several protected areas, which lay entirely or partly in the region:

The following are prominent newspapers in the Piedmont Triad region and the counties each newspaper covers.

All of the Piedmont Triad region belongs to the Greensboro/Winston-Salem/High Point television designated market area (DMA). The following are stations that broadcast to this DMA. These stations are listed by call letters, virtual channel number, network and city of license.

Retrieved from "https://en.wikipedia.org/w/index.php?title=Piedmont_Triad&oldid=957314227"
Categories:
Hidden categories:
The article is a derivative under the Creative Commons Attribution-ShareAlike License. A link to the original article can be found here and attribution parties here. By using this site, you agree to the Terms of Use. Gpedia Ⓡ is a registered trademark of the Cyberajah Pty Ltd.