Shortcut
The United States of America is a federal republic of 50 states, a capital district, and a number of other territories. It is located mostly in central North America. The U.S. has three land borders, two with Canada and one with Mexico, and is otherwise bounded by the Pacific Ocean, the Bering Sea, the Arctic Ocean and the Atlantic Ocean. Of the 50 states, only Alaska and Hawaii are not contiguous with any other state. The U.S. also has a collection of districts, territories, and possessions around the world. Each state has a high level of local autonomy according to the system of federalism. The U.S. traces its national origin to the declaration by 13 British colonies in 1776 that they were free and independent states. They were recognized as such by the Treaty of Paris in 1783. Since then, the nation has grown to become a global superpower and exerts a high level of economic, political, military, and cultural influence.

More about… the United States, its history and diversity
Refresh with new selections below (purge)
edit

The Panic of 1907 was a financial crisis that occurred in the United States when its stock market fell close to 50 percent from its peak the previous year. Primary causes of the run included a retraction of market liquidity by a number of New York City banks, a loss of confidence among depositors, and the absence of a statutory lender of last resort. The crisis occurred after the failure of an attempt in October 1907 to corner the market on stock of the United Copper Company. When this bid failed, banks that had lent money to the cornering scheme suffered runs which later spread to affiliated banks and trusts, leading a week later to the downfall of the Knickerbocker Trust Company—New York City's third-largest trust. The collapse of the Knickerbocker spread fear throughout the city's trusts as regional banks withdrew reserves from New York City banks. The panic would have deepened if not for the intervention of financier J.P. Morgan, who pledged large sums of his own money, and convinced other New York bankers to do the same, to shore up the banking system. By November the contagion had largely ended. The following year, Senator Nelson W. Aldrich established and chaired a commission to investigate the crisis and propose future solutions, leading to the creation of the Federal Reserve System.
edit

Edwin Taylor Pollock (1870–1943) was a career officer in the United States Navy, serving in both the Spanish–American War and World War I. As a young ensign, Pollock served on board USS New York during the Spanish–American War. After the war, he gradually rose through the ranks and served on many ships, including conducting important research into wireless communication. Less than a week before World War I, he won a race against a fellow officer to be the one to officially sign over the U.S. Virgin Islands from Denmark and serve as the territory's first acting-governor. During the war, he was promoted to captain and successfully transferred 60,000 American soldiers to France, for which he was awarded a Navy Cross. Subsequently, he was made the eighth Naval Governor of American Samoa and then the superintendent of the United States Naval Observatory, before retiring in 1927.
edit 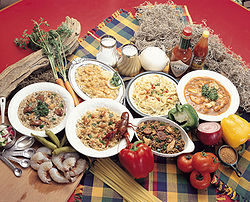 An animated map of U.S. states by date of statehood.
edit

New York State Route 22 (NY 22) is a north–south state highway in eastern New York in the United States. It runs parallel to the state's eastern edge from the outskirts of New York City to a short distance south of the Canada–US border. At 341 miles (549 km), it is the state's longest north–south route and the third longest overall, after NY 5 and NY 17.[a] Many of the state's major east–west roads intersect with Route 22 just before crossing the state line into the neighboring New England states.

The southernmost section of the road was known as the White Plains Post Road in the eighteenth and nineteenth centuries, a major highway connecting New York City to White Plains, the Westchester county seat. Route 22 in its modern form was established in 1930 as one of the principal routes from New York City to Canada.

Roman Vishniac was a renowned Russian-American photographer, best known for capturing on film the culture of Jews in Central and Eastern Europe before the Holocaust.

Vishniac was an extremely diverse photographer, an accomplished biologist and a knowledgeable collector and teacher of art history. Throughout his life, he made significant scientific contributions to the fields of photomicroscopy and time-lapse photography. Vishniac was very interested in history, especially that of his ancestors. In turn, he was strongly tied to his Jewish roots and was a Zionist later in life.

Roman Vishniac won international acclaim for his photography: his pictures from the shtetlach and Jewish ghettos, celebrity portraits, and images of microscopic biology. He is known for his book A Vanished World, published in 1983, which was one of the first such pictorial documentations of Jewish culture in Eastern Europe from that period and also for his extreme humanism, respect and awe for life, sentiments that can be seen in all aspects of his work.

Retrieved from "https://en.wikipedia.org/w/index.php?title=Portal:United_States&oldid=983744372"
Categories:
Hidden categories:
The article is a derivative under the Creative Commons Attribution-ShareAlike License. A link to the original article can be found here and attribution parties here. By using this site, you agree to the Terms of Use. Gpedia Ⓡ is a registered trademark of the Cyberajah Pty Ltd.