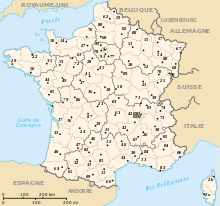 A prefecture in France (French: préfecture) may refer to:

Role of the prefecture

There are 101 prefectures in France, one for each department. The official in charge is the prefect (French: préfet). The prefecture is an administration that belongs to the Ministry of the Interior, and is therefore in charge of the delivery of identity cards, driving licenses, passports, residency and work permits for foreigners, vehicle registration, registration of associations (creation, status modification, dissolution), and of the management of the police and firefighters.

Prefectures are located near the geographic centre of their departments, and were originally chosen for being within a day's travel on horseback from anywhere in the department. Therefore, the largest settlement in a department may not always be its prefecture: the department of Marne, for example, has its prefecture at Châlons-en-Champagne despite the city of Reims, near the Aisne border, being four times its size.

The prefect represents the national government at the local level and as such exercises the powers that are constitutionally attributed to the national government. The prefect issues ordinances written for the application of local law: to close a building that does not conform to safety codes, or modify vehicular traffic regulations (speed limit, construction permits).

There is an exception in Paris (Île-de-France) and its three surrounding departments (Petite Couronne). These departments are administered by a single prefecture for law enforcement and security purposes, called the Prefecture of Police (French: préfecture de police), a situation inherited from the Paris Commune of 1871. The power of law enforcement is usually invested in the mayor in other French communes. The other powers are held by the prefect of Paris.

Retrieved from "https://en.wikipedia.org/w/index.php?title=Prefectures_in_France&oldid=964736598"
Categories:
Hidden categories:
The article is a derivative under the Creative Commons Attribution-ShareAlike License. A link to the original article can be found here and attribution parties here. By using this site, you agree to the Terms of Use. Gpedia Ⓡ is a registered trademark of the Cyberajah Pty Ltd.