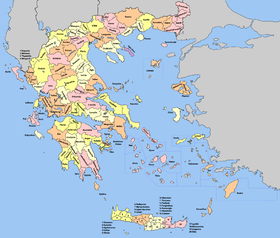 Map with the provinces (eparchies) of Greece.

The provinces of Greece (Greek: επαρχία, "eparchy") were sub-divisions of some the country's prefectures. From 1887, the provinces were abolished as actual administrative units, but were retained for some state services, especially finance services and education, as well as for electoral purposes. Before the Second World War, there were 139 provinces, and after the war, with the addition of the Dodecanese Islands, their number grew to 147. According to the Article 7 of the Code of Prefectural Self-Government (Presidential Decree 30/1996), the provinces constituted a "particular administrative district" within the wider "administrative district" of the prefectures. The provinces were finally abolished after the 2006 local elections, in line with Law 2539/1997, as part of the wide-ranging administrative reform known as the "Kapodistrias Project", and replaced by enlarged municipalities (demoi).

This is a list of the former provinces of Greece and their capitals, sorted by prefecture, as they stood in 1991:[1]

Retrieved from "https://en.wikipedia.org/w/index.php?title=Provinces_of_Greece&oldid=932930090"
Categories:
Hidden categories:
The article is a derivative under the Creative Commons Attribution-ShareAlike License. A link to the original article can be found here and attribution parties here. By using this site, you agree to the Terms of Use. Gpedia Ⓡ is a registered trademark of the Cyberajah Pty Ltd.