During the American Civil War, Semmes was captain of the cruiser CSS Alabama, the most successful commerce raider in maritime history, taking 65 prizes. Late in the war, he was promoted to rear admiral and also acted briefly as a brigadier general in the Confederate States Army. His appointment or arrangement to act as a temporary brigadier general from April 5 to April 26, 1865, was never submitted to or officially confirmed by the Confederate Senate.[citation needed]

He graduated from Charlotte Hall Military Academy[1] and entered the U.S. Navy as a midshipman in 1826. Semmes then studied law and was admitted to the bar. He was promoted to lieutenant in February 1837.[2]

During the Mexican–American War, he commanded the USS Somers in the Gulf of Mexico. In December 1846 a squall hit the ship while under full sail in pursuit of a vessel off Veracruz. Somers capsized and was lost along with 37 sailors. Semmes then served as first lieutenant on the USS Raritan, accompanied the landing force at Veracruz, and was dispatched inland to catch up with the army proceeding to Mexico City.[3]

Following the war, Semmes went on extended leave at Mobile, Alabama, where he practiced law and wrote Service Afloat and Ashore During the Mexican War.[4] He became extremely popular, and the nearby town of Semmes, Alabama was named after him. Semmes also maintained a home in Josephine, Alabama on Perdido Bay.[5] He was promoted to the rank of commander in 1855 and was assigned to lighthouse duties until 1860. Following Alabama's secession from the Union, Semmes was offered a Confederate naval appointment by the provisional government; he resigned from the U.S. Navy the next day, February 15, 1861.[6]

See also: Blockade runners of the American Civil War and Battle of Cherbourg (1864)

After appointment to the Confederate Navy as a commander and a futile assignment to purchase arms in the North, Semmes was sent to New Orleans to convert the steamer Habana into the cruiser/commerce raider CSS Sumter.[7] In June 1861, Semmes, in Sumter, outran the USS Brooklyn, breaching the Union blockade of New Orleans, and then launched a brilliant career as one of the greatest commerce raider captains in naval history.[8]

Semmes's command of CSS Sumter lasted only six months, but during that time he ranged wide, raiding U.S. commercial shipping in both the Caribbean Sea and Atlantic Ocean; his actions accounted for the loss of 18 merchant vessels, while always eluding pursuit by Union warships. By January 1862, Sumter required a major overhaul. Semmes's crew surveyed the vessel while in neutral Gibraltar and determined that the repairs to her boilers were too extensive to be completed there. Semmes paid off the crew and laid up the vessel.[9] U.S. Navy vessels maintained a vigil outside the harbor until she was disarmed and sold at auction in December 1862, eventually being renamed and converted to a blockade runner.[10]

Semmes and several of his officers traveled to England where he was promoted to captain. He then was ordered to the Azores to take up command and oversee the coaling and outfitting with cannon of the newly built British steamer Enrica as a sloop-of-war, which thereafter became the Confederate commerce raider CSS Alabama. Semmes sailed on Alabama from August 1862 to June 1864. His operations carried him from the Atlantic to the Gulf of Mexico, around Africa's Cape of Good Hope, and into the Pacific to the East Indies. During this cruise, Alabama captured 65 U.S. merchantmen and quickly destroyed the USS Hatteras, off Galveston.[11] 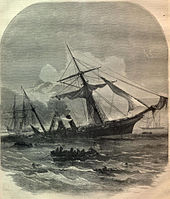 1864 engraving of the sinking of CSS Alabama

Alabama finally sailed back to the Atlantic and made port in Cherbourg, France, for a much-needed overhaul; she was soon blockaded by the pursuing Union steam sloop-of-war, USS Kearsarge. Captain Semmes took Alabama out on June 19, 1864, and met the similar Kearsarge in one of the most famous naval engagements of the Civil War.

The commander of Kearsarge had, while in port at the Azores the year before, turned his warship into a makeshift partial ironclad; 30 feet (9.1 m) of the ship's port and starboard midsection were stepped-up-and-down to the waterline with overlapping rows of heavy chain armor, hidden behind black wooden plank covers.[12] Alabama's much-too-rapid gunnery and misplaced aim, combined with the deteriorated state of her gunpowder and shell fuses, enabled a victory for both of Kearsarge's 11-inch (28 cm) Dahlgren smoothbore cannon. While Alabama opened fire at long range, Kearsarge steamed straight at her, exposing the Union sloop-of-war to potentially devastating raking fire. In their haste, however, Alabama's gunners fired many shells too high.

At 1,000 yards (910 m), Kearsarge turned broadside to engage with deliberate fire. Soon the heavy 11-inch (28 cm) cannon began to find their mark.[12] After receiving a fatal Dahlgren shell to the starboard waterline, which tore open a portion of Alabama's hull, causing her steam engine to explode from the shell's impact, Semmes was forced to order the striking of his ship's Stainless Banner battle ensign and later to display a hand-held white flag of surrender to finally halt the combat.

As the commerce raider was going down by the stern, Kearsarge stood off at a distance and observed at the orders of her captain (John Ancrum Winslow); Winslow eventually sent rescue boats for survivors after taking aboard Alabama survivors from one of the raider's two surviving longboats. As his command sank, the wounded Semmes threw his sword into the sea, depriving Kearsarge's Captain Winslow of the traditional surrender ceremony of having it handed over to him as victor. Semmes was eventually rescued, along with forty-one of his crewmen,[13] by the British yacht Deerhound and three French pilot boats. He and the forty-one were then taken to England where all but one recovered; while there they were hailed as naval heroes, despite the loss of Alabama[14]

From England, Semmes made his way back to America via Cuba and from there a safe shore landing on the Texas gulf coast; it took his small party many weeks of journeying through the war-devastated South before he was finally able to make his way to the Confederate capital. He was promoted to rear admiral in February 1865, and during the last months of the war he commanded the James River Squadron from his flagship, the heavily armored ironclad CSS Virginia II.

With the fall of Richmond, in April 1865, Semmes supervised the destruction of all the squadron's nearby warships and was then acted as a brigadier general in the Confederate States Army with the implication that he was appointed to that grade.[15] Historians John and David Eicher show Semmes as appointed to the grade of temporary brigadier general (unconfirmed) on April 5, 1865.[16]

Semmes's appointment as a brigadier general was at most an informal arrangement made four days before General Robert E. Lee's surrender of the Army of Northern Virginia at the Battle of Appomattox Courthouse on April 9, 1865. That appointment was not and could not have been submitted to or confirmed by the Confederate Senate, since the Second Confederate Congress adjourned for the last time on March 18, 1865.[15] Historian Bruce Allardice notes that Semmes was vague about this appointment in his memoirs and considered his naval rank to be the equivalent of a brigadier general.[15]

After the destruction of the naval squadron, Semmes's sailors were turned into an infantry unit and dubbed the "Naval Brigade." Semmes was then placed in command; Semmes intention for the brigade was to join Lee's army after burning their vessels. Lee's army, however, was already cut off from Richmond, so most of Semmes's men boarded a train and escaped to join General Joseph E. Johnston's army in North Carolina.[17] A few men of the Naval Brigade were able to join with Lee's rear guard and fought at the Battle of Sailor's Creek.

Semmes and the Naval Brigade were surrendered to Union Major General William T. Sherman with Johnston's army at Bennett Place near Durham Station, North Carolina, on April 26, 1865, and subsequently were paroled on May 1, 1865.[16] Semmes's parole notes that he held commissions as both a brigadier general and rear admiral in the Confederate service when he surrendered with General Johnston's army.[15][18] He insisted on his parole being written to include the brigadier general commission in anticipation of being charged with piracy by the United States government.[15][18][19]

The U.S. briefly held Semmes as a prisoner after the war, but released him on parole, then later arrested him for treason on December 15, 1865. After a good deal of behind-the-scenes political machinations, all charges were eventually dropped, and he was finally released on April 7, 1866. After his release, Semmes worked as a professor of philosophy and literature at Louisiana State Seminary (now Louisiana State University), as a county judge, and then as a newspaper editor; his controversial military service always played a part in forcing his job changes. Semmes later returned to Mobile and resumed his legal career.

In October 1866 the Louisiana State Seminary offered Semmes a position as Professor of Moral Philosophy and English Literature. The position paid $3,000 per year. Semmes assumed this role on January 1, 1867. His fellow faculty-members described him as "dignified and easy to talk with". His teaching method in classes incorporated mainly formal lectures, with very little discussion. In May 1867 Semmes resigned from academia to take over as editor of a newspaper, the Memphis Bulletin.

He defended both his actions at sea and the political actions of the southern states in his 1869 Memoirs of Service Afloat During The War Between the States.[20] The book was viewed[by whom?] as one of the most cogent but bitter defenses written about the South's "Lost Cause".[21] In 1871 the citizens of Mobile presented Semmes with what became known as the Raphael Semmes House, and it remained his residence until his untimely death in 1877 from complications that followed food poisoning from eating contaminated shrimp. Semmes was then interred in Mobile's Old Catholic Cemetery.[16]

Semmes is a member of the Alabama Hall of Fame. One of the streets on the current Louisiana State University campus once carried his full name in his honor,[22] as does Semmes Avenue in Richmond, Virginia.[23] There was a life-sized statue of Admiral Semmes in Mobile, but it was taken down early in the morning on June 5, 2020.[24] A suburban area of western Mobile County is named for him, as well as a hotel in downtown Mobile named The Admiral Hotel.[citation needed]

The Alabama Department of Archives and History has among its collection a Confederate naval battle ensign listed as "Admiral Semmes' Flag, Catalogue No. 86.1893.1 (PN10149-10150)". Their provenance reconstruction shows that it was presented to Semmes in England sometime after the sinking of the Alabama by "Lady Dehogton and other English ladies".[25]

When Semmes returned to the South from England, he brought this ceremonial Stainless Banner with him. It was inherited by his grandchildren, Raphael Semmes III and Mrs. Eunice Semmes Thorington. After his sister's death, Raphael Semmes III donated the ensign to the state of Alabama on September 19, 1929.[26]

Retrieved from "https://en.wikipedia.org/w/index.php?title=Raphael_Semmes&oldid=968496813"
Categories:
Hidden categories:
The article is a derivative under the Creative Commons Attribution-ShareAlike License. A link to the original article can be found here and attribution parties here. By using this site, you agree to the Terms of Use. Gpedia Ⓡ is a registered trademark of the Cyberajah Pty Ltd.