The Reserve Officers' Training Corps (ROTC) is a group of college and university-based officer training programs for training commissioned officers of the United States Armed Forces.[1][2][3]

While ROTC graduate officers serve in all branches of the U.S. military, the U.S. Marine Corps and the U.S. Coast Guard do not have their own respective ROTC programs, but graduates of Naval ROTC programs have the option to serve as officers in the Marine Corps contingent on meeting Marine Corps requirements.[4] The Coast Guard has no ROTC program[5] and its officers can only be commissioned via the U.S. Coast Guard Academy, Coast Guard Officer Candidate School, interservice transfer from another U.S. military service following completion of at least 4 years commissioned service in that other branch of the U.S. military (e.g. such as interservice transfers for officers designated as Army Aviators, USN and USMC Naval Aviators and USAF Pilots), or via the Coast Guard College Student Pre-Commissioning Initiative (CSPI), although the CSPI program is only available at colleges and universities designated as a Minority Serving Institute (MSI) or with a student population of at least 50% minorities for the past three years.[6][7]

Army ROTC units are organized as brigades, battalions and companies. Air Force ROTC units are detachments with the students organized into wings, groups, squadrons and flights. Army and Air Force ROTC students are referred to as cadets. Naval ROTC units are organized as battalions and also include NROTC students under "Marine Option" who will eventually be commissioned as officers in the Marine Corps. Marine NROTC students may be formed in a separate company when the program includes sufficient numbers. All Naval ROTC students are referred to as midshipmen. Some of the summer training that is offered to cadets in the Army ROTC program are: Airborne, Air Assault, Mountain Warfare, WHINSEC and other related schools. In addition to their mandatory pre-commissioning Field Training (FT) at Maxwell AFB, Alabama (4 weeks for 4-year program cadets; 6 weeks for 2-year program cadets), Air Force ROTC cadets are also eligible for Airborne training under the tutelage of the Army at Fort Benning, Georgia. Naval ROTC midshipmen will participate in summer cruise programs every summer, either afloat or ashore, similar to their U.S. Naval Academy midshipmen counterparts.

ROTC at the University of Florida during the 1920s

The concept of ROTC in the United States was created by Alden Partridge and began with the Morrill Act of 1862 which established the land-grant colleges. Part of the federal government's requirement for these schools was that they include military tactics as part of their curriculum, forming what became known as ROTC. The college from which ROTC originated is Norwich University in Northfield, Vermont. Norwich was founded in 1819 at Norwich, Vermont as the American Literary, Scientific and Military Academy.[9] The university was founded by former West Point instructor Captain Alden Partridge, who promoted the idea of a "citizen soldier"—a man trained to act in a military capacity when his nation required, but capable of fulfilling standard civilian functions in peacetime.[10] This idea eventually led to the formation of Reservist and National Guard units with regimented training in place of local militia forces.

Another root of the modern ROTC program comes from the "Plattsburg Idea". In 1915, Major General Leonard Wood instituted the Citizen's Military Training Corps, the first series of training camps to make officers out of civilians. For the first time in history, an attempt was made to provide a condensed course of training and commissioning competent reserve line officers after only a summer of military training. Over 5,000 men arrived at Plattsburgh in May 1917 for the first of the large training corps. By the end of 1917, over 17,000 men had been trained. By the eve of its entry into World War One, the U.S. had a prepared corps of officers including one of the earliest Plattsburgh graduates, Theodore Roosevelt Jr. During the 1930s, there were ROTC programs in some larger city high schools (Memphis, TN; Charlotte, NC; Kansas City, MO; New Orleans, LA).[11][12] 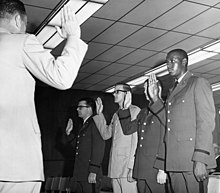 Until the 1960s, many major universities required compulsory ROTC for all of their male students. However, because of the protests that culminated in the opposition to U.S. involvement in the Vietnam War, compulsory ROTC was dropped in favor of voluntary programs.[13] In some places ROTC was expelled from campus altogether, although it was always possible to participate in off-campus ROTC.[14]

In the 21st century, the debate often focused around the Congressional don't ask, don't tell law, signed into law by President Bill Clinton in 1993 and in force until 2011, which forbade homosexuals serving in the United States military from disclosing their sexual orientation at the risk of expulsion. Some schools believed this legal mandate would require them to waive or amend their non-discrimination policies.

In recent years, concerted efforts are being made at some Ivy League universities that have previously banned ROTC (including Columbia) to return ROTC to campus.[16] The Harvard ROTC program was reinstated effective March 4, 2011 following enactment of the Don't Ask, Don't Tell Repeal Act of 2010.

Under current law, there are three types of ROTC programs administered, each with a different element.[17] 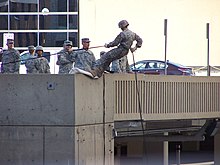 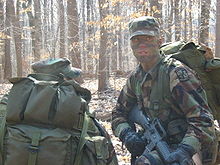 Army ROTC cadets on a field training exercise in March 2005

The Army Reserve Officer Training Corps (AROTC) program is the largest branch of ROTC, as the Army is the largest branch of the military. There are over 20,000 ROTC cadets in 273 ROTC programs at major universities throughout the United States. These schools are categorized as Military Colleges (MC), Military Junior Colleges (MJC) and Civilian Colleges (CC).[20][21] Army ROTC provides the majority of the Army's officer corps; the remainder comes from West Point, Officer Candidate School (OCS), or direct commissions.

AROTC offers scholarships based on the time of enrollment in the program. Newly graduated seniors in high school can enter the program with a full four-year scholarship while college students can enroll later and earn a scholarship that would cover the remainder of their college career.

The applicant must agree to accept a commission and serve in the Army on Active Duty or in a Reserve Component (U.S. Army Reserve or Army National Guard).

The two-and-a-half-year scholarship is available for students already enrolled in a college or university with three academic years remaining.

Once an applicant has shown interest in the AROTC program the cadre can select him for a scholarship if he/she excels in the three major pillars:

Prior to 2015, a cadet had to have passed LDAC between their summer of becoming a senior. LDAC (Leadership Developmental and Assessment Course) was held at Fort Lewis, Washington until its final year at Fort Knox, Kentucky, where each cadet would be evaluated on leadership skills. The course was set up for a month of training with other peers and evaluated by prior servicemen.[22]

From 2015, cadets attend Advanced Camp between their junior and senior year at Fort Knox, Kentucky. For 2015 and 2016, the training was not evaluated and simply pass/no pass beginning in 2017 Advanced Camp will become evaluated again. Cadet Summer Training (CST), including Advanced Camp and basic camp, is the U.S. Army's largest training event.

The Naval Reserve Officer Training Corps (NROTC) program was founded in 1926 and the U.S. Marine Corps joined the program in 1932. The naval NROTC program is offered at over 150 colleges nationwide. The Nation's first Marine Corps oriented NROTC was established at The Citadel in 1970.[23]

The Solomon Amendment denies federal funding to any university with a "policy or practice" that prevents the military from "maintaining, establishing or operating" ROTC on its campus. Such universities are allowed to require that ROTC adhere to the same policies as the university's other academic programs. According to Diane Mazur of the Palm Center, the military has withdrawn ROTC from a number of universities rather than adapt to those policies or accept extracurricular status. In her analysis, both the military and academe (as of the fall of 2010) preferred not to dispute the public perception that elite universities had banned ROTC programs. She wrote:[24]

The military may be more comfortable when it retreats to parts of the country ... where universities don't ask a lot of questions .... [C]olleges may also be more comfortable when they go along with the fiction of banning ROTC, because then they don't have to answer to people upset about "don't ask, don't tell." Everyone buys into the myth, but at the expense of military readiness. The military needs to return to the colleges it walked away from, and everyone needs to stop pretending that ROTC programs ended because of a ban.

Others argue that universities effectively ban ROTC by erecting procedural hurdles motivated by anti-military sentiment and objections to discrimination based on sexual orientation that only serve to "discourage their own presumably egalitarian, intelligent, and enlightened students from joining".[25]

ROTC programs were subject to the military's ban on service by open gays and lesbians known as "Don't ask don't tell". LGBT students occasionally protested ROTC as a proxy for the policy.[26][27] An act to repeal the policy was signed by President Barack Obama on December 22, 2010 and implementation took effect September 20, 2011.

Other national armed forces in countries with strong historical ties to the United States have ROTC programs.

During World War I, the United States created the Student Army Training Corps in an effort to encourage young men to receive both a college education and train for the military simultaneously. Those young men who did exceptionally well in the SATC classes were recommended for classes in the ROTC.

On February 10, 1918, the War Department created the Committee on Education and Special Training. The purpose of this committee was to assess the needs of the military branches and attend to said needs. Seeing a drastic need for trained soldiers, the Student Army Training Corps was created to provide "special training for men entering the service through voluntary induction". Training camps were held in the summer of 1918 to prepare institutions with at least one-hundred male students for the induction of the SATC that fall. Training started July 18 and lasted for sixty days.

The SATC officially began on October 1, 1918. It was located on 525 educational institutions and inducted 200,000 total students on the first day. Unlike the Selective Service Draft, enrollment in the SATC was completely voluntary. However, doing so gave you the rank of private in the United States army, therefore this was not a way of avoiding enlistment. While attending the SATC did allow for young men to stay on the home front, the ultimate goal of this was creating trained soldiers for the military.[34]

The SATC was short lived. With the Armistice being signed on November 11, 1918 the Army's need for more soldiers ended. The SATC was disbanded in December 1918.

Retrieved from "https://en.wikipedia.org/w/index.php?title=Reserve_Officers%27_Training_Corps&oldid=972911524"
Categories:
Hidden categories:
The article is a derivative under the Creative Commons Attribution-ShareAlike License. A link to the original article can be found here and attribution parties here. By using this site, you agree to the Terms of Use. Gpedia Ⓡ is a registered trademark of the Cyberajah Pty Ltd.