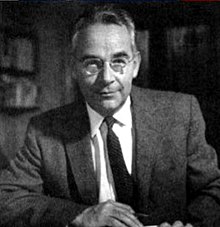 Rudolf Modley (November 3, 1906 - September 28, 1976)[1][2] was an Austrian-American research executive, graphic designer, management consultant and author, who founded Pictorial Statistics Inc. in 1934. He illustrated and wrote a series of books on pictorial statistics and pictorial symbolism.

Modley was born in Vienna, Austria in 1906 to Alfred and Elsa (Hoffmann) Moddley. After regular education and high school, he studied at the University of Vienna, where he obtained his Doctor of Law degree in 1929.[8][2]

During his studies in Vienna Modley had been assistant to Otto Neurath in the Social Museum,[9][4] which Neurath had founded in 1923 and directed ever since. Modley had got acquainted with Otto Neurath’s isotype, while still at high school, and since those days he had worked as volunteer for Neurath. In 1928 he got a part-time appointed as staff member and instructor for foreign visitors at the museum.[10]

Early career in the U.S.

Infographic on agriculture surpassed by Industry by Modley, 1938

In 1930 Modley came to the United States to do postgraduate work at the University of Chicago.[2][8] Recommended by Neurath he got appointed curator of Social Science at the Museum of Science and Industry in Chicago[9] by Waldemar Kaempffert, a cousin of Neurath.[11] By the end of 1931 Modley had to go back to Austria to obtain a permanent resident status, and returned in 1932.[11]

In 1933 Modley had moved to New York,[12] where he in 1934 he founded Pictorial Statistics Incorporated. The company promoted the production and distribution of ISOTYPE-like pictographs for education, news, and other forms of communications.[13] The company was set up as "a non-profit organization that offered to draw charts, including Isotypes, for any editor or publisher interested in illustrating economic and social articles."[14]

Pictorial Statistics Inc. followed an independent course from Otto Neurath, who had set up an own institute, the Institute for Visual Education, to promote his ideas in the U.S.[15] Modley also started working as consultant for several government agencies.[9]

Later career in the U.S.

In the mid-1960s, Modley joined forces with cultural anthropologist Margaret Mead, jointly establishing an organization called Glyphs Inc., whose goal was to create a universal graphic symbol language to be understood by any members of culture, no matter how primitive.[16]

In his later years Modley was management consultant for several trade association. Modley died in the Illinois Masonic Medical Center in Chicago in 1976.[2]

In the late 1930s the work of Otto Neurath and his method of picture statistics, the "Vienna method," had come into prominence, and with it Modley was a rising star. In his famous 1937 thesis Howard G. Funkhouser had stipulated Otto Neurath and the Vienna Method, as follows:

"The Vienna Method of Picture Statistics. - The most rapidly growing system of graphic representation with the drive of vigorous propaganda behind it is the "Vienna method" recently developed by its active exponent, Dr. OTTO NEURATH, formerly of Vienna. Dr. NEURATH'S chief contribution to the phase of the graphic method known as picture statistics has been the development of a standard symbolism for the pictures and hieroglyphs suggested and used by earlier writers, chiefly BRINTON, HASKELL and KARSTEN."[17]

Although Funkhouser didn't call Modley by name, he did refer to his company Pictorial Statistics, Inc. with the text:

"Aided by the work of NEURATH and his associates but separated from the basic theory and philosophy which characterizes their use by NEURATH, picture statistics are growing in favor with busi- ness organizations and others who desire to present statistics in a popular manner. An organization has been formed recently in the United States for the purpose of supplying this type of graphic material."[18]

A 1938 article in The New Yorker, entitled "Modley's Little Men," brought forward the role of Modley, and described their key-message:

... It's Doctor Neurath's (and Mr. Modley's) theory that the strain of present-day prose is a little too much for the average man, and that if you want to be sure he grasps an idea you'd better resort to pictures...[19]

The article concluded that this was "discouraging, but probably true."[13]

Retrieved from "https://en.wikipedia.org/w/index.php?title=Rudolf_Modley&oldid=902549013"
Categories:
Hidden categories:
The article is a derivative under the Creative Commons Attribution-ShareAlike License. A link to the original article can be found here and attribution parties here. By using this site, you agree to the Terms of Use. Gpedia Ⓡ is a registered trademark of the Cyberajah Pty Ltd.