Salaries of members of the United States Congress

This chart shows historical information on the salaries that members of the United States Congress have been paid.[1] The Government Ethics Reform Act of 1989 provides for an automatic increase in salary each year as a cost of living adjustment that reflects the employment cost index.[2] Since 2010 Congress has annually voted not to accept the increase, keeping it at the same nominal amount since 2009. The Twenty-seventh Amendment to the United States Constitution, ratified in 1992, prohibits any law affecting compensation from taking effect until after the next election. 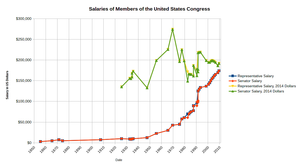 Salaries, shown for US Senators and US Representatives. Also shown: salaries adjusted to 2014 US Dollars.

Additional pay schedule for the Senate and House positions:

Retrieved from "https://en.wikipedia.org/w/index.php?title=Salaries_of_members_of_the_United_States_Congress&oldid=975995564"
Categories:
The article is a derivative under the Creative Commons Attribution-ShareAlike License. A link to the original article can be found here and attribution parties here. By using this site, you agree to the Terms of Use. Gpedia Ⓡ is a registered trademark of the Cyberajah Pty Ltd.