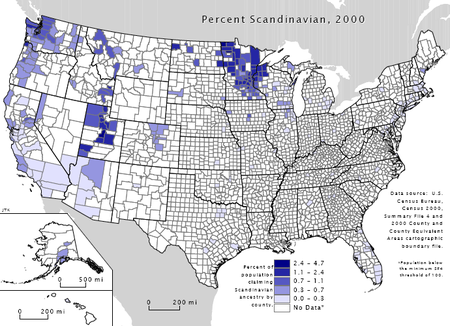 The broad definition of Scandinavia includes Norway, Sweden, Denmark (without Greenland and the Faroese Islands), the semi-independent Finnish territory of Åland and the Swedish-speaking people of Finland (mostly concentrated in Western Finland). The joint ruling of Denmark and Norway from the mid-14th century until 1814, and then the joint rule of Sweden and Norway until 1905, have contributed towards a coherent culture and language. The Scandinavian languages are all descended from old Norse, and unlike Faroese and Icelandic, which have kept more of the old Norse grammar and spelling, the Scandinavian languages have undergone more or less the same simplifications and are mutually intelligible and readable, although the degree of ease with which people understand each other varies depending on country (and region) of origin.

The term Scandinavia is often misused when the term Nordic is meant. The Nordic countries consists of Norway, Sweden, Denmark, Iceland, Greenland (a semi-independent Danish realm), the Faroese Islands (a semi-independent Danish realm), Åland (a semi-independent Swedish-speaking Finnish realm) and Finland. Sometimes also Estonia, Latvia and Lithuania are included, due to the tiny group of Estonian Swedes in the archipelago of Northern Estonia. Unlike the three linguistically Scandinavian countries, the Nordic countries have languages that are only partially mutually intelligible (closest being Icelandic-Faroese on one hand and Danish-Norwegian-Swedish on the other).

Retrieved from "https://en.wikipedia.org/w/index.php?title=Scandinavian_Americans&oldid=969220414"
Categories:
Hidden categories:
The article is a derivative under the Creative Commons Attribution-ShareAlike License. A link to the original article can be found here and attribution parties here. By using this site, you agree to the Terms of Use. Gpedia Ⓡ is a registered trademark of the Cyberajah Pty Ltd.