Jump to navigation Jump to search
For the military conflict, see Battle of Shiloh.

Shiloh National Military Park preserves the American Civil War Shiloh and Corinth battlefields. The main section of the park is in the unincorporated town of Shiloh, about nine miles (14 km) south of Savannah, Tennessee, with an additional area located in the city of Corinth, Mississippi, 23 miles (37 km) southwest of Shiloh. The Battle of Shiloh began a six-month struggle for the key railroad junction at Corinth. Afterward, Union forces marched from Pittsburg Landing to take Corinth in a May siege, then withstood an October Confederate counter-attack.

The visitor center provides exhibitions, films and a self-guided auto-tour.

The Battle of Shiloh was one of the first major battles in the Western Theater of the American Civil War. The two-day battle, April 6 and April 7, 1862, involved about 65,000 Union troops under Ulysses S. Grant and Don Carlos Buell and 44,000 Confederates under Albert Sidney Johnston (killed in the battle) and P.G.T. Beauregard. The battle resulted in nearly 24,000 killed, wounded, and missing. The two days of fighting did not end in a decisive tactical victory for either side—the Union held the battlefield but failed to pursue the withdrawing Confederate forces. However, it was a decisive strategic defeat for the Confederate forces that had massed to oppose Grant's and Buell's invasion through Tennessee. After the Battle of Shiloh, the Union forces proceeded to capture Corinth and the critical railroad junction there.

The Shiloh National Military Park was established on December 27, 1894. In 1904, Basil Wilson Duke was appointed commissioner of Shiloh National Military Park by President Theodore Roosevelt. There were requests of local farmers who had grown tired of their pigs rooting up the remains of soldiers that had fallen during the battle, insisting that the federal government do something about it. The park was transferred from the War Department to the National Park Service on August 10, 1933. As with all historic areas administered by the National Park Service, the military park was listed on the National Register of Historic Places on October 15, 1966. On September 22, 2000, sites associated with the Corinth battlefield (see First and Second Battles of Corinth) were added to the park. The Siege and Battle of Corinth Sites was designated a National Historic Landmark on May 6, 1991.[2][2][3] The National Park Travelers Club held its 2013 convention at Shiloh.[4] The Civil War Trust (a division of the American Battlefield Trust) and its federal, state and local partners have acquired and preserved 1,317 acres (5.33 km2) of the battlefield in more than 25 different transactions since 2001. Most of this land has been sold or conveyed to the National Park Service and incorporated into the park.[5]

Shiloh National Cemetery is in the northeast corner of the park[6] adjacent to the visitor center and bookstore. Buried within its 20.09 acres (81,300 m2) are 3584 Union dead (of whom 2357 are unknown), who were re-interred in the cemetery created after the war, in 1866. There are two Confederate dead interred in the cemetery. The cemetery operations were transferred from War Department to the National Park Service in 1933. An unknown number of Confederate dead are interred in mass graves in the park. 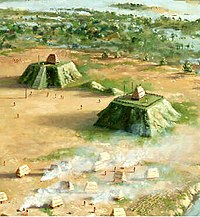 The Shiloh battlefield has within its boundaries the well preserved prehistoric Shiloh Indian Mounds Site, which is also a National Historic Landmark. The site was inhabited during the Early Mississippian period from about 1000 to 1450 CE.[7]

Retrieved from "https://en.wikipedia.org/w/index.php?title=Shiloh_National_Military_Park&oldid=934559245"
Categories:
Hidden categories:
The article is a derivative under the Creative Commons Attribution-ShareAlike License. A link to the original article can be found here and attribution parties here. By using this site, you agree to the Terms of Use. Gpedia Ⓡ is a registered trademark of the Cyberajah Pty Ltd.