Signing of the United States Constitution

Jump to navigation Jump to search
Not to be confused with Howard Chandler Christy's painting Scene at the Signing of the Constitution of the United States.

The Signing of the United States Constitution occurred on September 17, 1787, at Independence Hall in Philadelphia, Pennsylvania, when 39 delegates to the Constitutional Convention, representing 12 states (all but Rhode Island, which declined to send delegates), endorsed the Constitution created during the four-month-long convention. In addition to signatures, this endorsement, the Constitution's eschatocol, included a brief declaration that the delegates' work has been successfully completed and that those whose signatures appear on it subscribe to the final document. Included are, a statement pronouncing the document's adoption by the states present, a formulaic dating of its adoption, along with the signatures of those endorsing it. Additionally, the convention's secretary, William Jackson, added a note to verify four amendments made by hand to the final document, and signed the note to authenticate its validity.[1]

The language of the concluding endorsement, conceived by Gouverneur Morris and presented to the convention by Benjamin Franklin, was made intentionally ambiguous in hopes of winning over the votes of dissenting delegates. Advocates for the new frame of government, realizing the impending difficulty of obtaining the consent of the states needed for it to become operational, were anxious to obtain the unanimous support of the delegations from each state. It was feared that many of the delegates would refuse to give their individual assent to the Constitution. Therefore, in order that the action of the Convention would appear to be unanimous, the formula, Done in convention by the unanimous consent of the states present ... was devised.

The U.S. Constitution lays out the frame of the nation's federal government and delineates how its 3 branches (legislative, executive, and judicial) are to function. Of those who signed it, virtually every one had taken part in the American Revolution; seven had signed the Declaration of Independence, and thirty had served on active military duty. In general, they represented a cross-section of 18th-century American leadership, with individuals having experience in local or colonial and state government. Jonathan Dayton, age 26, was the youngest to sign the Constitution, while Benjamin Franklin, age 81, was the oldest.[2] 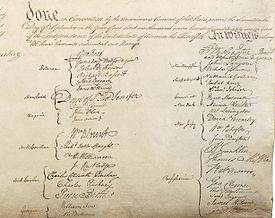 The closing endorsement section of the United States Constitution 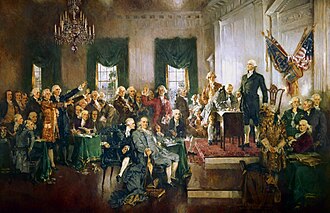 Scene at the Signing of the Constitution of the United States, by Howard Chandler Christy (1940)

On July 24, 1787 convention delegates selected a Committee of Detail to write-up a draft constitution reflective of the resolutions passed by the convention up to that point.[3] The final report of this committee, a twenty-three article (plus a preamble) document, became the first draft of the constitution. Overall, the draft produced by the committee conformed to the resolutions adopted by the Convention, though some portions were rephrased during the process.[4]

Even after it issued this report, the committee continued to meet off and on until early September. The draft constitution was discussed, section by section and clause by clause. Details were attended to, and further compromises were effected.[3][5]

On September 8, 1787, a Committee of Style, with different members, was impaneled to distill a final draft constitution from the twenty-three approved articles.[3] The final draft, presented to the convention on September 12, contained seven articles, a preamble, and a closing statement, cleverly written by Gouverneur Morris so as to make the constitution seem unanimous.[6][7] The committee also presented a proposed letter to accompany the constitution when delivered to the Congress of the Confederation.[8]

The final document, engrossed by Jacob Shallus,[9] was taken up on Monday, September 17, at the Convention's final session. Several delegates were disappointed by the numerous compromises contained in the final document, believing that they had impaired its quality.

Alexander Hamilton called the Constitution a "weak and worthless fabric", certain to be superseded. Luther Martin regarded it as a stab in the back of the goddess of liberty. The most that Madison and the majority of delegates hoped, was that this practical, workable constitution, planned to meet the immediate needs of thirteen states with approximately four million people, would last a generation.[7]

In all, twelve of the thirteen states sent delegates to the Constitutional Convention; a total of 74 were named, 55 attended and 39 signed.[6] Several attendees left before the signing ceremony, and three that did not refused to sign. Benjamin Franklin summed up the sentiments of those who did sign, stating: "There are several parts of this Constitution which I do not at present approve, but I am not sure I shall never approve them." He would accept the Constitution, "because I expect no better and because I am not sure that it is not the best".[10] 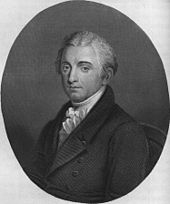 The closing endorsement of the U.S. Constitution serves an authentication function only. It neither assigns powers to the federal government nor does it provide specific limitations on government action. It does however, provide essential documentation of the Constitution's validity, a statement of "This is what was agreed to." It records who signed the Constitution, plus when and where they signed. It also describes the role played by the signers in developing the document. Due to this limited function, it is frequently overlooked and no court has ever cited it when reaching a judicial decision.

On the final day of the Constitutional Convention, Benjamin Franklin delivered an address (read by James Wilson) strongly endorsing the Constitution despite any perceived imperfections. Hoping to gain the support of critics and create a sense of common accord, Franklin then proposed, and the convention agreed, that the Constitution be endorsed by the delegates as individual witnesses of the unanimous consent of the states present. Thus the signers subscribed their names as witnesses to what was done in convention (rather than on the part and behalf of particular states, as they had in the Articles of Confederation). The signers' names are, with the exception of Convention President George Washington, grouped by state, with the listing of states arraigned geographically, from north to south.[11]

Seventy-four individuals were selected to attend the Constitutional Convention, but a number of them could not attend or chose not to attend. In all, fifty-five delegates participated in the convention, though thirteen of them dropped out, either for personal reasons in protest over decisions made during the deliberations. Three individuals remained engaged in the work of the convention until its completion, but then refused to sign the final draft.[12]

The names of thirty-nine delegates are inscribed upon the proposed constitution. Among them is John Dickinson, who, indisposed by illness, authorized George Read to sign his name by proxy. Additionally, the convention's secretary, William Jackson, while not himself a delegate, signed the document to authenticate some corrections. George Washington, as president of the Convention, signed first, followed by the other delegates, grouped by states in progression from north to south. Washington, however, signed near the right margin of the page, and when the delegates ran out of space they began a second column of signatures to the left.[2]

Jonathan Dayton, aged 26, was the youngest to sign the Constitution, while Benjamin Franklin, aged 81, was the oldest. Franklin was also the first signer to die, in April 1790, while James Madison was the last, dying in June 1836. Virtually every signer had taken part in the Revolution; at least 29 had served in the Continental forces, most of them in positions of command. All but seven were native to the thirteen colonies: Pierce Butler, Thomas Fitzsimons, James McHenry, and William Paterson were born in Ireland, Robert Morris in England, James Wilson in Scotland, and Alexander Hamilton in the West Indies.[13] 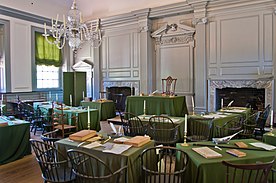 Independence Hall's Assembly Room, where both the Constitution and Declaration of Independence were debated and signed. 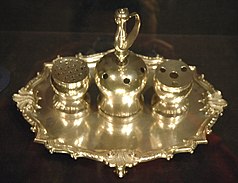 The Syng inkstand, used at the signing of the Constitution and, eleven years earlier, the Declaration of Independence.

Retrieved from "https://en.wikipedia.org/w/index.php?title=Signing_of_the_United_States_Constitution&oldid=941494162"
Categories:
The article is a derivative under the Creative Commons Attribution-ShareAlike License. A link to the original article can be found here and attribution parties here. By using this site, you agree to the Terms of Use. Gpedia Ⓡ is a registered trademark of the Cyberajah Pty Ltd.