Jump to navigation Jump to search
Culinary traditions of Singapore

Aerial view of Lau Pa Sat, one of the most iconic hawker centres in Singapore. Eating in a hawker centre is a prevalent culinary culture for Singaporeans.

Singaporean cuisine encompasses the diverse elements of culinary culture of Singapore — derived from several ethnic groups which have developed through centuries of political, economic, and social changes of this cosmopolitan city-state.

Influences include the cuisines of the Malays, the Chinese and the Indians as well as Indonesian, Peranakan and Western traditions (particularly English and Portuguese-influenced Eurasian, known as Kristang).[1] Influences from neighbouring regions such as Japan, Korea, and Thailand are also majorly present.

In Singapore, food is viewed as crucial to its national identity and a unifying cultural thread. Singaporean literature declares eating a national pastime and food a national obsession. Food is a frequent topic of conversation among Singaporeans. Religious dietary strictures do exist; Muslims do not eat pork and Hindus do not eat beef, and there is also a significant group of vegetarians/vegans. People from different communities often eat together, while being mindful of each other's culture and choosing food that is acceptable for all.

Other than local Singaporean cuisine, it is also common to find restaurants specialising in cuisine from a great variety of countries outside Asia.

When dining out, Singaporeans often eat at hawker centres, coffee shops or food courts rather than restaurants, due to convenience, a wider range of options and affordability. These hawker centres are widespread, cheap and usually feature dozens of stalls in a single complex, with each stall offering its own speciality dishes. Well-known hawker centres among tourists include Telok Ayer Market, Lau Pa Sat and Newton Food Centre. Coffee shops are non-air conditioned versions of food courts and are commonly found island-wide, usually at the bottom of blocks of HDB flats. Hawker centres are the place where people can experience all kinds of different cultural food in one place. Hawker centres, or open air food courts, have come to define Singaporean food culture. Popular markets like Old Airport Road Food Centre in Geylang, Golden Mile Food Centre on Beach Road and Maxwell Road Food Centre in Chinatown offer the best of Chinese, Malaysian and Indian cooking, melded into foods that are uniquely Singaporean.[2]

In 2018, Singapore hawker culture was nominated by Singapore's National Heritage Board (NHB), National Environment Agency and Federation of Merchants' Associations Singapore for inscription into Unesco's Representative List of the Intangible Cultural Heritage of Humanity[6]

Bak kut teh, one of the food often associated with Singapore

Singaporean food is a significant cultural attraction for tourists and visitors. Some Singaporean dishes have become internationally known. In 2011, four Singaporean dishes were included in the list of 'World's 50 Most Delicious Foods (Readers' Pick)' – a worldwide online poll by 35,000 people held by CNN International. They are Hainanese chicken rice (13th), chili crab (29th), Katong Laksa (44th) and roti prata (45th).[7]

Gordon Ramsay participated in a 'Hawker Heroes Challenge' held in Singapore in 2013, in which each competitor made three dishes. Ramsay's chili crab was voted the best, but he lost on the other two dishes. Losing to Ryan Koh representing 328 Katong Laksa and Foo Kui Lian representing Tian Tian Chicken Rice, he graciously accepted defeat. He mentioned being in absolute awe of the hawkers, and was humbled by how they welcomed him into their kitchens and taught him to cook.[9]

YouTube personality Mike Chen, better known by his username StrictlyDumpling, has created several videos bringing attention to local cuisine on his channel. Over the course of 13 videos he highlighted Singaporean street food, hawker centres, local buffets and restaurants. These videos have a combined view count of over 17 million views.

Singaporean cuisine has been promoted as a tourist attraction by the Singapore Tourism Board. The Singapore Food Festival, held every year in July, is a celebration of Singapore's cuisine. The Overseas Singaporean Unit also organises Singapore Day in major cities around the world as a platform for Singaporeans living abroad.[10] One of Singapore Day's major draws is the local Singaporean hawker food, which is prepared on-site by well-known hawkers specially flown in for the event. 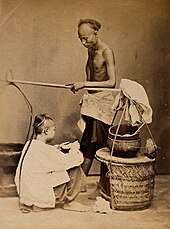 Singapore is geographically located in between the Pacific and Indian oceans but it also has the shape of a peninsula and an island at the same time, where various cultures and trades used to and continue to occur. Indonesia is located to the south, Thailand, China, the Philippines and Malaysia are located to the north and India is located to the west. Since Singapore's position is between various Asian countries, there is a diversity in food and culture.[2] "When Stamford Raffles sought to convert Singapore into a trading post for the East India Company in 1819, immigrants from China, Malaya, India, Indonesia, Europe, the United States and the Middle East flocked to the island.[2] The culture of Singapore is made up of diverse influences from different continents and countries. This led Singapore cuisine to be mixed-cultural society food. Like many other Asian countries, Singapore experienced a period of colonisation. Singapore used to be colonised by Britain from the early 19th century to the mid-20th century, and like most of Asian countries did, they were ruled by Japan during World War 2.[11] Colonisation of Japan also influenced Singaporean cuisine. For instance, yee sang, which Singaporean Chinese enjoy eating during the Lunar New Year, includes raw fish, which is a rare ingredient to put in dishes except for Japanese or Korean dishes.[citation needed]

A common greeting for the Singaporean Chinese is the question "Have you eaten?", asked in the various Chinese dialects. It is one way to express a greeting to another person. It is also possible to assume that this is how Singaporeans think about the meal and food. Since Singapore is a mixed cultural nation there is a diverse range of people who might have different and restricted diets, such as Muslims and Hindus.[12] Since Singapore is influenced by so many different regions, religion, and areas, there are also many events or anniversaries. During the Lunar New Year, people eat nian gao, which is originally from China, and is traditionally eaten around the Chinese New Year. Singapore's cuisine is as diverse as its culture. It is an extension of Malay cuisine but influenced by the Chinese – not to mention the Indians, Arabs, British and other settlers who have contributed to making Singapore one of the world's most important trading ports.[citation needed]

Types of food and some world popular food

Singaporean food can be divided into five types: meat, seafood, rice, noodles, and dessert or snacks. Singapore is especially renowned for its seafood. Chili crab and black pepper crab are two quintessential dishes that dominate the scene and are greatly recommended to tourists. Another favourite is sambal stingray. In the meat category, Hainanese chicken rice is the most popular dish. Essentially, it is rice cooked with chicken fat, served with boiled chicken, accompanied with chili sauce. Three noodle dishes stand out in Singapore cuisine. "Fried Hokkien mee", fried egg noodles with prawns, sliced pork and gravy, "Nyonya laksa", rice noodles served in a coconut prawn broth and "Char Kuey Teow", stir-fried rice noodles with prawns, Chinese sausage, lard and cockles. In the snack category, kaya toast is the representative dish, primarily due to the use of kaya. "Kaya kopitiams" are a common sight on the island. These affordable coffee shops dish out bread toasts, spread with coconut egg jam and butter, served with coffee and tea as well as two soft Boiled eggs.

The dishes that comprise "Singaporean Chinese cuisine" today were originally brought to Singapore by the early southern Chinese immigrants (Hokkien, Teochew, Cantonese, Hakka and Hainanese). They were then adapted to suit the local availability of ingredients, while absorbing influences from Malay, Indian and other cooking traditions.

Most of the names of Singaporean Chinese dishes were derived from dialects of southern China, Hokkien (Min Nan) being the most common. As there was no common system for transliterating these dialects into the Latin alphabet, it is common to see different variants on the same name for a single dish. For example, bah kut teh may also be spelt bak kut teh, and char kway tiao may also be spelt char kuay teow. 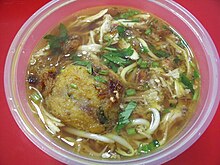 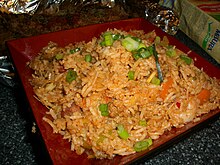 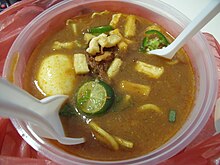 Situated between Malaysia and Indonesia, Singaporean Malay dishes is influenced by the food of the neighbouring Malay Peninsula, Sumatra, Java and the Riau Islands. Despite absorbing regional influences, it tends to be adapted to local tastes and differ from their counterparts in neighbouring countries. Although Malays are native to Singapore, most Malays in Singapore today are either relatively recent immigrants from Indonesia and Malaysia, or the descendants of these immigrants.[15] Hence, Singaporean Malay cuisine features a unique set of influences, especially from Minang cuisine. Spices and coconut milk are common ingredients, although Chinese ingredients such as taupok (tofu puffs) and tofu (known as tauhu in Malay) have been integrated. Many Chinese and Tamil Muslim adaptations of the following dishes also exist. Pork is not used as it's prohibited in Islam. 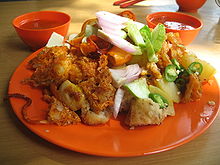 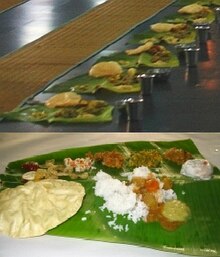 Rice served with papadum on a banana leaf

Like other Singaporean ethnic cuisines, Singaporean Indian cuisine has been influenced by multiple cultural groups. Dishes from both North India and South India can be found in Singapore.[19] 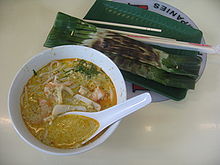 A number of dishes, listed below, can be considered as truly hybrid or multi-ethnic food.

A wide variety of tropical fruits are available all year round. By far the most well known is the durian, known as the "King of Fruits", which produces a characteristic odour from the creamy yellow custard-like flesh within its spiky green or brown shell. Durians are banned on public transport, elevators, certain hotels, and public buildings because of their strong odour.

Other popular tropical fruits include mangosteen, jackfruit, longan, lychee, rambutan, soursoup, pineapple and mango. Some of these fruits also are used as ingredients for other dishes: iced desserts, sweet-and-sour pork, and certain types of salad such as rojak. 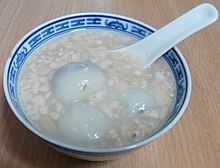 Singaporean desserts have a varied history. A typical food court or hawker centre dessert stall will usually have a large variety of desserts available, including but not limited to:

Wafer ice cream sandwiches are a popular dish sold by street vendors operating carts on busy street corners. These carts carry a variety of flavours, including but not limited to vanilla, chocolate, strawberry, coffee, sweet corn, coconut, and durian. While some vendors sell their ice cream in cups or cones, as is common in the West, the more popular variant is on slices of bread or between wafers. The ice cream consists of sealed blocks which are sliced to order and then placed on a single slice of over-sized, often multicolored bread. This can be either white bread or a slice of multicolored, slightly sweetened bread (dyed with food colouring and flavoured with pandan leaf extract). A sandwich costs around S$1 but may cost up to S$2 or more in downtown areas and tourist spots. 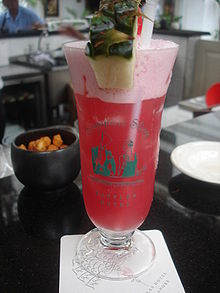 Retrieved from "https://en.wikipedia.org/w/index.php?title=Singaporean_cuisine&oldid=972313436"
Categories:
Hidden categories:
The article is a derivative under the Creative Commons Attribution-ShareAlike License. A link to the original article can be found here and attribution parties here. By using this site, you agree to the Terms of Use. Gpedia Ⓡ is a registered trademark of the Cyberajah Pty Ltd.