Ei River Dam (ca. 1959) and Ei River Hydro Electric Plant, which supplied all of the hydroelectric power for the mines and region

One of the generators in the Ei River Hydro Electric Plant, which supplied all of the hydroelectric power for the mines and region, circa 1959

Siuna is a county-sized administrative municipality and a city in Nicaragua, located approximately 318 kilometres (198 mi) northeast of the capital city of Managua and 218 kilometres (135 mi) west of the coastal city and regional capital Puerto Cabezas in the North Caribbean Autonomous Region (RACN). Siuna is the name of the city as well as the municipality. The municipality of Siuna contains 204 rural communities and 20 neighborhoods. Most were settled in support of gold mining along the Ei River drainage basin, leading to rapid population growth from the mid-1930s. 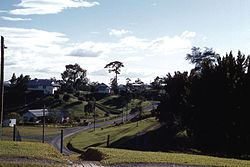 Siuna International housing campus of the La Luz Gold Mine (ca. 1959). The housing complex for international workers overlooks the mine complex of the above photo.

There are 20 neighborhoods[3] that originally had names based on the population that lived there during the mining, such as "Moskitown" (where the Miskitos lived) and "Jamaicatown" (where the Creoles lived). Although these names are commonly used, today all neighborhoods have Spanish names.

The town of Siuna was the site of La Luz Mining company, which was active from 1936 to 1968. There was migration from other areas of the country to work in the gold mine during those years, including people from the coast and indigenous groups. The mine was shut down in 1968 due to damage of the hydroelectric plant.[5]

Currently, Calibre Mining owns the mine, but it is inactive. The only producing mine in the mining triangle is in Bonanza, and operated through HEMCO.

The following government institutions are present and working in Siuna: MINSA, MARENA, INTA, INAFOR, and as well as the SILAIS office for the RACCN.

The majority of the population today are farmers after the closing of the regional gold mining operations. Service businesses and the educational institutions round out the town's employment. The primary crops are beans and corn. There is a greater focus in recent years on cacao production as alternative income. The organization Cacao RAAN works with a number of cooperatives in the region focused on cacao and chocolate production.

Bridges to Community's approach is unique in that the NGO only works in communities that solicit the NGO's support and works with the community on projects that the community wants. In addition the approach focuses not only on construction of projects but of exchange between people and cultures through service learning and reflection.

In 2013 Bridges to Community will begin work in the community of Tadazna.

Siuna Airport is served by Avianca Nicaragua (La Costeña). The town may be reached by bus on the Managua - Puerto Cabezas Highway or through Waslala on the Matagalpa - Waslala - Siuna road. The bus from Managua to Siuna takes 12 hours through Rio Blanco on the Puerto Cabezas road. Siuna is located 99 kilometres (62 mi) from Waslala and takes about 6 hours by bus.

In town taxis as well as a local bus system provide transportation to the public.

Retrieved from "https://en.wikipedia.org/w/index.php?title=Siuna,_Nicaragua&oldid=997039503"
Categories:
Hidden categories:
The article is a derivative under the Creative Commons Attribution-ShareAlike License. A link to the original article can be found here and attribution parties here. By using this site, you agree to the Terms of Use. Gpedia Ⓡ is a registered trademark of the Cyberajah Pty Ltd.