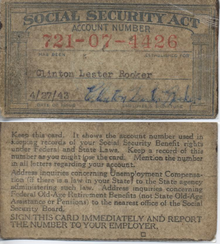 A Social Security card issued by the Railroad Retirement Board in 1943 to a now deceased person.

Before 1986, people often did not obtain a Social Security number until the age of about 14,[7] since the numbers were used for income tracking purposes, and those under that age seldom had substantial income.[8] The Tax Reform Act of 1986 required parents to list Social Security numbers for each dependent over the age of 5 for whom the parent wanted to claim a tax deduction.[9] Before this act, parents claiming tax deductions were simply trusted not to lie about the number of children they supported. During the first year of the Tax Reform Act, this anti-fraud change resulted in seven million fewer minor dependents being claimed. The disappearance of these dependents is believed to have involved either children who never existed or tax deductions improperly claimed by non-custodial parents.[10] In 1988, the threshold was lowered to two years old, and in 1990, the threshold was lowered yet again to one year old.[11] Today, an SSN is required regardless of the child's age to receive an exemption.[citation needed] Since then, parents have often applied for Social Security numbers for their children soon after birth; today, it can be done on the application for a birth certificate.[12]

The original purpose of this number was to track individuals' accounts within the Social Security program. It has since come to be used as an identifier for individuals within the United States, although rare errors occur where duplicates do exist. As numbers are now assigned by the central issuing office of the SSA, it is unlikely that duplication will ever occur again. A few duplications did occur when prenumbered cards were sent out to regional SSA offices and (originally) Post Offices.

Beginning in June 2011, DOD began removing the Social Security number from military identification cards. It is replaced by a unique DOD identification number, formerly known as the EDIPI.[14]

An old Social Security card with the "not for identification" message

Social Security was originally a universal tax, but when Medicare was passed in 1965, objecting religious groups in existence prior to 1951 were allowed to opt out of the system.[15] Because of this, not every American is part of the Social Security program, and not everyone has a number. However, a Social Security number is required for parents to claim their children as dependents for federal income tax purposes,[12] and the Internal Revenue Service requires all corporations to obtain SSNs (or alternative identifying numbers) from their employees, as described below. The Old Order Amish have fought to prevent universal Social Security by overturning rules such as a requirement to provide a Social Security number for a hunting license.[16]

Social Security cards printed from January 1946 until January 1972 expressly stated that people should not use the number and card for identification.[17] Since nearly everyone in the United States now has an SSN, it became convenient to use it anyway and the message was removed.[18]

Since then, Social Security numbers have become de facto national identification numbers.[2] Although some people do not have an SSN assigned to them, it is becoming increasingly difficult to engage in legitimate financial activities such as applying for a loan or a bank account without one.[19] While the government cannot require an individual to disclose their SSN without a legal basis, companies may refuse to provide service to an individual who does not provide an SSN.[20][21] The card on which an SSN is issued is still not suitable for primary identification as it has no photograph, no physical description, and no birth date. All it does is confirm that a particular number has been issued to a particular name. Instead, a driver's license or state ID card is used as an identification for adults.

Use required for federal tax purposes

Internal Revenue Code section 6109(d) provides: "The social security account number issued to an individual for purposes of section 205(c)(2)(A) of the Social Security Act [codified as 42 U.S.C. § 405(c)(2)(A)] shall, except as shall otherwise be specified under regulations of the Secretary [of the Treasury or his delegate], be used as the identifying number for such individual for purposes of this title [the Internal Revenue Code, title 26 of the United States Code]."[22]

The Internal Revenue Code also provides, when required by regulations prescribed by the Secretary [of the Treasury or his delegate]:

According to U.S. Treasury regulations, any person who, after October 31, 1962, works as an employee for wages subject to Social Security taxes, Medicare taxes, or U.S. federal income tax withholdings is required to apply for "an account number" using "Form SS-5."[24]

A taxpayer who is not eligible to have a Social Security number must obtain an alternative Taxpayer Identification Number.

The new SSN card design utilizes both covert and overt security features created by the SSA and GPO design teams.

Many citizens and privacy advocates are concerned about the disclosure and processing of Social Security numbers. Furthermore, researchers at Carnegie Mellon University have demonstrated an algorithm that uses publicly available personal information to reconstruct a given SSN.[25]

The SSN is frequently used by those involved in identity theft, since it is interconnected with many other forms of identification, and because people asking for it treat it as an authenticator. Financial institutions generally require an SSN to set up bank accounts, credit cards, and loans—partly because they assume that no one except the person it was issued to knows it.

Exacerbating the problem of using the Social Security number as an identifier is the fact that the Social Security card contains no biometric identifiers of any sort, making it essentially impossible to tell whether a person using a certain SSN truly belongs to someone without relying on other documentation (which may itself have been falsely procured through use of the fraudulent SSN). Congress has proposed federal laws that restrict the use of SSNs for identification and bans their use for a number of commercial purposes—e.g., rental applications.[26]

The Internal Revenue Service (IRS) offers alternatives to SSNs in some places where providing untrusted parties with identification numbers is essential. Tax return preparers must obtain and use a Preparer Tax Identification Number (PTIN) to include on their client's tax returns (as part of signature requirements). Day care services have tax benefits, and even a sole proprietor should give parents an EIN (employer identification number) to use on their tax return.

The Social Security Administration has suggested that, if asked to provide his or her Social Security number, a citizen should ask which law requires its use.[27] In accordance with §7213 of the 9/11 Commission Implementation Act of 2004 and 20 C.F.R. 422.103(e)(2), the number of replacement Social Security cards per person is generally limited to three per calendar year and ten in a lifetime.[27]

Identity confusion has also occurred because of the use of local Social Security numbers by the Federated States of Micronesia, the Republic of the Marshall Islands, and the Republic of Palau, whose numbers overlap with those of residents of New Hampshire and Maine.[28]

A person can request a new Social Security number, but only under certain conditions;[29]

For all of these conditions, credible third-party evidence such as a restraining order or police report is required.

Because Individual Taxpayer Identification Numbers (ITINs) are issued by the Internal Revenue Service (IRS), they were not affected by this SSA change.

Prior to the 2011 randomization process, the first three digits or area number were assigned by geographical region. Prior to 1973, cards were issued in local Social Security offices around the country and the area number represented the office code where the card was issued. This did not necessarily have to be in the area where the applicant lived, since a person could apply for their card in any Social Security office. Beginning in 1973, when the SSA began assigning SSNs and issuing cards centrally from Baltimore, the area number was assigned based on the ZIP Code in the mailing address provided on the application for the original Social Security card. The applicant's mailing address did not have to be the same as their place of residence. Thus, the area number did not necessarily represent the state of residence of the applicant regardless of whether the card was issued prior to, or after, 1973.

Generally, numbers were assigned beginning in the northeast and moving south and westward, so that people applying from addresses on the east coast had the lowest numbers and those on the west coast had the highest numbers. As the areas assigned to a locality were exhausted, new areas from the pool were assigned, so some states had noncontiguous groups of numbers.

As an example, group number 98 would be issued before 11.

The last four digits, which are serial numbers, "are the most important to protect" and they can "open credit in your name, steal your money" and more.[34] Before SSN randomization took effect, they represented a straight numerical sequence of digits from 0001 to 9999 within the group.

Some special numbers are never allocated:

Until 2011, the SSA published the last group number used for each area number.[39] Since group numbers were allocated in a regular pattern, it was possible to identify an unissued SSN that contained an invalid group number. Now numbers are assigned randomly, and fraudulent SSNs are not easily detectable with publicly available information. Many online services, however, provide SSN validation.

Unlike many similar numbers, no check digit is included.

The promotional Social Security card as distributed by the F.W. Woolworth Company

Some SSNs used in advertising have rendered those numbers invalid. One famous instance of this occurred in 1938 when the E. H. Ferree Company in Lockport, New York, decided to promote its product by showing how a Social Security card would fit into its wallets. A sample card, used for display purposes, was placed in each wallet, which was sold by Woolworth and other department stores across the country; the wallet manufacturer's vice president and treasurer Douglas Patterson used the actual SSN of his secretary, Hilda Schrader Whitcher.

Even though the card was printed in red (the real card is printed in blue) and had "Specimen" printed across the front, many people used Whitcher's SSN as their own. The Social Security Administration's account of the incident also claims that the fake card was half the size of a real card, despite a miniature card's being useless for its purpose and despite Whitcher's holding two cards of apparently identical size in the accompanying photograph. Over time, the number that appeared (078-05-1120) has been claimed by a total of over 40,000 people as their own.[42] The SSA initiated an advertising campaign stating that it was incorrect to use the number (Hilda Whitcher was issued a new SSN). However, the number was found to be in use by 12 individuals as late as 1977.[42]

More recently, Todd Davis distributed his SSN in advertisements for his company's LifeLock identity theft protection service, which allowed his identity to be stolen over a dozen times.[43][44]

List showing the geographical location of the first three digits of the social security numbers assigned in the United States and its territories from 1973 until June 25, 2011. Repeated numbers indicate that they have been transferred to another location or they're shared by more than one location.

Retrieved from "https://en.wikipedia.org/w/index.php?title=Social_Security_number&oldid=975931793"
Categories:
Hidden categories:
The article is a derivative under the Creative Commons Attribution-ShareAlike License. A link to the original article can be found here and attribution parties here. By using this site, you agree to the Terms of Use. Gpedia Ⓡ is a registered trademark of the Cyberajah Pty Ltd.