Jump to navigation Jump to search
American non-profit charitable organization
This article is about a non-profit organization. For other uses, see SCV (disambiguation).

The Sons of Confederate Veterans (SCV) is an American nonprofit and charitable organization[2]:5 of male blood-descendants of Confederate veterans[2]:6–9 headquartered at the Elm Springs in Columbia, Tennessee.[2]:29 The SCV was founded on July 1, 1896, at the City Auditorium (present-day Virginia Commonwealth University Cary Street Gym) in Richmond, Virginia, by R. E. Lee Camp, No. 1, Confederate Veterans.[1][3] It is known for erecting and maintaining American Civil War memorials and graves, observing Confederate Memorial Day, and encouraging Southern historical study.[1] In recent decades, governors, legislators, courts, corporations, and anti-racism activists have placed new emphasis on the increasingly controversial public display of Confederate symbols—especially after the 2014 Ferguson unrest, the 2015 Charleston church shooting, and the 2020 killing of George Floyd. SCV has responded with its coordinated display of larger and more prominent public displays of the battle flag, some in directly defiant counter-protest.

The proclaimed purpose of the Sons of Confederate Veterans is "to encourage the preservation of history, perpetuate the hallowed memories of brave men, to assist in the observance of Confederate Memorial Day, to aid and support all members, and to perpetuate the record of the services of every Southern soldier".[1] Significant debate has occurred on whether their views represent an accurate interpretation of history[4] or a deliberate distortion of history based on the mythology and ideology of the Lost Cause of the Confederacy.[5] A project of the group, the National Confederate Museum, has continued this debate with supporters claiming the museum "will be out of the reach of the long arm of political correctness".[6] Detractors have stated that "casting the Confederacy as a honorable force standing strong against Northern aggressors is a willful misreading of the historical truth that the institution of slavery was at the core of the Civil War".[7]

Male descendants of those who served in the Confederate armed forces, or one of the constituent states, to the end of the war, died in prison or while in actual service, were killed in battle, or were honorably retired or discharged, are eligible for membership. Membership can be obtained through either lineal or collateral family lines. Kinship to a veteran must be documented genealogically. The minimum age for full membership is 12 years, but no minimum exists for cadet membership.[2]:6–9

Forty delegates from 24 camps and societies from the various Southern states were called by the R. E. Lee Camp, No. 1, Confederate Veterans (also known as United Confederate Veterans), of Richmond, Virginia, to meet on June 30 and July 1, 1896, at the City Auditorium (present-day Virginia Commonwealth University Cary Street Gym),[3] for the purpose of forming a "national organization, adopting a constitution similar in every respect to that governing the United Confederate Veterans, and permanently organized under the name United Sons of Confederate Veterans" (USCV). The preamble to the USCV constitution reads in part: "To encourage the preservation of history, perpetuate the hallowed memories of brave men, to assist in the observance of Memorial Day, and to perpetuate the record of the services of every Southern soldier". Its aims, objects, and purposes are "not to create or foster, in any manner, any feeling against the North, but to hand down to posterity the story of the glory of the men who wore the gray".[8] On July 1, the delegates elected Mr. J. E. B. Stuart, of Newport News, Virginia, son of the famous cavalry leader, Commander-in-Chief of the United Sons of Confederate Veterans.[3] 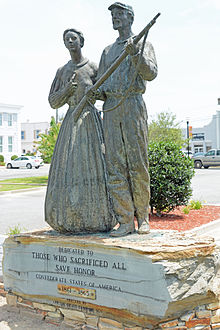 Memorial erected by the SCV in Baxley, Georgia

In early 2005, the SCV General Executive Council sued to expel Commander-in-Chief Dennis Sweeney from office. The court initially granted the council temporary control of the organization, but its final decision returned power to Sweeney. Thirteen of the 25 council members were expelled from the council shortly after Sweeney regained control. Nine of the council members expelled were former commanders-in-chief, a status that heretofore had come with a life membership on the council.[15][16] In February, Cathey wrote in the Southern Mercury that most of the members of SCV had united against the War on Southern Culture.[13] By the SCV's summer 2005 convention, activists firmly controlled the council. They severed much of the long-standing relationship between SCV and the more traditionalist Military Order of the Stars and Bars (MOSB). The MOSB, founded in 1938, had been closely involved with the SCV, sharing its headquarters since 1992 and co-publishing Southern Mercury. The MOSB's Commander General, Daniel Jones, citing "the continuing political turmoil within the SCV," moved the MOSB out of the shared quarters, ended the joint magazine publishing enterprise, and separated the two organizations' finances. In 2006, for the first time, the two organizations held separate conventions.[17]

Mississippi: In 2011, the Mississippi Division of SCV launched an unsuccessful campaign to honor Confederate Lieutenant General and KKK Grand Wizard Nathan B. Forrest with a specialty license plate.[18][19]

Texas: In 2013, the state of Texas denied a request for a Confederate Battle Flag specialty license plate, a decision later upheld in state court.[20] That state court decision was later overturned in Federal court, and the matter was ultimately heard by the U.S. Supreme Court in Walker v. Texas Division, Sons of Confederate Veterans, which held that Texas was allowed to deny the request for a specialty license plate featuring the group's logo.[21][22]

Virginia: The Virginia General Assembly approved a specialty license plate for the SCV in 1999, but lawmakers forbade the group from displaying the Confederate insignia. The organization sued for the right to display the Confederate battle flag on the license plate, and won a 2001 injunction from a Federal judge requiring the state to include the Confederate insignia. The injunction was upheld by the 4th Circuit Court of Appeals. In 2015, following the murder by a white supremacist of nine African Americans at the Emanuel AME Church in Charleston, South Carolina, Virginia Governor Terry McAuliffe announced that the Commonwealth intended to phase out the state-sponsored specialty license plate. More than 1,600 Virginians had the license plates displaying the confederate flag on their vehicles, and the SCV challenged the governor's authority to recall the license plates, citing the 2001 injunction. However, in August 2015, the court dissolved the 2001 injunction, referencing the U.S. Supreme Court ruling in the Texas case.[23] Despite the ruling, hundreds of SCV members who had the specialty plates refused to remove them from their vehicles and exchange them for new plates even after the specialty plates ceased to be valid.[24][25]

Georgia: In 2014, the state of Georgia approved a battle flag specialty license plate.[26]

Louisiana: In 1999, state Legislature of Louisiana approved a SCV specialty license plate. Through May 2017, approximately 200 plates had been issued in total.[27]

During the late 1990s, a granite marker stone for the Jefferson Davis Highway was removed from its prominent location in the city of Vancouver in Clark County, Washington, resulting in an outcry from the local Northwest Chapter of SCV.[28] The marker stone was eventually placed outside of the Clark County Historical Museum.

As Vancouver city officials continued to press for the removal of the stone from any public property within the city's boundaries, the chapter purchased land outside the nearby city of Ridgefield, Washington, during 2007. The chapter then placed the marker stone and a similar highway marker from the city of Blaine, Washington, on its property which faces the busy Interstate 5. The organization then surrounded the stones with large Confederate flags, thus creating a prominent display within an open space that the chapter named Jefferson Davis Park.[29][30]

The chapter's actions brought public outcries, but the governments of Ridgefield and Clark County could do little,[31] as the park is located on private property. The park's prominent location and events in other parts of the nation continue to make the park a local focus of strong emotions, which the white nationalist Unite the Right rally in August 2017 has exacerbated.[32][33] The vandalism of the stones on August 17, 2017, raised concern for the park, as one marker was covered in black tar or paint and the other was covered in red.[34] In October 2017, the city of Ridgefield formally asked the Clark County Historic Preservation Commission to remove the marker from the County's Heritage Register. The Commission approved the city's request by a 6 to 0 vote.[35][36] 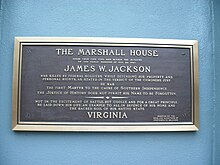 Marshall House plaque, within a blind arch near a corner of hotel in Alexandria before its removal (2009)

In 2017, Marriott International removed a bronze plaque that had been placed years earlier by SCV within a blind arch near a corner of a prominent hotel in Alexandria, Virginia, that Marriott had recently purchased. The plaque commemorated James W. Jackson, who had flown a large Confederate flag on the roof of the Marshall House, an inn that Jackson had owned at the onset of the Civil War. The Marshall House stood at that time on the property that Marriott later acquired.[37]

When the Union Army entered Alexandria during the morning after Virginia voters ratified secession, a Union Army colonel, Elmer E. Ellsworth, took down the flag, whereupon Jackson fatally shot Ellsworth.[38] A Union Army soldier, who subsequently received the Medal of Honor for his action, immediately shot and bayonetted Jackson, killing him.[38] Shortly after their mutually fatal encounter, Jackson and Ellsworth became heroes to promoters of their respective causes, who hailed them as martyrs during recruiting campaigns.[37][38]

SCV took a more active approach after both the election of President Donald Trump in 2016, and moves by some municipalities to remove Confederate monuments and flags from public places because of their racist symbolism and historical connection to white-supremacy movements. SCV began installing large Confederate battle flags or "mega flags" on private property overlooking major highways, a project they called "Flags Across the Carolinas". In January 2018, the North Carolina chapter vowed to install one flag in every county. Antiracist activists, such as Roland Stanton, criticized the project. Stanton, president of the Durham branch of the North Carolina chapter of National Association for the Advancement of Colored People (NAACP), said the Confederate flag: "is a symbol of oppression, genocide and slavery". Stanton described the project as "abominable and shameful", while acknowledging that the mega flag project activities were protected by the First Amendment.[39]

In June 2020, a plane with a Confederate flag banner reading "Defund NASCAR" was flown over Talladega Superspeedway during the 2020 GEICO 500, protesting NASCAR's recent decision to ban the display of the flag during its events. Sons of Confederate Veterans took credit for the flyover, arguing that NASCAR's actions were a "slandering of our Southern heritage", and "nothing less than trampling upon Southerners' First Amendment Right of free expression".[40][41]

SCV has a longstanding and mildly friendly relationship with the Sons of Union Veterans of the Civil War (SUVCW). The Commander-in-Chief of the SUVCW has attended the SCV annual reunions on multiple occasions, including in 1995, 1996, 1997, 2005, and 2017.[42][43][44] The SUVCW cooperates with the SCV in preserving American Civil War graves, monuments, and markers.[45]

The General Headquarters of SCV operates the National Confederate Museum at the Elm Springs in Columbia, Tennessee, and the Nathan Bedford Forrest Boyhood Home in Chapel Hill.[46]

Main article: List of members of the Sons of Confederate Veterans

Notable members of the Sons of Confederate Veterans have included:

Retrieved from "https://en.wikipedia.org/w/index.php?title=Sons_of_Confederate_Veterans&oldid=969713837"
Categories:
Hidden categories:
The article is a derivative under the Creative Commons Attribution-ShareAlike License. A link to the original article can be found here and attribution parties here. By using this site, you agree to the Terms of Use. Gpedia Ⓡ is a registered trademark of the Cyberajah Pty Ltd.