The South Asian Association for Regional Cooperation (SAARC) is the regional intergovernmental organization and geopolitical union of states in South Asia. Its member states are Afghanistan, Bangladesh, Bhutan, India, the Maldives, Nepal, Pakistan and Sri Lanka. The SAARC comprises 3% of the world's area, 21% of the world's population and 4.21% (US$3.67 trillion)[3] of the global economy, as of 2019.

The SAARC was founded in Dhaka on 8 December 1985.[4] Its secretariat is based in Kathmandu, Nepal. The organization promotes development of economic and regional integration.[5] It launched the South Asian Free Trade Area in 2006.[6] The SAARC maintains permanent diplomatic relations at the United Nations as an observer and has developed links with multilateral entities, including the European Union. 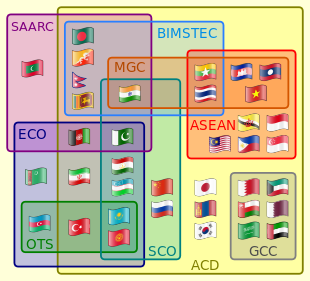 In the ending years of the 1970s, the seven inner South Asian nations that included Bangladesh, Bhutan, India, the Maldives, Nepal, Pakistan, and Sri Lanka agreed upon the creation of a trade bloc and to provide a platform for the people of South Asia to work together in a spirit of friendship, trust, and understanding. President Ziaur Rahman later addressed official letters to the leaders of the countries of the South Asia, presenting his vision for the future of the region and the compelling arguments for region.[8] During his visit to India in December 1977, Rahman discussed the issue of regional cooperation with the Indian Prime Minister, Morarji Desai. In the inaugural speech to the Colombo Plan Consultative Committee which met in Kathmandu also in 1977, King Birendra of Nepal gave a call for close regional cooperation among South Asian countries in sharing river waters.[9]

After the USSR's intervention in Afghanistan, the efforts to establish the union was accelerated in 1979 and the resulting rapid deterioration of South Asian security situation.[9] Responding to Rahman and Birendra's convention, the officials of the foreign ministries of the seven countries met for the first time in Colombo in April 1981.[9] The Bangladeshi proposal was promptly endorsed by Nepal, Sri Lanka, Bhutan, and the Maldives but India and Pakistan were sceptical initially.[9] The Indian concern was the proposal's reference to the security matters in South Asia and feared that Rahman's proposal for a regional organisation might provide an opportunity for new smaller neighbours to re-internationalize all bilateral issues and to join with each other to form an opposition against India. Pakistan assumed that it might be an Indian strategy to organize the other South Asian countries against Pakistan and ensure a regional market for Indian products, thereby consolidating and further strengthening India's economic dominance in the region.[9]

However, after a series of diplomatic consultations headed by Bangladesh between South Asian U.N. representatives at the UN headquarters in New York, from September 1979 to 1980, it was agreed that Bangladesh would prepare the draft of a working paper for discussion among the foreign secretaries of South Asian countries.[9] The foreign secretaries of the inner seven countries again delegated a Committee of the Whole in Colombo in September 1981, which identified five broad areas for regional cooperation. New areas of co-operation were added in the following years.[10]

In 1983, the international conference held in Dhaka by its Ministry of Foreign Affairs, the foreign ministers of the inner seven countries adopted the Declaration on South Asian Association Regional Cooperation (SAARC) and formally launched the Integrated Programme of Action (IPA) initially in five agreed areas of cooperation namely, Agriculture; Rural Development; Telecommunications; Meteorology; and Health and Population Activities.[11]

Officially, the union was established in Dhaka with Kathmandu being the union's secretariat-general.[12] The first SAARC summit was held in Dhaka on 7–8 December 1985 and hosted by the President of Bangladesh Hussain Ershad.[13] The declaration signed by King of Bhutan Jigme Singye Wangchuk, President of Pakistan Zia-ul-Haq, Prime Minister of India Rajiv Gandhi, King of Nepal Birendra Shah, President of Sri Lanka JR Jayewardene, and President of Maldives Maumoon Gayoom.[13]

Economic data is sourced from the International Monetary Fund, current as of December 2019, and is given in U.S. dollars.[14]

The SAARC was founded by seven states in 1985. In 2005, Afghanistan began negotiating their accession to SAARC and formally applied for membership on the same year.[24][25] The issue of Afghanistan joining SAARC generated a great deal of debate in each member state, including concerns about the definition of South Asian identity because Afghanistan is a Central Asian country.[26]

The SAARC member states imposed a stipulation for Afghanistan to hold a general election; the non-partisan elections were held in late 2005.[26] Despite initial reluctance and internal debates, Afghanistan joined the SAARC as its eighth member state in April 2007.[26][27]

On 2 August 2006, the foreign ministers of the SAARC countries agreed in principle to grant observer status to three applicants;[34] the U.S. and South Korea (both made requests in April 2006),[34] as well as the European Union (requested in July 2006).[35] On 4 March 2007, Iran requested observer status,[36] followed shortly by Mauritius. 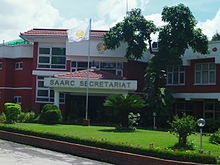 Secretariat of the South Asian Association for Regional Cooperation in Kathmandu, Nepal

The SAARC Secretariat was established in Kathmandu on 16 January 1987 and was inaugurated by the late King Birendra Bir Bikram Shah of Nepal.[43]

The SAARC Member States have created the following Specialized Bodies of the SAARC in the Member States which have special mandates and structures different from the Regional Centers. These bodies are managed by their respective Governing Boards composed of representatives from all the Member States, the representative of H.E. Secretary-General of the SAARC and the Ministry of Foreign/External Affairs of the Host Government. The heads of these Bodies act as Member Secretary to the Governing Board which reports to the Programming Committee of the SAARC.

The SAARC Secretariat is supported by following Regional Centres established in the Member States to promote regional co-operation. These Centres are managed by Governing Boards comprising representatives from all the Member States, SAARC Secretary-General and the Ministry of Foreign/External Affairs of the Host Government. The Director of the Centre acts as Member Secretary to the Governing Board which reports to the Programming Committee. After 31 December 2015, there 6 regional centers were stopped by unanimous decision. These are SMRC, SFC, SDC, SCZMC, SIC, SHRDC.[44]

The SAARC does not have an official anthem like some other regional organizations (e.g. ASEAN).[45]

The SAARC has six Apex Bodies,[46] they are:

Esala Weerakoon is the current Secretary General of SAARC.

The SAARC also has about 18 recognized bodies.[48]

The South Asian Association of Regional Cooperation (SAARC) Disaster Management Centre (SDMC-IU) has been set up at Gujarat Institute of Disaster Management (GIDM) Campus, Gandhinagar, Gujarat, India. Eight Member States, i.e., Afghanistan, Bangladesh, Bhutan, India, Maldives, Nepal, Pakistan and Sri Lanka are expected to be served by the SDMC (IU). It is entrusted with the responsibility of serving Member States by providing policy advice, technical support on system development, capacity building services and training for holistic management of disaster risk in the SAARC region. The centre also facilitates exchange of information and expertise for effective and efficient management of disaster risk.

Lasting peace and prosperity in South Asia has been elusive because of the various ongoing conflicts in the region. Political dialogue is often conducted on the margins of SAARC meetings which have refrained from interfering in the internal matters of its member states.[49] During the 12th and 13th SAARC summits, extreme emphasis was laid upon greater cooperation between the SAARC members to fight terrorism.[50][51]

The 19th SAARC summit scheduled to be held in Pakistan was called off as India, Bangladesh, Bhutan and Afghanistan decided to boycott it.[52][53] It was for the first time that four countries boycotted a SAARC summit, leading to its cancellation.[54][55]

The SAFTA was envisaged primarily as the first step towards the transition to a South Asian Free Trade Area (SAFTA) leading subsequently towards a Customs Union, Common Market and the Economic Union. In 1995, Sixteenth session of the Council of Ministers (New Delhi, 18–19 December 1995) agreed on the need to strive for the realization of SAFTA and to this end, an Inter-Governmental Expert Group (IGEG) was set up in 1996 to identify the necessary steps for progressing to a free trade area. The Tenth SAARC Summit (Colombo, 29–31 July 1998) decided to set up a Committee of Experts (COE) to draft a comprehensive treaty framework for creating a free trade area within the region, taking into consideration the asymmetries in development within the region and bearing in mind the need to fix realistic and achievable targets.

The SAFTA Agreement was signed on 6 January 2004 during Twelfth SAARC Summit held in Islamabad, Pakistan. The Agreement entered into force on 1 January 2006, and the Trade Liberalization Programme commenced from 1 July 2006. Under this agreement, SAARC members will bring their duties down to 20 percent by 2009. Following the Agreement coming into force the SAFTA Ministerial Council (SMC) has been established comprising the Commerce Ministers of the Member States.[56] In 2012 the SAARC exports increased substantially to $354.6 billion from $206.7 billion in 2009. Imports too increased from $330 billion to $602 billion over the same period. But the intra-SAARC trade amounts to just a little over 1% of SAARC's GDP. In contrast to SAARC, in ASEAN (which is actually smaller than SAARC in terms of the size of the economy) the intra-bloc trade stands at 10% of its GDP.

The SAARC Visa Exemption Scheme was launched in 1992. The leaders at the Fourth Summit (Islamabad, 29–31 December 1988), realizing the importance of people-to-people contact among SAARC countries, decided that certain categories of dignitaries should be entitled to a Special Travel document. The document would exempt them from visas within the region. As directed by the Summit, the Council of Ministers regularly kept under review the list of entitled categories.

The Visa Stickers are issued by the respective Member States to the entitled categories of that particular country. The validity of the Visa Sticker is generally for one year. The implementation is reviewed regularly by the Immigration Authorities of SAARC Member States.[60]

The SAARC Award consists of a gold medal, a letter of citation, and cash prize of $25,000. Since the institution of the SAARC Award in 2004, it has been awarded only once and the Award was posthumously conferred upon the late President Ziaur Rahman of Bangladesh.[61]

The SAARC Literary Award is an annual award conferred by the Foundation of SAARC Writers and Literature (FOSWAL) since 2001[62][63] which is an apex SAARC body.[64] Shamshur Rahman, Mahasweta Devi, Jayanta Mahapatra, Abhi Subedi, Mark Tully, Sitakant Mahapatra, Uday Prakash, Suman Pokhrel and Abhay K are some of the prominent recipients of this award.[65]

Nepali poet, lyricist, and translator Suman Pokhrel is the only poet/writer to get this award twice.[66]

The SAARC Youth Award is awarded to outstanding individuals from the SAARC region. The award is notable because of the recognition it gives to the Award winner in the SAARC region. The award is based on specific themes which apply to each year. The award recognizes and promotes the commitment and talent of the youth who give back to the world at large through various initiatives such as Inventions, Protection of the Environment and Disaster relief. The recipients who receive this award are ones who have dedicated their lives to their individual causes to improve situations in their own countries as well as paving a path for the SAARC region to follow. The Committee for the SAARC Youth Award selects the best candidate based on his/her merits and their decision is final.[67]

Secretaries-General of the SAARC

Retrieved from "https://en.wikipedia.org/w/index.php?title=South_Asian_Association_for_Regional_Cooperation&oldid=971517769"
Categories:
Hidden categories:
The article is a derivative under the Creative Commons Attribution-ShareAlike License. A link to the original article can be found here and attribution parties here. By using this site, you agree to the Terms of Use. Gpedia Ⓡ is a registered trademark of the Cyberajah Pty Ltd.