The Soviet Antarctic Expedition (SAE or SovAE) (Russian: Советская антарктическая экспедиция, САЭ, Sovyetskaya antarkticheskaya ekspeditziya) was part of the Arctic and Antarctic Research Institute of the Soviet Committee on Antarctic Research of the Academy of Sciences of the USSR.

The Soviet Union's Ministry of Sea Transport was responsible for the administration, logistics and supply of the expeditions.

The first Soviet contact with Antarctica was in January 1947 when the Slava whaling flotilla began whaling in Antarctic waters.

The first Soviet Antarctic station, Mirny, was established near the coast on February 13, 1956. This was added to in December 1957 by another station, Vostok built inland near the south geomagnetic pole. 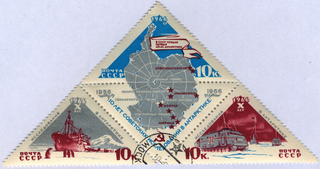 List of stations in use during the International Geophysical Year.

Main article: List of Antarctic expeditions by the Soviet Union

The Soviet Union engaged in expeditions to Antarctica from 1955 to its dissolution. After this, the Soviet Antarctic stations were taken over by Russia.

Retrieved from "https://en.wikipedia.org/w/index.php?title=Soviet_Antarctic_Expedition&oldid=913081901"
Categories:
Hidden categories:
The article is a derivative under the Creative Commons Attribution-ShareAlike License. A link to the original article can be found here and attribution parties here. By using this site, you agree to the Terms of Use. Gpedia Ⓡ is a registered trademark of the Cyberajah Pty Ltd.