The Panama-California Exposition of 1915 in San Diego, highlighting the work of architect Bertram Goodhue, is credited with giving the style national exposure. Embraced principally in California and Florida, the Spanish Colonial Revival movement enjoyed its greatest popularity between 1915 and 1931.

Today, tract home design in Southern California and Florida largely descends from the early movement. The iconic terracotta shingles and stucco walls have been standard design of new construction in these regions from the 1970s to present. 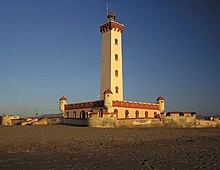 Lighthouse of La Serena, Chile, was built in 1950 as part of Gabriel González Videla's Plan Serena that introduced a neocolonial theme to the city centre

The antecedents of the Spanish Colonial Revival Style can be traced to the Mediterranean Revival architectural style. For St. Augustine, Florida (a former Spanish colony), three northeastern architects, New Yorkers John Carrère and Thomas Hastings of Carrère and Hastings and Bostonian Franklin W. Smith, designed grand, elaborately detailed hotels in the Mediterranean Revival and Spanish Revival styles in the 1880s. With the advent of the Ponce de Leon Hotel (Carrère and Hastings, 1882), the Alcazar Hotel (Carrère and Hastings, 1887) and the Casa Monica Hotel (later Hotel Cordova) (Franklin W. Smith, 1888) thousands of winter visitors to 'the Sunshine State' began to experience the charm and romance of Spanish influenced architecture. These three hotels were influenced not only by the centuries-old buildings remaining from the Spanish rule in St. Augustine but also by The Old City House, constructed in 1873 and still standing, an excellent example of early Spanish Colonial Revival architecture.

The possibilities of the Spanish Colonial Revival Style were brought to the attention of architects attending late 19th and early 20th centuries international expositions. For example, California's Mission Revival style Pavilion in white stucco at the World's Columbian Exposition of 1893 in Chicago,[2] and the Mission Inn, along with the Electric Tower of the Pan-American Exposition in Buffalo in 1900[3] introduced the potential of Spanish Colonial Revival. They also integrated porticoes, pediments and colonnades influenced by Beaux Arts classicism as well.

By the early years of the 1910s, architects in Florida had begun to work in a Spanish Colonial Revival style. Frederick H. Trimble's Farmer's Bank in Vero Beach, completed in 1914, is a fully mature early example of the style. The city of St. Cloud, Florida, espoused the style both for homes and commercial structures and has a fine collection of subtle stucco buildings reminiscent of colonial Mexico. Many of these were designed by architectural partners Ida Annah Ryan and Isabel Roberts. Another significant example of the emerging popularity of Spanish Colonial Revival can be seen in the architecture of south Florida's Coral Gables, a planned city established in the 1920s that prominently incorporates the style.

The major location of design and construction in the Spanish Colonial Revival style was California, especially in the coastal cities. In 1915 the San Diego Panama-California Exposition, with architects Bertram Goodhue and Carleton Winslow Sr., popularized the style in the state and nation. It is best exemplified in the California Quadrangle, built as the grand entrance to that Exposition. In the early 1920s, architect Lilian Jeannette Rice designed the style in the development of the town of Rancho Santa Fe in San Diego County. The city of Santa Barbara adopted the style to give it a unified Spanish character after widespread destruction in the 1925 Santa Barbara earthquake. The County Courthouse, designed by William Mooser III, is a prime example. Real estate developer Ole Hanson favored the Spanish Colonial Revival style in his founding and development of San Clemente, California in 1928. The Pasadena City Hall by John Bakewell, Jr. and Arthur Brown, Jr. , the Sonoma City Hall, and the Beverly Hills City Hall by Harry G. Koerner and William J. Gage are other notable civic examples in California. Between 1922 and 1931, architect Robert H. Spurgeon constructed 32 Spanish colonial revival houses in Riverside and many of them have been preserved. 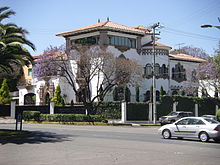 The Spanish Colonial Revival of Mexico has a distinct origin from the style developed in the United States. Following the Mexican Revolution, there was a wave of nationalism that emphasized national culture, including in architecture. The neocolonial style arose as a response to European eclecticism (favored during the Porfiriato). The 1915 book La patria y la arquitectura nacional by Federico Mariscal was influential in advocating viceregal architecture as integral to national identity.[4] During the government of President Venustiano Carranza (serving 1917 to 1920), tax exemptions were offered to those that built houses in a colonial style.[5] In the early 1920s there was a surge of houses built with Plateresque elements; such as grotesques, pinnacles and mixtilinear arches.[5]

Secretary of Education José Vasconcelos (who shaped the cultural philosophy of the post-Revolution government) was an active promoter of neocolonial architecture.[6] Traditional materials such as tezontle, cantera and Talavera tiles were incorporated into neocolonial buildings.[5]

The colonial-era National Palace was significantly altered between 1926 and 1929: the addition of a third floor and changes to the facade. The modifications were done in a manner corresponding to the original style. Similarly, the colonial Mexico City government building was remodeled in the 1920s and a neocolonial companion building was built in the 1940s.

The style, as developed in the United States, came full circle to its geographic point of inspiration as in the late 1930s, single-family houses were built in Mexico City's then-new upscale neighborhoods in what is known in Mexico as colonial californiano (Californian Colonial). That is, a Mexican reinterpretation of the California interpretation of Spanish Colonial Revival.[7] Many houses of this style can still be seen in the Colonia Nápoles, Condesa, Polanco and Lomas de Chapultepec areas of Mexico City, and the Pasaje Polanco shopping court is an outstanding example of its application in commercial architecture.

After colonial rule by Spain for over 300 years, and for the most part being administered under the province of New Spain (Mexico), the Philippines received Iberian and Latin-American influences in its architecture. By the time the United States conquered the Philippines, the Mission-style and Spanish Colonial Revival architecture also arrived, with inspirations from California. American architects further developed this style in the Philippines, given the Philippines' Spanish heritage, but at the same time modernizing the buildings with American amenities.

The best example of the Spanish Colonial Revival architecture and California mission style is the famed Manila Hotel designed by William E. Parsons and built in 1909. Other examples exist throughout the country such as Gota de Leche, Paco Market, and thousands more, especially in the churches and cathedrals throughout the country.

Influential Australian architects such as Emil Sodersten and Professor Leslie Wilkinson brought back styles from Italy and Spain in the early 20th century, convinced that Mediterranean styles would be well-suited for the Australian climate and lifestyle. Mediterranean style became popular in places like Sydney suburbs Manly and Bondi in the 1920s and 1930s. One variant, known as Spanish Mission or Hollywood Spanish, became popular as Australians saw films of and read in magazines about the glamorous mansions in that style that Hollywood movie stars had. Spanish mission houses began to appear in the wealthier suburbs, the most famous being Boomerang, at Elizabeth Bay.[8][9] The Plaza Theatre in Sydney is a celebrated cinema in the style.

In the 1930s, numerous houses in Spanish Revival style were built in Shanghai, particularly in the former French Concession. Although Shanghai was not culturally linked to the Spanish-speaking world, these buildings were probably inspired by Hollywood movies, which were highly influential in the city at the time. Local architectural magazines of the period like The Chinese Architect and The Builder regularly printed detailed examples of the style for local builders to copy and implement.

Spanish Colonial Revival architecture shares some elements with the earlier Mission Revival style derived from the architecture of the California missions, and Pueblo Revival style from the traditional Puebloan peoples in New Mexico. Both precedents were popularized in the Western United States by the Fred Harvey and his Atchison, Topeka and Santa Fe Railway Depots and Hotels. The Spanish Colonial Revival style is also influenced by the American Craftsman style and Arts and Crafts Movement.

Spanish Colonial Revival architecture is characterized by a combination of detail from several eras of Spanish Baroque, Spanish Colonial, Moorish Revival and Mexican Churrigueresque architecture, the style is marked by the prodigious use of smooth plaster (stucco) wall and chimney finishes, low-pitched clay tile, shed, or flat roofs, and terracotta or cast concrete ornaments. Other characteristics typically include small porches or balconies, Roman or semi-circular arcades and fenestration, wood casement or tall, double–hung windows, canvas awnings, and decorative iron trim.

One of the most accomplished architects of the style was George Washington Smith who practiced during the 1920s in Santa Barbara, California. His own residences El Hogar (1916, a.k.a. Casa Dracaena) and Casa del Greco (1920) brought him commissions from local society in Montecito and Santa Barbara. An example landmark house he designed is the Steedman estate Casa del Herrero in Montecito, now a registered National Historic Landmark and restored historic house—landscape museum. Other examples are the Jackling House and Lobero Theatre also in California.

In Florida notable architects include:[10] 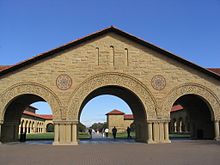 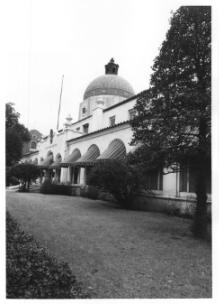 Retrieved from "https://en.wikipedia.org/w/index.php?title=Spanish_Colonial_Revival_architecture&oldid=974845697"
Categories:
Hidden categories:
The article is a derivative under the Creative Commons Attribution-ShareAlike License. A link to the original article can be found here and attribution parties here. By using this site, you agree to the Terms of Use. Gpedia Ⓡ is a registered trademark of the Cyberajah Pty Ltd.