The Spanish East Indies[a] were the overseas territories of the Spanish Empire in Asia and Oceania from 1565 to 1901 governed from Manila in the Spanish Philippines. The seat of government was in the Spanish Philippines and it encompassed the Marianas, Carolines, Palaos and Guam, as well as parts of Formosa (Taiwan), Sulawesi (Celebes) and the Moluccas (Maluku). The King of Spain traditionally styled himself "King of the East and West Indies".[b]

The Spanish East Indies were ruled from the Captaincy General of the Philippines which included present-day Philippines, Guam and the Mariana Islands, as well as Palau, part of Micronesia and for a brief period Northern Taiwan. Cebu was the first seat of government, later transferred to Manila. From 1565 to 1821 these territories, together with the Spanish West Indies, were administered through the Viceroyalty of New Spain based in Mexico City. After Mexican independence, they were ruled directly from Madrid.

Reception of the Manila Galleon by the Chamorro in the Ladrones Islands, ca. 1590 Boxer Codex

Spanish contact began on 6 March 1521, when a Spanish expedition led by Ferdinand Magellan reached the Mariana Islands. He named Guam and the other islands "Islas de los Ladrones" (Islands of the Thieves) because the natives came aboard his galleon (the Trinidad) and pilfered many of its supplies. The expedition later continued its journey west and reached the island of Homonhon in the eastern Philippines on 16 March, with only 150 crewmen. There they were able to communicate with the local peoples because the Malayan interpreter, Enrique of Malacca, could understand their language. The expedition took them further into the archipelago to the Visayan island of Cebu, where Magellan's chaplain, Pedro Valderrama, baptised the local monarch Rajah Humabon, his chief consort, and his subjects.

Routes of early Spanish expeditions in the Philippines.

Seeking to develop trade between the East Indies and the Americas across the Pacific Ocean, Antonio de Mendoza encouraged the exploration of these Asian territories and commissioned the expedition of Ruy López de Villalobos to the Philippines in 1542–1543. Miguel López de Legazpi set out from Mexico, and established the first Spanish settlement in the Philippines in 1565, which became the town of San Miguel in present-day Cebu. That same year, another member of the expedition, Andrés de Urdaneta discovered a maritime route from the Philippines to Mexico, across the Pacific, leading to the important transpacific trade link of the Manila-Acapulco Galleons. In 1571, Manila was captured from the Sultanate of Brunei and then Manila was made the seat of the Spanish Captaincy General of the Philippines. These and other Asian territories claimed by the Spanish crown were to be governed from the Viceroyalty of New Spain in Mexico City.

The Manila-Acapulco galleons shipped products gathered from both Asia-Pacific and the Americas, such as silk, spices, silver, gold and other Asian-Pacific islander products to Mexico. Products brought from Asia-Pacific were sent to Veracruz and shipped to Spain and, via trading, to the rest of Europe, while Spanish-Mexican navigators brought with them Hispanic and indigenous Mexican customs, religion, languages, foods, and cultural traditions to the Philippines, Guam, and the Mariana Islands.

In 1606, the Spaniards established trade links with the Maluku Islands, which continued until 1663. Contacts with Japan were also established and Sebastián Vizcaíno was sent as ambassador in 1611, until Japan closed its trading post in 1630. In northeastern Taiwan, the Spaniards built Fort Santo Domingo near Keelung in 1626 and a mission in Tamsui in 1628, which they occupied until they lost in the Second Battle of San Salvador. Several Pacific islands were visited by Spanish ships in the 16th century, including New Guinea (Yñigo Ortiz de Retez in 1545), the Solomon Islands (Pedro Sarmiento de Gamboa in 1568), and the Marquesas Islands (Álvaro de Mendaña de Neira in 1595), but they made no effort to trade with or colonize them.

In 1668, Blessed Diego Luis de San Vitores established the first mission on Guam, where he and Saint Pedro Calungsod were later martyred.

In 1762 British troops briefly captured the city of Manila during the Seven Years' War. However, they were unable to establish control over areas outside Manila—through the efforts of the Spanish lieutenant governor, Simón de Anda y Salazar, the remainder of the islands remained loyal to Spain. The British promised support for an uprising led by Diego Silang and his wife Gabriela but the British force never materialized. Under the peace settlement Manila was exchanged, along with British-occupied Havana, for Florida and Menorca. Manila was ceded back to Spanish authorities in April 1764.

The Seven Years' War prompted Charles III to initiate extensive governmental reforms throughout the overseas possessions. An intendencia was established in Manila in 1784 to handle the government finances and to promote the economy. (The plan to introduce more intendencias throughout the Philippines did not materialize.) In a similar vein, to promote innovation and education among the residents of the islands, Governor-General José Basco y Vargas established the Economic Society of the Friends of the Country.

For over 256 years, the Spanish East Indies were governed by a governor-captain general, and an audiencia. All economic matters of the Philippines were managed by the Viceroyalty of New Spain, located in Mexico. Because the eastward route was more widely used for military purposes, in addition to commerce that included the Manila-Acapulco galleon trade, most government correspondence went through Mexico, rather than directly to Spain (with the exception of a short period at the end of the 18th century).

In 1821 the New Spanish Viceroyalty collapsed following the Mexican War of Independence, which resulted in the First Mexican Empire. All control of the Spanish East Indies government was then transferred to Madrid, until the United States annexed most Spanish territories in the Asia-Pacific region after the Spanish–American War of 1898.

The Audiencia and Captaincy General

Main articles: Captaincy General of the Philippines and Royal Audience of Manila

In 1574 the Captaincy General of the Philippines was created as a dependency of the Viceroyalty of New Spain. The Real Audiencia of Manila was created on 5 May 1583 and established in 1584 as the highest tribunal of the Spanish Empire in the East Indies, that had the Governor-General of the Philippines as its ex officio highest judge. Both institutions were created by Royal Decree from King Felipe II

Law XI (Audiencia y Chancillería Real de Manila en las Filipinas) of Title XV (De las Audiencias y Chancillerias Reales de las Indias) of Book II of the Recopilación de Leyes de los Reynos de las Indias of 1680—which compiles the original decree and the one of 25 May 1596—describes the limits and functions of the Audiencia and its president.[3]

"In the city of Manila on the Island of Luzon, Head of the Philippines, shall reside another Royal Audiencia and Chancellery of ours, with a president, who shall be governor and captain general; four judges of civil cases [oidores], who will also be judges of criminal cases [alcaldes del crimen]; a crown attorney [fiscal]; a bailiff [alguacil mayor]; a lieutenant of the Gran Chancellor; and the other necessary ministers and officials; and which shall have for district said Island of Luzon, and the rest of the Philippines, the Archipelago of China, and its Mainland, discovered and to be discovered. And we order that the governor and captain general of said Islands and Provinces, and president of their Royal Audiencia, have exclusively the superior government of the entire district of said Audiencia in war and peace, and shall make provisions and favors in our Royal Name, which in conformity to the laws of this Compilation and the rest of the Kingdoms of Castile and the instructions and powers that We shall grant, he should and can do; and in gubernatorial matters and cases that shall arise, that are of importance, said president-governor should consult on them with the judges of said Audiencia, so that they give their consultive opinions, and having heard them, he should provide the most convenient to the service of God and ours and the peace and tranquility of said Province and Republic". 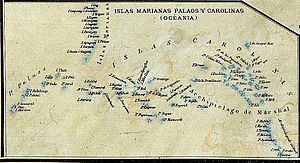 The Spanish East Indies came to be defined as:[citation needed]

The Spanish used several names that are not currently used. Gran Moluca (Great Molluccas) for the island of Mindanao and Nueva Castilla (New Castile) for Luzon.

Because Spanish interest in the region was primarily focused on its use as a base for trade with East Asia, direct Spanish control over the area expanded slowly. The Batanes Islands were conquered in the 18th century by José Basco. The highlands of Luzon remained outside Spanish control until the early 19th century, and the southernmost tip of Palawan, not until the late 1890s. The rest of Mindanao (Caesarea Karoli)—aside from outposts in Northern Mindanao, Zamboanga, Cotabato, and the islands of Basilan and Jolo, the rest was nominally under Spanish control, recognizing Spanish rule, but left to administer their own affairs, as in the cases of the Sulu, and the Maguindanao sultanates, as well as a number of other Lumad tribes not affiliated with either. Similarly, Palau and the vast majority of the Caroline Islands were not governed by Spanish missions until the early 19th century.

Spain's influence on its former territories in Asia-Pacific is significant to this day. The majority of the people of the Philippines, Guam and the Mariana Islands belong to the Roman Catholic faith which was introduced by Spanish missionaries in the 16th and 17th centuries. A large part of the population in these countries use Spanish names and surnames. Also, because of the introduction of new tools, products, crops and technology by Spaniards and Mexicans in the three centuries of colonial rule, many Spanish loanwords entered the native languages of these countries. Art forms such as music, architecture and fashion also have much Spanish influence. The national cuisines of these countries also have Mexican and Spanish elements. In terms of ethnicity, the inhabitants of these territories (1/3rd of Luzon island's population and port-cities and military outposts, mainly Iloilo, Cebu, Legaspi, Vigan and Zamboanga etc.) are descendants of Latin American and Spanish settlers. These descendants of mixed heritage are known as mestizos.

A sizeable proportion of the current population of the Northern Marianas Islands (45–55%) and Guam (30–45%), as well as that of Palau (15–25%) is of Filipino descent. Some of the local peoples in the previously stated territories also use Filipino names and surnames (one example is the surname Pangelinan, which comes from the Filipino surname Pangilinan). The current Chamorro population is believed to be partly of Filipino descent, both because of the historic links between Guam, and the Northern Mariana Islands and the Philippines during Spanish rule, and currently through different waves of migration.[4] The cuisines of Guam, the Northern Mariana Islands, and Palau are also heavily influenced by Filipino cuisine, with dishes like Pancit, Lumpia, Kelaguen, Halo-halo and Okoy being the most noticeable.

Retrieved from "https://en.wikipedia.org/w/index.php?title=Spanish_East_Indies&oldid=962635883"
Categories:
Hidden categories:
The article is a derivative under the Creative Commons Attribution-ShareAlike License. A link to the original article can be found here and attribution parties here. By using this site, you agree to the Terms of Use. Gpedia Ⓡ is a registered trademark of the Cyberajah Pty Ltd.