Spanish Formosa (Spanish: Formosa Española) was a small colony of the Spanish Empire established in the northern tip of the island known to Europeans at the time as Formosa (now Taiwan) from 1626 to 1642. It was ceded to the Dutch Republic during the Eighty Years' War.

The Portuguese were the first Europeans to reach the island off the southern coast of China in 1544, and named it Formosa (Portuguese for "beautiful") due to the beautiful landscape as seen from the sea.[1]

Northern Taiwan became a Spanish colony in 1626 and part of the Manila-based Spanish East Indies. As a Spanish colony, it was meant to protect the regional trade with the Philippines from interference by the Dutch base in the south of the island. The colony was short-lived due to the loss of its strategic importance and unwillingness by Spanish authorities in Manila to commit more resources to its defense. After seventeen years, the last fortress of the Spanish was besieged by Dutch forces and eventually fell, giving the Dutch control over much of the island.

In 1566, the Dutch rebels rose against King Philip II in Hapsburg Netherlands. The Dutch Republic and its allies, England and France attacked and looted some of Spain's overseas territories, as part of the Eighty Years' War.

The Spanish cut the Dutch rebels off from the spice trade based in Lisbon, making it necessary for the Dutch to send their own expeditions to the sources of these commodities to take control of the much desired spice trade in the East Indies.

The Dutch colonization of Formosa was part of the unsuccessful campaign to seize the possessions of the Spanish Habsburgs in Asia, including the Philippines. The Dutch began to attack a string of often undermanned coastal fortresses that comprised the Habsburg's Portuguese African and Asian possessions. The settlements were sometimes isolated, difficult to reinforce if attacked, and prone to being picked off one by one. However, the Dutch were mostly unsuccessful in these attempts.[2]

Pursuing their quest for alternative routes to Asia for trade, the first Dutch privateer squadron to reach the Philippines on 14 December 1600 was led by pirate Olivier van Noort. The Dutch sought to dominate the commercial sea trade in Southeast Asia, often engaging in piracy and privateering. They attempted to disrupt trade by harassing the coasts of Manila Bay and its environs, and preyed on sampans and junks from China and Japan trading at Manila.

In the context of this competition for trade, the Dutch established a colony at Tayouan, present-day Anping, in the south of Formosa. From there they tried threaten Spain's trade in the region. As a counter to this threat, the Spanish colonial authorities in Manila decided to establish their own colony in the north of the island.

Map of Spanish Empire (and Portuguese Empire) including Spanish Formosa 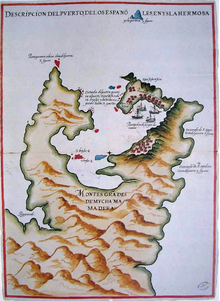 Landing at Cape Santiago in the north-east of Formosa but finding it unsuitable for defensive purposes, the Spanish continued westwards along the coast until they arrived at Keelung.[3] A deep and well-protected harbour plus a small island in the mouth of the harbour made it the ideal spot to build the first settlement, which they named Santissima Trinidad. Forts were built, both on the island and in the harbour itself.

In 1629 the Spanish erected a second base, centered on Fort San Domingo, in Tamsui.[4]

First battle with the Dutch

In 1641, the Spanish colony in the north had become such an irritant to the Dutch in the south that they decided to take northern Formosa by force. This attempt would prove a failure. In courteous terms, the Dutch Governor Paulus Traudenius informed the Spanish governor of their intentions.

Sir,
I have the honor to communicate to you that I have received the command of a considerable naval and military force with the view of making me master by civil means or otherwise of the fortress Santissima Trinidad in the isle of Ke-lung of which your Excellency is the Governor.
In accordance with the usages of Christian nations to make known their intentions before commencing hostilities, I now summon your Excellency to surrender. If your Excellency is disposed to lend an ear to the terms of capitulation which we offer and make delivery to me of the fortress of Santissima Trinidad and other citadels, your Excellency and your troops will be treated in good faith according to the usages and customs of war, but if your Excellency feigns to be deaf to this command there will be no other remedy than recourse to arms. I hope that your Excellency will give careful consideration to the contents of this letter and avoid the useless effusion of blood, and I trust that without delay and in a few words you will make known to me your intentions.
May God protect your Excellency many years,
The Friend of your Excellency,
PAULUS TRAUDENIUS[5]

The Spanish governor was not inclined to give in so easily and replied in kind.

Sir; I have duly received your communication of August 26th, and in response I have the honor to point out to you that as becomes a good Christian who recalls the oath he has made before his king, I cannot and will not surrender the forts demanded by your Excellency, as I and my garrison have determined to defend them. I am accustomed to find myself before great armies, and I have engaged in numerous battles in Flanders as well as other countries, and so I beg of you not to take the trouble of writing me further letters of like tenor. May each one defend himself as best he can. We are Spanish Christians and God in whom we trust is our protector.
May the Lord have mercy on you.
Written in our principal fortress San Salvador the 6th of September 1641.
GONSALO PORTILIS[5]

Subsequently, the Dutch launched an assault on the northern regions held by the Spanish, but the positions were well-defended and the attacking troops were not able to breach the walls of the fortresses. They returned, thwarted and humiliated, to the Dutch base at Fort Zeelandia.

Second Battle with the Dutch

In 1642, the Spanish Governor of Manila recalled most of his Formosa troops for an expedition in the Philippines.[6] In August that year, to profit from the relatively undefended Spanish position, the Dutch returned to Keelung with four large ships, several smaller ships, and approximately 369 Dutch soldiers.[7] A combination of Spaniards, aboriginals, and Kapampangan from the Philippines held off the Dutch for six days. They eventually surrendered and were returned to Manila defeated, and giving up their flags and what little artillery remained with them.[7] Sebastián Hurtado de Corcuera, governor of the Philippines, was blamed for the loss of Formosa and was eventually tried in court for his actions.[8] Upon conviction, he was imprisoned for five years in the Philippines. Historians since Corcuera's time have chastised him for the loss of the settlement in Formosa[7] but other factors, such as limited resources in what was then a huge empire, were contributing factors.

Retrieved from "https://en.wikipedia.org/w/index.php?title=Spanish_Formosa&oldid=961093939"
Categories:
Hidden categories:
The article is a derivative under the Creative Commons Attribution-ShareAlike License. A link to the original article can be found here and attribution parties here. By using this site, you agree to the Terms of Use. Gpedia Ⓡ is a registered trademark of the Cyberajah Pty Ltd.