The Spanish Missions in New Mexico were a series of religious outposts in the Province of Santa Fe de Nuevo México — present day New Mexico. They were established by Franciscan friars under charter from the monarchs of the Spanish Empire and the government of the Viceroyalty of New Spain in a policy called Reductions to facilitate the conversion of Native Americans—Indians into Christianity. 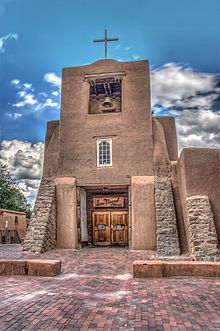 They attempted to Hispanicize the indigenous peoples. The affected included the rich cultures and tribes of: many of the 21 distinct Puebloan groups; the Tiwa; the Navajo; and the Apache. The missions also aimed to pacify resistance to the European invasion of the tribes' Pre-Columbian homelands and loss of traditions. The missions introduced European livestock, fruits, vegetables, and small-scale industry into the Southwest region. They also introduced European diseases that the native people had no immunity against.

Fray Marcos de Niza, sent by Coronado, first saw the area now known as New Mexico in 1539. The first permanent settlement was Mission San Gabriel, founded in 1598 by Juan de Oñate near what is now known as the San Juan Pueblo.[citation needed]

Noted churches that were not missions

Retrieved from "https://en.wikipedia.org/w/index.php?title=Spanish_missions_in_New_Mexico&oldid=934888948"
Categories:
Hidden categories:
The article is a derivative under the Creative Commons Attribution-ShareAlike License. A link to the original article can be found here and attribution parties here. By using this site, you agree to the Terms of Use. Gpedia Ⓡ is a registered trademark of the Cyberajah Pty Ltd.