In spatial databases and Geospatial topology the spatial relations are used for spatial analysis and constraint specifications.

In cognitive development for walk and for catch objects, or for understand objects-behaviour; in robotic Natural Features Navigation; and many other areas, spatial relations plays a central role. 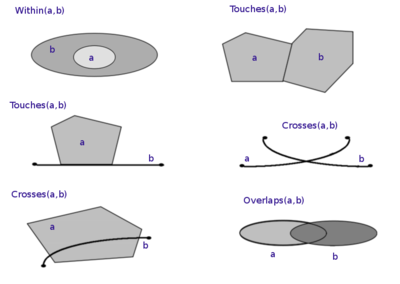 The DE-9IM model expresses important space relations which are invariant to rotation, translation and scaling transformations.

For any two spatial objects a and b, that can be points, lines and/or polygonal areas, there are 9 relations derived from DE-9IM:

Distance relations specify how far is the object away from the reference object.

Reference objects represented by a bounding box or another kind of "spatial envelope" that encloses its borders, can be denoted with the maximum number of dimensions of this envelope: 0 for punctual objects, 1 for linear objects, 2 for planar objects, 3 for volumetric objects. So, any object, in a 2D modeling, can by classified as point, line or area according to its delimitation. Then, a type of spatial relation can be expressed by the class of the objects that participate in the relation:

More complex modeling schemas can represent an object as a composition of simple sub-objects. Examples: represent in an astronomical map a star by a point and a binary star by two points; represent in geographical map a river with a line, for its source stream, and with an strip-area, for the rest of the river. These schemas can use the above classes, uniform composition classes (multi-point, multi-line and multi-area) and heterogeneous composition (points+lines as "object of dimension 1", points+lines+areas as "object of dimension 2").

Two internal components of a complex object can express (the above) binary relations between them, and ternary relations, using the whole object as a frame of reference. Some relations can be expressed by an abstract component, such the center of mass of the binary star, or a center line of the river.

Time is spatial: it requires understanding ordered sequences such as days of the week, months of the year, and seasons. A person with spatial difficulties may have problems understanding “yesterday,” “last week,” and “next month”. Time expressed digitally is just as spatial as time expressed by moving clock hands, but digital clocks remove the need to translate the hand position into numbers.

Stockdale and Possin[3] discusses the many ways in which people with difficulty establishing spatial and temporal relationships can face problems in ordinary situations.

Retrieved from "https://en.wikipedia.org/w/index.php?title=Spatial_relation&oldid=934316192"
Categories:
Hidden categories:
The article is a derivative under the Creative Commons Attribution-ShareAlike License. A link to the original article can be found here and attribution parties here. By using this site, you agree to the Terms of Use. Gpedia Ⓡ is a registered trademark of the Cyberajah Pty Ltd.