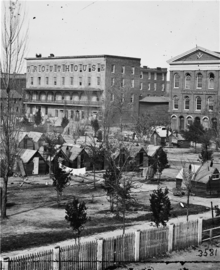 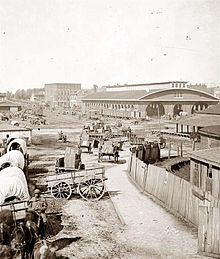 State Square and first Union Station, 1864 or before

State Square was the central square of antebellum Atlanta, Georgia. The original Atlanta Union Depot designed by Edward A. Vincent stood in the middle of the square. The square was bounded by Marietta Street (now Decatur Street) on the northeast, Pryor Street on the northwest, Loyd Street (now Central Avenue) on the southeast, and Alabama Street on the south. The square was surrounded by Atlanta's most important buildings including the hotels Atlanta, Trout House, and Washington Hall, the Atlanta Bank, retail stores, and warehouses.

The area is now almost entirely taken up by parking lots and parking garages, with a portion occupied by the Georgia State University College of Education, MARTA rail line, and retail and office space lining the north side of Alabama Street.[1]

Retrieved from "https://en.wikipedia.org/w/index.php?title=State_Square&oldid=745808716"
Categories:
Hidden categories:
The article is a derivative under the Creative Commons Attribution-ShareAlike License. A link to the original article can be found here and attribution parties here. By using this site, you agree to the Terms of Use. Gpedia Ⓡ is a registered trademark of the Cyberajah Pty Ltd.