A stream gauge, streamgage or gauging station is a location used by hydrologists or environmental scientists to monitor and test terrestrial bodies of water. Hydrometric measurements of water level surface elevation ("stage") and/or volumetric discharge (flow) are generally taken and observations of biota and water quality may also be made. The location of gauging stations are often found on topographical maps. Some gauging stations are highly automated and may include telemetry capability transmitted to a central data logging facility. 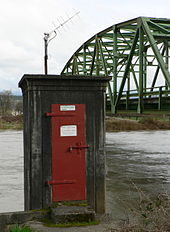 Automated direct measurement of streamflow discharge is difficult at present. In place of the direct measurement of streamflow discharge, one or more surrogate measurements can be used to produce discharge values. In the majority of cases, a stage (the elevation of the water surface) measurement is used as the surrogate. Low gradient (or shallow-sloped) streams are highly influenced by variable downstream channel conditions. For these streams, a second stream gauge would be installed, and the slope of the water surface would be calculated between the gauges. This value would be used along with the stage measurement to more accurately determine the streamflow discharge. Within the last ten years, the technological advance of velocity sensors has allowed the use of water velocity as a reliable surrogate for streamflow discharge at sites with a stable cross-sectional area. These sensors are permanently mounted in the stream and measure velocity at a particular location in the stream and related to flow in a manner similar to the use of traditional water level.

In those instances where only a stage measurement is used as the surrogate, a rating curve must be constructed. A rating curve is the functional relation between stage and discharge. It is determined by making repeated discrete measurements of streamflow discharge using a velocimeter and some means to measure the channel geometry to determine the cross-sectional area of the channel. The technicians and hydrologists responsible for determining the rating curve visit the site routinely, with special trips to measure the hydrologic extremes (floods and droughts), and make a discharge measurement by following an explicit set of instructions.

Once the rating curve is established, it can be used in conjunction with stage measurements to determine the volumetric streamflow discharge. This record then serves as an assessment of the volume of water that passes by the stream gauge and is useful for many tasks associated with hydrology.

Stream gauge B62, a combination weir at Doddieburn, on the Mzingwane River, Zimbabwe

A variety of hydraulic structures / primary device are used to improve the reliability of using water level as a surrogate for flow (improving the accuracy of the rating table), including:

Other equipment commonly used at permanent stream gauge include:

Discharge measurements of a stream or canal without an established stream gauge can be made using a current meter or Acoustic Doppler current profiler. One informal methods that is not acceptable for any official or scientific purpose, but can be useful is the float method, in which a floating object such as a piece of wood or orange peel is observed floating down the stream.[1]

Plaque marking the construction of the River Dove gauging station, dedicated to Izaak Walton, author of The Compleat Angler.

The first routine measurements of river flow in England began on the Thames and Lea in the 1880s,[2] and in Scotland on the River Garry in 1913.[3] The national gauging station network was established in its current form by the early 1970s and consists of approximately 1500 flow measurement stations supplemented by a variable number of temporary monitoring sites.[2] The Environment Agency is responsible for collection and analysis of hydrometric data in England, Natural Resources Wales in Wales, whilst responsibility for Scotland and Northern Ireland rests with the Scottish Environment Protection Agency and Rivers Agency respectively.[4]

In the United States, the U.S. Geological Survey (USGS) is the principal federal agency tasked with maintaining records of natural resources. Within the USGS, the Water Resources Division carries the responsibility for monitoring water resources.

To establish a stream gauge, USGS personnel first choose a site on a stream where the geometry is relatively stable and there is a suitable location to make discrete direct measurements of streamflow using specialized equipment. Many times this will be at a bridge or other stream crossing. Technicians then install equipment that measures the stage (the elevation of the water surface) or, more rarely, the velocity of the flow. Additional equipment is installed to record and transmit these readings (via the Geostationary Operational Environmental Satellite) to the Water Science Center office where the records are kept. The USGS has a Water Science Center office in every state within the United States. Current streamflow data from USGS streamgages may be viewed in map form at: [2].

In Zimbabwe, the national stream gauge network is the responsibility of the Zimbabwe National Water Authority. This is an extensive network covering all major rivers and catchments in the country. However, a review of existing gauges raised serious concerns about the reliability of the data of a minority of stations, due in part to ongoing funding problems.[5]

Retrieved from "https://en.wikipedia.org/w/index.php?title=Stream_gauge&oldid=950852189"
Categories:
Hidden categories:
The article is a derivative under the Creative Commons Attribution-ShareAlike License. A link to the original article can be found here and attribution parties here. By using this site, you agree to the Terms of Use. Gpedia Ⓡ is a registered trademark of the Cyberajah Pty Ltd.