Jump to navigation Jump to search
County in Kansas

Sumner County (standard abbreviation: SU) is a county located in the U.S. state of Kansas. As of the 2010 census, the population was 24,132.[1] Its county seat is Wellington.[2] 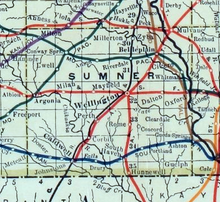 For many millennia, the Great Plains of North America was inhabited by nomadic Native Americans. From the 16th century to 18th century, the Kingdom of France claimed ownership of large parts of North America. In 1762, after the French and Indian War, France secretly ceded New France to Spain, per the Treaty of Fontainebleau. In 1802, Spain returned most of the land to France, but keeping title to about 7,500 square miles.

In 1803, most of the land for modern day Kansas was acquired by the United States from France as part of the 828,000 square mile Louisiana Purchase for 2.83 cents per acre. In 1848, after the Mexican–American War, the Treaty of Guadalupe Hidalgo with Spain brought into the United States all or part of land for ten future states, including southwest Kansas. In 1854, the Kansas Territory was organized, then in 1861 Kansas became the 34th U.S. state.

On February 26, 1867, Sumner County was created from parts of Marion County and Butler County. It was named in honor of Charles Sumner, a U.S. Senator from Massachusetts (1811–74), who was a strong advocate of Kansas becoming a free state.

In 1887, the Chicago, Kansas and Nebraska Railway built a branch line north-south from Herington to Caldwell.[3] This branch line connected Herington, Lost Springs, Lincolnville, Antelope, Marion, Aulne, Peabody, Elbing, Whitewater, Furley, Kechi, Wichita, Peck, Corbin, Wellington, Caldwell. By 1893, this branch line was incrementally built to Fort Worth, Texas. This line is called the "OKT". The Chicago, Kansas and Nebraska Railway was foreclosed in 1891 and was taken over by Chicago, Rock Island and Pacific Railway, which shut down in 1980 and reorganized as Oklahoma, Kansas and Texas Railroad, merged in 1988 with Missouri Pacific Railroad, and finally merged in 1997 with Union Pacific Railroad. Most locals still refer to this railroad as the "Rock Island".

In December 2011, the Kansas Star Casino opened approximately 4.5 miles (7.2 km) west of the center of Mulvane, adjacent to an exit on the Kansas Turnpike that was added in the mid 1980s. The casino is located a couple blocks west of the turnpike exit.[4] 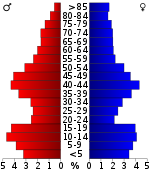 Sumner County; as like many neighbouring counties, often votes for the Republican Party in Presidential elections. However, in 1992 they voted for George H.W Bush by a margin of less than two percent. The other candidate being Ross Perot. The last time they have voted for a Democratic candidate was in 1976 by Jimmy Carter.

Sumner County is a Republican Stronghold. The Last democrat to carry this county was Jimmy Carter in 1976.

Following amendment to the Kansas Constitution in 1986, Sumner County remained a prohibition, or "dry", county until 1992, when voters approved the sale of alcoholic liquor by the individual drink with a 30 percent food sales requirement.[13] 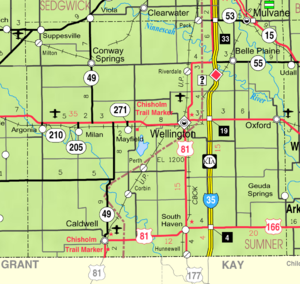 Sumner County is divided into thirty townships. The cities of Caldwell and Wellington are considered governmentally independent and are excluded from the census figures for the townships. In the following table, the population center is the largest city (or cities) included in that township's population total, if it is of a significant size.

Retrieved from "https://en.wikipedia.org/w/index.php?title=Sumner_County,_Kansas&oldid=964970795"
Categories:
Hidden categories:
The article is a derivative under the Creative Commons Attribution-ShareAlike License. A link to the original article can be found here and attribution parties here. By using this site, you agree to the Terms of Use. Gpedia Ⓡ is a registered trademark of the Cyberajah Pty Ltd.